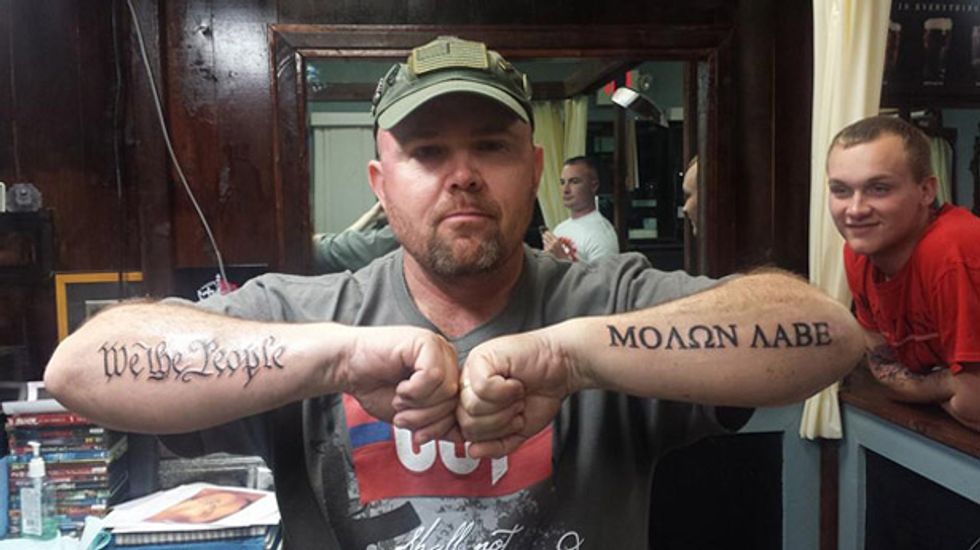 Outside of going to the gun range and blasting away at paper targets while pretending that they are Muslims or black teenagers, there is nothing Armed-Americans enjoy more than showing off their guns in public. Open carry rules!

No self-respecting NRA member would think about making a grudging late-night emergency run to CVS to pick up some tampons for his wife without first pulling on some camouflage pants, strapping a Glock to his hip, and pulling the whole ensemble together with an AR15 dangling from his neck.

Also war is hell and a man going alone into the feminine hygiene aisle without his wife providing cover can only describe it one way:

As any of America's gun enthusiasts will gladly tell you, the Founding Fathers specifically wrote, " The right of the people to keep and bear arms shall not be infringed," with today's world in mind. Except for the "black president" part. Nobody saw that one coming.

Forward thinkers that they were, they obviously did anticipate armed drugstore runs or visits to Chipotle, Wal-Mart, airports, and even Chuck E. Cheese -- in case a riot were to break out in the ball pit.

So when the owner of a popular Delaware haunted house was quite adamant that nobody -- including off-duty cops -- pack heat while visiting his attraction, gun nuts reacted as if the amusement park operator dug up Zombie Reagan and dressed him up in a Mao jacket and let people throw poop at him as part of the Halloween hi-jinks.

A week ago an off-duty Delaware cop named Nick Roll took his son to the Frightland in Middletown, Delaware -- an enormously popular East Coast attraction -- and was told that he couldn't bring his service weapon in with him. Although his hosts graciously offered to lock it up for him in lieu of him locking it away in his car, Roll demurred. He then did what all good American's do when confronted with tyranny -- he complained about it on Facebook in what is known as a "rant" that went "viral."

Roll later took that post down and posted another saying that while he disagreed with their policy, he respected the park operator's  rights on his own property, but still would pass on returning.

So nothing to see here folks, move along. Show's over.

Despite the fact that Frightland has for years donated a portion of all tickets sold and 100 percent of the parking fees to the Leukemia Research Foundation of Delaware, gun nuts were outraged (and, seriously,  when are they not?) and they vowed to stand up for freedom and the Constitution and more freedom.

Unlike the Founding Fathers they did not take up arms against their amusement park oppressors. Instead, they went on Frightland's Facebook page and "ranted" about boycotting the park -- cancer contributions be damned.

Let us now bask in the white-hot glow of their outrage:

Aaron Christolph: "@Frightland, I personally find this as a slap in the face to all those who serve. And can say with 100% certainty that you have just lost the business of several hundred families (police, military, and civilian), just here in DE. You can make what ever excuse, that make you feel comfortable, and it is 100% your right to make this as your policy. Just as it is ours to voice our disgust, with it and choose to refrain business with you."

John Walczak: "If your not 2A friendly then you will never see a dime from me . Gun free zones are the last place I wanna be and the first place criminals seek."

Jeremiah Miller:  "FZs are not safe zones at all...look how wonderfully they don't work in schools (family friendly, right?) and private establishments where shootings have occurred. All they do is disarm the law-abiding citizens, not the criminals who're intent on doing harm to others. I will absolutely speak out against ALL establishments that revoke anyone's right to be able to defend themselves and their families. Make absolutely no mistake about it, those rules are not in place to ensure the safety of their patrons at all.. they are there to limit any liability and due to insurance reasons for their business. Yeah they may have an inkling of a human concern for the general well-being of their patrons but it is not the driving factor for the rules they put in place."

Herbert Krebs: "Just don't bring your constitutional firearm with you or they will hate you and ban you for it. So all law enforcement stay away from this place. Even in an emergency let them fend for themselves. They seem to have it,under control."

James Chubb: "Was going to visit this year. Your gun free policy has made me change my mind. Thanks for saving me the expense."

Mike Richardson:  "Another 'gun free zone' what could possibly happen there?!? No thanks I'll spend my money elsewhere where I can protect my family."

Karen Wood: "Might add, you can get in there many ways, without going through that gate if you know the area and are determined. A nut who wants to create a name for himself, will be thrilled to read this. Hope your perimeter security is armed."

Rick Williamson: "Yeah, didn't expect damage control from your B.S anti Second Amendment rules! If you deny us our rights, then you don't need our money."

It is reasonable to believe that people who live in such constant mortal fear of being attacked that they can't go out to get the newspaper in the driveway without dashing for the cover of the agapanthus first, would have no need of a haunted house to get their heart racing. Going to Frightland seems like overkill... in a manner of speaking.

On the other hand, making a big show of saying you are boycotting the cancer-fundraising haunted house -- particularly when you live on the other side of the country and couldn't find Delaware on a state map of Delaware -- over guns is kind of lame.

As they like to say: The only thing that stops a cure for a bad disease is a good guy with a gun acting like a dick.