Gunfail at the OK Corral: ‘Vigilante’ shoots bystander and fellow actor during shootout stunt for tourists 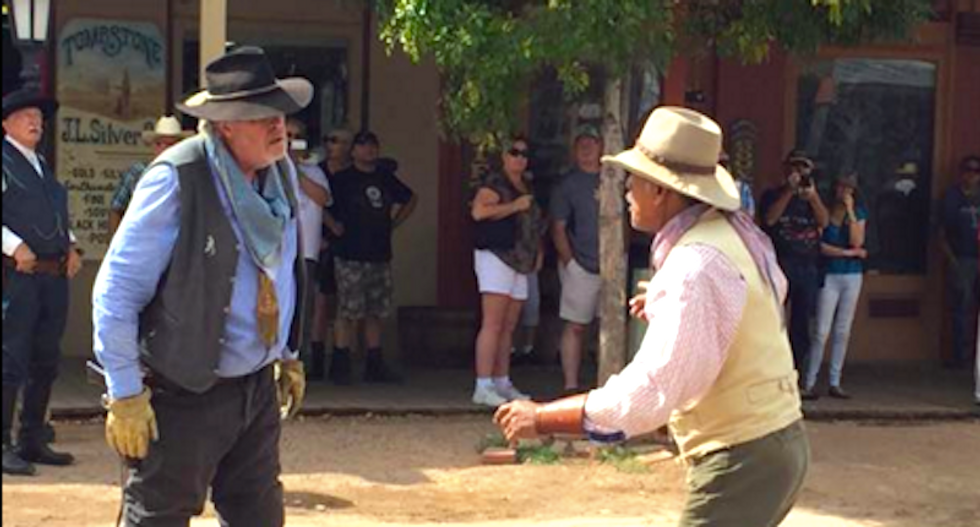 Clay Allison and John Westley Hardin, members of the Tombstone Vigilantes, face off during a re-enactment (Facebook)

One actor accidentally shot another actor and a bystander Sunday afternoon during a Wild West re-enactment in Arizona.

Tom Carter, a member of the Tombstone Vigilantes group, fired live rounds instead of blanks during a staged gunfight at the OK Corral and shot fellow actor Ken Curtis in the upper groin.

Police discovered a woman, identified as Debbie Mitchell, was struck by shrapnel while standing in front of the Bird Cage Theater, but she refused medical treatment.

Curtis underwent surgery at a Tucson hospital to have the bullet removed.

Police said Carter arrived late to the event and failed to have his gun properly inspected, and investigators determined he fired five live rounds from the cylinder and had one remaining in the weapon.

Officials insisted the shootings were an isolated incident and assured visitors that all safety protocols would be enforced before gunfight re-enactments on Allen Street.

"Tombstone takes pride in the safety and security of its townspeople and tourists alike, and the citizens of Tombstone can be assured that stringent safety protocol will be enforced prior to allowing any further gunfight skits," the U.S. Marshal's Office said in a statement.

Authorities did not indicate whether any charges would be filed in the shootings.

The Tombstone Vigilantes were founded in 1946 to preserve the town's history.

The group performs staged gunfights and mock hangings of unsuspecting victims, according to the nonprofit group's website.

The once-bustling mining town near the U.S.-Mexico border is perhaps most famous for the 1881 "Gunfight at the O.K. Corral," which has been depicted in numerous films, between outlaw cowboys and lawmen including Wyatt Earp and Doc Holliday.

Three tourists were injured in a similar shooting in June 2011 during a staged gunfight in the Old West town of Hill City, South Dakota, and a Florida man also said he was struck by debris fired by a weapon during a previous re-enactment in 2001.

Watch this scene depicting the gunfight from "Tombstone" posted online: