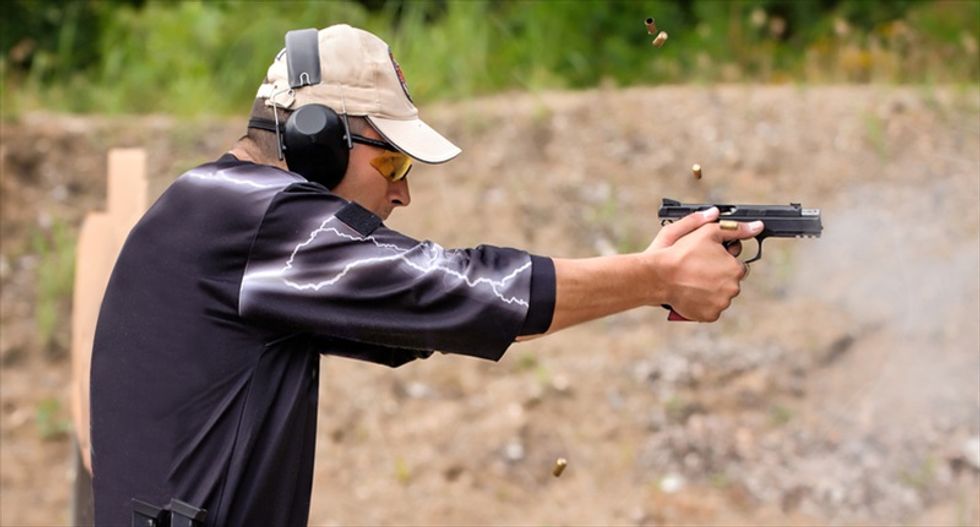 The gunman slain by police after he killed his English professor and eight others at an Oregon college was once turned away from a firearms academy by an instructor who recalled finding him "weird" and "a little bit too anxious" for high-level weapons training.

Christopher Harper-Mercer, 26, who moved to Oregon from the Los Angeles suburb of Torrance, California, was officially identified on Friday as the assailant in the rampage at Umpqua Community College in Roseburg, which ranks as the deadliest among dozens of U.S. mass shootings in the past two years.

According to accounts of survivors, the gunman stormed into the classroom of his introductory writing class to shoot the professor at point-blank range, then began picking off other victims one at a time as he questioned each about their religion and whether they were Christians.

Harper-Mercer had a monthlong stint in the Army in 2008 and a preoccupation with weaponry that dated back at least two years.

He sought to register for training in 2012 or 2013 at Seven 4 Para, a private self-defense and law enforcement training academy in Torrance, but Eloy Way, president and head instructor for the center, said he sent Harper-Mercer away.

"We wanted him to take a beginner safety course and he was trying to tell me that he already had experience with firearms and I didn't get a good feeling about him, so I turned him down," Way told Reuters.

"He was just kind of a weird guy and seemed kind of spoiled, immature," Way said. "He was a little bit too anxious to get high-level training and there was no reason for it."

Authorities have disclosed little of what they may know about the gunman's motives.

The shooter left behind a "multipage, hated-filled" statement in the classroom, according to a Twitter message from an NBC reporter, citing multiple law enforcement sources who were not identified. CNN, citing sources, said the statement showed animosity toward blacks.

Douglas County Sheriff John Hanlin, who has vowed never to say the gunman's name, declined to comment when asked about the writings at a news conference.

Harper-Mercer was born in the United Kingdom and arrived in the United States as a boy, his stepsister Carmen Nesnick told CBS Los Angeles.

Harper-Mercer, who identified himself as "mixed race" on a social networking site, enlisted in the U.S. Army and served for about a month in 2008 before being discharged for failing to meet administrative standards, military records showed.

At some point, Harper-Mercer appeared to have been sympathetic to the Irish Republican Army, a militant group that waged a violent campaign to drive the British from Northern Ireland. On an undated Myspace page, he posted photos of masked IRA gunmen carrying assault rifles.

Nine more people were wounded, three critically, before Harper-Mercer was killed in an exchange of gunfire with two police officers.

One of those wounded, Chris Mintz, 30, a U.S. Army veteran who served in Iraq, was credited with likely saving lives when he confronted the gunman outside another classroom before police arrived. Mintz drew fire that left him with seven bullet wounds and two broken legs, according to his former girlfriend.

So far this year, 294 U.S. mass shootings have been reported nationwide, according to the Mass Shooting Tracker website, a crowd-sourced database kept by anti-gun activists that logs events in which four or more people are shot.

The Roseburg shooting ranks as the deadliest bout of gun violence since September 2013, when a former U.S. Navy reservist working as a government contractor killed 12 people before he was slain by police at the Washington, D.C., Navy Yard. About 80 shootings have occurred across the country since then that claimed at least four lives each.

The Oregon shooting has led to fresh demands for stricter gun control in the United States, including an impassioned plea by President Barack Obama for political action, and statements by some Republican presidential candidates supporting the right of Americans to bear arms under the 2nd Amendment to the U.S. Constitution.

How many times can you get reinfected with COVID? Here's what experts say

For many of those who have tested positive for COVID-19 this summer, this isn't their first rodeo.