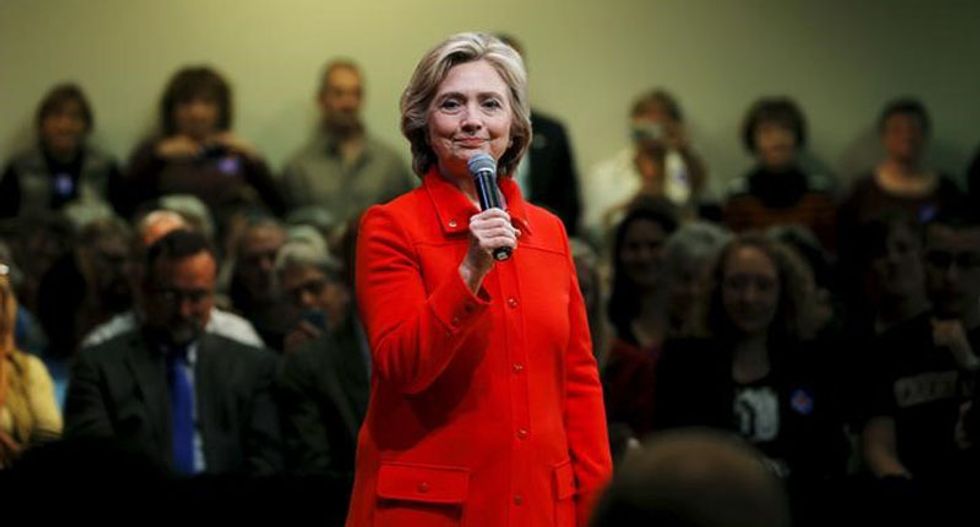 Clinton's requests to the Food and Drug Administration and the Federal Trade Commission were prompted by what she called the "egregious actions of Turing Pharmaceuticals," according to letters reviewed by Reuters.

The company drew fire from Clinton last month after news reports that it had raised the price of Daraprim, a 62-year-old treatment for a dangerous parasitic infection, to $750 a tablet from $13.50 after acquiring it.

Clinton's criticism sent drug industry stock prices tumbling. Turing Chief Executive Officer Martin Shkreli promised to lower Daraprim's cost to an unspecified price, and Turing is in the midst of a rebranding effort after being mocked on "Saturday Night Live."

In her letter to the FDA, Clinton said that Turing has still not "meaningfully lowered the price" and its decision to "artificially increase the price" exploited vulnerable patients dependent on the drug, which is often used by those with compromised immune systems.

"The FDA should expedite any pending reviews, and encourage applications for review, of other generic alternatives to Daraprim," Clinton wrote.

In her letter to the FTC, Clinton acknowledged the commission has only "limited authority to address price gouging when it is the result of unilateral action in a market with no competition," but urges it to examine both the industry overall and Turing specifically.

"I believe it would be a great service to the Congress and the Administration if the FTC would study and make recommendations on whether and how our laws might be amended to address this problem," Clinton wrote, offering an indication of how she might attempt to overhaul pharmaceutical practices if elected president in November 2016.

Clinton also asked the FTC to investigate whether Turing's decision to increase Daraprim's cost amounts to the type of anticompetitive behavior the agency can regulate.

Drug prices are also being scrutinized by Democrats in Congress and U.S. prosecutors. Most pharmaceutical companies regularly raise prices, saying it reflects the drugs' value in the market.

The Daraprim price increase was unusual because it was so large. Shkreli defended the steep hike in interviews, saying the company would assist needy patients, that the new price was still below comparable medicines and that the profits from Daraprim's sale would be channeled into developing new drugs.

Clinton last month unveiled a plan for a $250 monthly cap on out-of-pocket prescription drug costs and other measures to stop what she calls "price gouging" by pharmaceutical companies.

Turing's Daraprim and Shkreli were featured in a television advertisement run by Clinton's campaign about how she plans to take on "skyrocketing out-of-pocket costs."

"Nobody in America should have to choose between buying the medicine they need and paying their rent," Clinton says in the ad.

Authoritarian dictator Viktor Orbán, the prime minister of Hungary, was invited to speak to CPAC, the Conservative Political Action Conference. On Thursday he delivered an anti-LGBTQ attack on same-sex marriage and same-sex families, echoing the false "groomer" claims increasingly prevalent on the right by demanding same-sex couples must "leave our kids alone."

"Hungary shall protect the institution of marriage as a union of one man and one woman," he decreed, to cheers.

President Joe Biden will not fire the Department of Security inspector general accused of a "cover-up of treason" for the deletion of Jan. 6 text messages that were critical evidence for those investigating Donald Trump's unsuccessful coup attempt, according to White House press secretary Karine Jean-Pierre.

DHS Inspector General Joseph Cuffari, who was appointed by then-President Donald Trump in 2019, reportedly knew about the missing messages in May of 2021, but Congress was not notified until 14 months later, despite the notification being required by law.

On Thursday, ABC News reported that the Department of Homeland Security is temporarily suspending a records retention policy that has drawn anger from House investigators trying to probe the January 6 attack on the U.S. Capitol.

"The policy comes in the wake of a retention policy that caused the U.S. Secret Service to wipe text messages from Jan. 6 and surrounding days, losing all text messages from the days and drawing ire from the House Jan. 6 committee," reported Luke Barr. "'Earlier this month, Secretary Mayorkas directed the Office of the Chief Information Officer and the Office of the General Counsel to create and lead a Department-wide working group to conduct a 30-day review of the policies and practices for electronic message retention currently in effect throughout DHS and to recommend any necessary improvements,' the memo written by General Counsel Jonathan Meyer said."