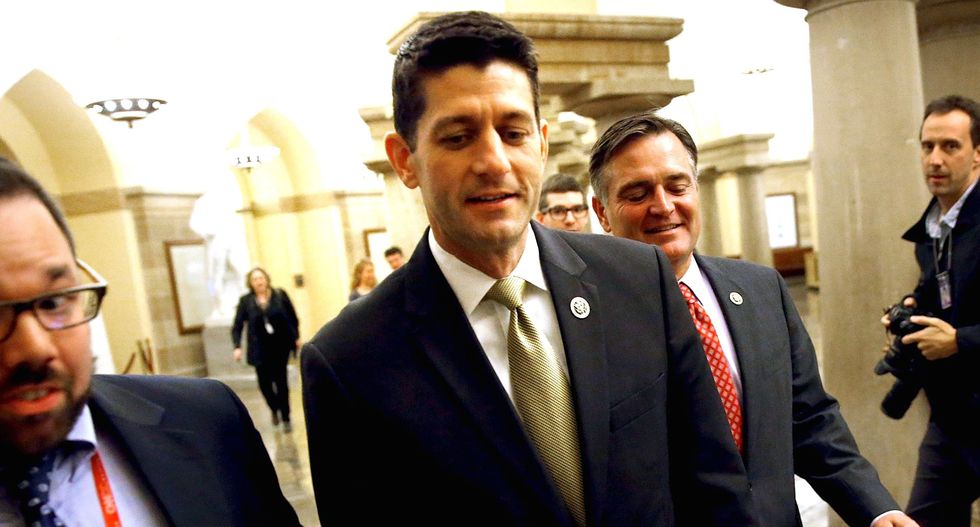 Hard-line conservative Republicans in the U.S. House of Representatives on Wednesday were not rallying behind Paul Ryan's bid to be the next speaker, as party turmoil again overshadowed debt and budget issues that could rattle markets.

Ryan, who ran for vice president in 2012, on Tuesday said he would seek the top House job, which the majority Republicans have struggled to fill, but only under certain conditions, including endorsements by Friday of various Republican factions.

So far, no such support was evident, though the right-wing Freedom Caucus of about 40 of the House's 247 Republican members planned to huddle with Ryan on Wednesday.

If this conservative faction were to withhold its support, it could deny Ryan the backing he needs in the full House to be elected speaker in a vote set for Oct. 29.

The leadership struggle has dragged on since House Speaker John Boehner's stunning retirement announcement in late September, even as a Nov. 3 deadline approached for Congress to act on the federal debt limit and a Dec. 11 deadline drew near for enacting new funding to keep federal agencies operating.

Underscoring those worries, U.S. Treasury Secretary Jack Lew said he feared a fiscal policy "accident" if the brinkmanship continued as the country edges closer to a possible default.

Brooks also said Ryan's desire to spend weekends with his family in Wisconsin rather than raising money for his party underscored that he would not be able to do the speaker's job "as it is normally done."

For now, the House Republican leadership has not settled on when it would vote to raise the debt limit or what would be in such a bill.

The only debt-related measure set for House floor action for now is one to be voted on Wednesday requiring the Treasury to continue to borrow to pay the principal and interest on certain obligations if the debt exceeds the statutory limit.

Democrats have blasted this legislation as ensuring Chinese bondholders get paid while many other government activities halt, such as payments for U.S. troops and veterans.

As Boehner announced his support of Ryan, some Freedom Caucus members said they still backed their own contender, Representative Daniel Webster of Florida, although they were willing to listen to what Ryan has to offer.

Idaho Republican Representative Raul Labrador, a caucus member, told reporters Ryan "could be a good speaker" but added: "My only concern right now is it appears he is asking for more power to be in office instead of less power," referring to Ryan's demand that House rules be changed so that individual members could no longer force floor votes to oust the speaker.

Conservative Republican Representative Thomas Massie told reporters Ryan's conditions for running "crossed into the unreasonable category" and were designed to give him a way out.

"I mean, to say that he’s not going to travel on weekends? He’s going to take the most important job here, but he wants to telecommute? I don’t think that’s going to work,” Massie told Reuters.