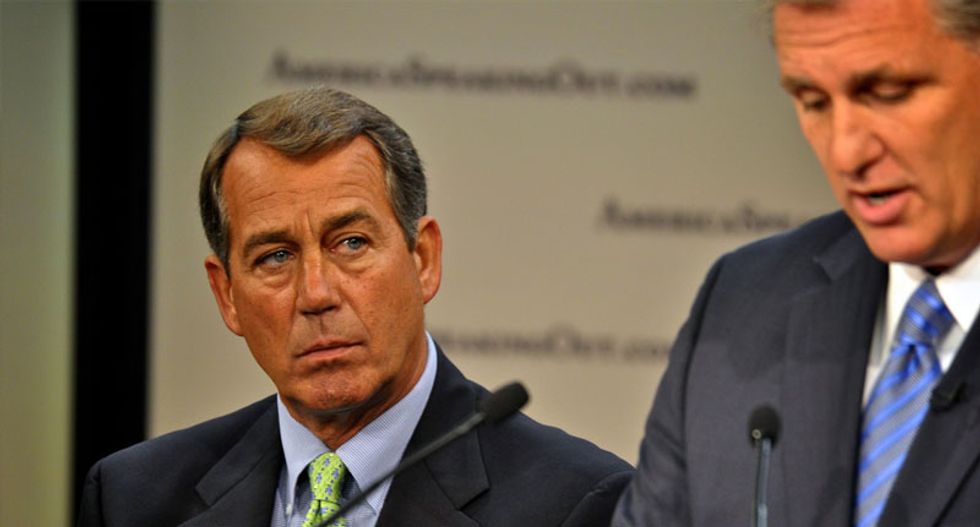 Republicans in Congress were plunged into turmoil on Thursday when California Representative Kevin McCarthy, the favorite to succeed retiring House Speaker John Boehner, dropped out of the race in a surprise that adds to concerns about the party's ability to govern effectively.

McCarthy, the No. 2 Republican in the House, faced opposition from more conservative lawmakers who now could be emboldened to take a more confrontational approach toward Democratic President Barack Obama on legislation and policy.

McCarthy's decision leaves House Republicans without a leader at a time when they face difficult decisions about the spending and national debt that could threaten the country's ability to pay its bills and keep its government running.

Even under the leadership of Boehner, who relied on McCarthy as an ally, Republicans stumbled into a 16-day government shutdown in 2013 and brought the country to the brink of default in 2011, leading to the United States' first-ever debt rating downgrade.

The next speaker will have to answer to a newly assertive conservative wing at a time when the party is trying to appeal to a broad swath of voters in the campaign for the November 2016 presidential elections.

In several closed-door meetings this week, McCarthy told lawmakers he would not be like Boehner, some lawmakers said afterward, but few seem to have found this convincing.

Both the secret-ballot vote to nominate a Republican candidate for speaker and the full House vote, which was set for Oct. 30, have been postponed until further notice.

House Republicans' inability to merely pick a leader comes after Boehner and Senate Majority Leader Mitch McConnell, also a Republican, had gone to great lengths all year to demonstrate that their party can effectively run Congress.

"If we are going to unite and be strong, we need a new face to help do that," McCarthy told reporters. He said he would stay on in his current post as majority leader.

McCarthy’s ability to effectively communicate Republican initiatives was called into question last week when he made a connection between a special House committee investigating a 2012 attack in Benghazi, Libya, and Democratic presidential candidate Hillary Clinton’s falling public opinion poll numbers.

Clinton was secretary of state at the time of the attack, in which four Americans, including the ambassador to Libya, were killed.

One possible successor to Boehner, Wisconsin Representative Paul Ryan, said he was not interested in becoming speaker. The party's 2012 vice presidential nominee is widely admired among Republicans but said he wanted to remain as chairman of the tax-writing Ways and Means Committee.

The two lawmakers who had challenged McCarthy for the post, Representatives Jason Chaffetz of Utah and Daniel Webster of Florida, said they were still in the race.

"It was just absolutely stunning what happened," Chaffetz said. "I don't know if I am the right person. I put my name in the hat because I do want to unite this party internally." Webster said he expected other candidates to enter the contest.

The Republicans were tossed into upheaval just a few weeks before the United States is due to reach the limits of its borrowing authority. The Treasury department has estimated that the United States will hit its $18 trillion debt cap around Nov. 5, and the White House urged Congress to raise the limit before then to avoid a possible default.

Lawmakers are also struggling with Obama on spending levels before government funding runs out on Dec. 11.

White House spokesman Josh Earnest said there had been several instances in the past few years in which a Republican-dominated House of Representatives has managed to raise the debt ceiling without political brinkmanship.

"And we're hopeful that in spite of this chaos, that Republicans and Democrats in the House will do the same thing again," Earnest said at a news briefing.

McCarthy was elected to Congress from California in 2006 and had been one of Boehner's lieutenants in House Republican leadership since 2011. He has been majority leader since August 2014.

Webster had drawn the backing of the House Freedom Caucus, a bloc of about 40 conservatives. These Tea Party-aligned members noted that Webster, 66, led efforts that "empowered" individual lawmakers while he was speaker of the Florida House from 1996 to 1998.