How opponents of increasing the minimum wage pit worker against worker 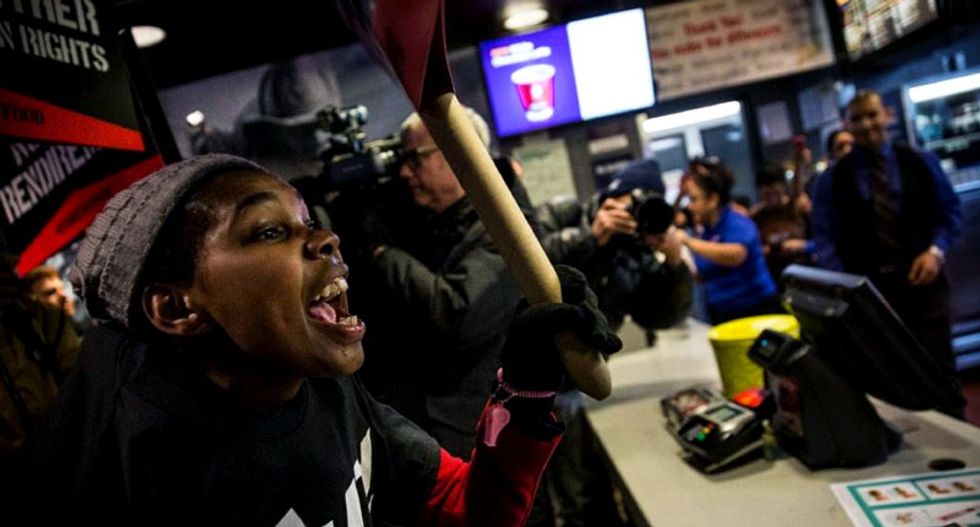 Protesters march through a McDonald's demanding a raise in the minimum wage to $15 per hour on December 4, 2014 in New York (AFP Photo/Andrew Burton)

When Jens Rushing overheard his co-workers complaining about New York’s “burger flippers” demanding $15 an hour, the Texas-based paramedic tapped out a Facebook post on his cellphone. He never imagined that the post would go viral, but since he made his comments in July, it has been shared approximately 50,000 times and picked up on other platforms, like Tumblr and Imgur.

In a few hundred words, Rushing got to the heart of the problem regarding the fight to increase the US minimum wage. The demand by the lowest-paid workers in the US that they be paid $15 an hour for their work – a fight backed by the union-led Fight for $15 movement – has triggered a new class war. Except this time, instead of cowering behind their golden gates, the rich – the owners, the CEOs, the investors – are standing on the sideline leaving the “working class” to fight among themselves.

There’s a lot of talk going around my workplace along the lines of, ‘These guys with no education and no skills think they deserve as much as us? Fuck those guys.’ And elsewhere on FB: ‘I’m a licensed electrician, I make $13 [an hour], fuck these burger flippers.’

And that’s exactly what the bosses want! They want us fighting over who has the bigger pile of crumbs so we don’t realize they made off with almost the whole damn cake. Why are you angry about fast food workers making two bucks more an hour when your CEO makes four hundred times what you do? It’s in the bosses’ interests to keep your anger directed downward, at the poor people who are just trying to get by, like you, rather than at the rich assholes who consume almost everything we produce and give next to nothing for it.

Rushing’s co-workers are not the only ones who believe fast-food workers and other service workers do not deserve a raise. Just wade into the comment section on any Fight for $15 story and you will find comments calling on such workers to go back to school or to improve their skills.

Organizations and lawmakers opposed to raising the federal and the state minimum wage have used this dynamic to pit workers against workers – allowing CEOs and those running companies to sit on the sidelines.

The lowest-paid workers have tried to shift the conversation with little success. Last year, Walmart workers protested outside Walmart heiress Alice Walton’s apartment. In August, the US Securities and Exchange Commission ruled that publicly traded companies must disclose the pay ratios of their CEOs and the median pay of their workforce. While that rule does not kick in until 2017, it has been widely reported that on average US CEOs make 300 times what their workers do. Yet even now, one of the most frequently asked questions regarding the $15 minimum wage is: do service workers deserve it?

Most recently, a Times Square billboard purchased by the Employment Policies Institute featured a young man with the accompanying text: “What? I get $30,000 a year with no experience or skill? Who needs an education or hard work when governor [Andrew] Cuomo is raising the minimum wage to 15 dollars an hour?” The billboard implied that most fast-food workers are uneducated and lazy , when the truth is that many of these workers work more than one job in order to make ends meet.

White-collar workers and blue-collar workers want to distinguish themselves from service workers, said Damon Silvers, a lawyer and an associate general counsel for the AFL-CIO – the largest federation of labor unions in the US. AFL-CIO has also been one of the key players in the Fight for $15 movement.

Related: Who would oppose a $15 minimum wage? Sometimes your neighbour

A week ago, while trying to suggest that his party has to do a better job of attracting black voters, Jeb Bush, former governor of Florida and Republican candidate for president, suggested that those voters often vote for the Democrats who lure them with “ free stuff ”.

“Republicans get maybe 4% to 7% of the African American vote for president. Those are the kind of the numbers I hear about,” said Bush, adding that Republicans should attempt to double those numbers. “Our message is one of hope and aspiration. It isn’t one of division and ‘Get in line and we’ll take care of you with free stuff’.”

Rushing said that he has had brushes with poverty but never struggled with it himself – mostly due to the safety net of his family, his education, job and savings.

The tactic of pitting workers against workers has also been used to undermine unions, said Conrado Guerrero, a vice-president of SEIU Local 99 in Los Angeles, California. Guerrero works as a building engineer in the Los Angeles unified school district where he oversees heating and cooling systems.

“That’s one of the tactics they like to use. We try to [approach] it in a different way,” he said. The $15 minimum wage should be a starting point and raising the minimum wage to that could be used to drive up other wages. “[We] say: ‘You know what, $15 is not good enough. That’s still poverty levels. Just imagine how much they were making before that. If you are getting $15 that means you can start moving up above.’ So, this is just better for everybody.”

For union leaders and workers’ advocates, raising the minimum wage is a no-brainer. It would help millions of Americans make ends meet, maybe get them off public assistance programs like food stamps and housing assistance – the “free stuff” references by Bush. Additionally, many believe that raising wages of the lowest Americans will help raise wages for the rest of the nation.

Silvers points out that wages have stagnated or fallen for 90% of workers. “There has a been an erosion of wages among America’s middle class. It’s a near universal phenomenon,” he said.

“Higher minimum wage is not a complete solution to wage stagnation, but it sure as hell helps. Those advocating for a higher minimum wage usually understand we need higher wages across the economy. The stagnation has been universal and that’s what the rightwingers won’t admit.”

The US needs a federal minimum wage hike, Rushing told the Guardian.

“Obama’s $10.10 an hour is a joke. That’s about $20,000 a year. You can’t raise a family on that,” said Rushing. And as if familiar with what goes on in comment sections on stories like this one, he added: “Let me pre-empt those who respond with ‘These jobs aren’t meant to support families!’ by saying that it doesn’t matter what they were meant to do. The fact is that many of them do support families.”

About 28% of the workers who would benefit from a higher minimum wage have children, according to Economic Policy Institute , a left-leaning thinktank. About 55% of them work full-time and 44% have some college experience. The average age of affected workers is 35, with 35.5% of them being at least 40 years old.

“The idea that these are temporary positions, meant for entry-level workers who inevitably climb the ladder to wealth, is a fiction in modern America, where upward mobility is dead,” Rushing said. “If a job takes up someone’s life, that job deserves a living wage. End of story.”