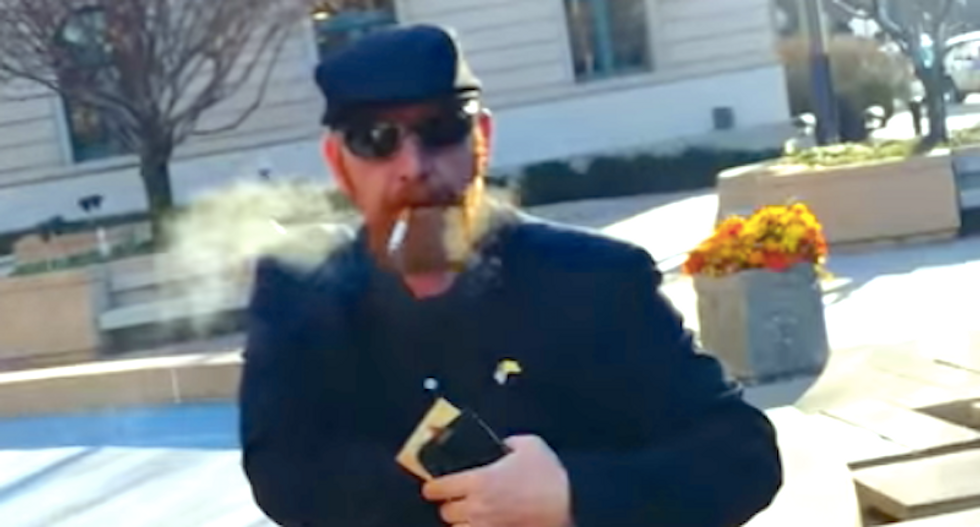 A Washington state man was convicted Monday of failure to comply with police orders during an armed protest earlier this year outside a federal courthouse.

Anthony Bosworth, a member of the III Percent militia group and an unsuccessful candidate for Yakima County sheriff, carried an AK-47 and 9mm handgun Feb. 25 onto the grounds of a federal courthouse in Spokane to protest gun restrictions, reported The Spokesman-Review.

His wife recorded video as police questioned Bosworth, who refers to himself as "The Patriot" on his Facebook page, and asked him to leave.

Bosworth was arrested after he refused police orders to leave federal property and take up his armed protest several feet away on a city-owned sidewalk.

Federal prosecutors said Bosworth's interpretation of the law or his intentions to leave were unimportant to the case because he never did follow police orders to leave the plaza.

About a dozen supporters gathered outside the courthouse Monday for an armed protest.

“We will not fire the first shot, we will not target innocents," wrote Kit Lange, a writer for the Patrick Henry Society and head of statewide "Liberty For All 3 Percenter" group, earlier this year. "But we will not allow the constant erosion of our rights. We will not start this violent phase of this Civil War. But by God, if they bring it, we sure will finish it.”

However, Lange withdrew her support in September, after Bosworth made apparent threats against Spokane County Sheriff Ozzie Knezovich and a plainclothes police officer.

The sheriff had been asked to testify for the defense but was not called.

“There was a discussion on if the law extended to the courtyard,” Knezovich said. “My comment was, if there’s any doubt, it would probably be a good thing to just drop it and move on.”

Rosanna M. Peterson, chief judge for the Eastern District of Washington, signed an order shortly after Bosworth’s arrest extending the gun-free zone to the courthouse plaza, but that order was rescinded in April.

"This is their quote is that they do not know if they can legally, if they were legal in arresting me, detaining me, or seizing my weapons," Bosworth said in March. "Since they're in a grey area, they're going to hold onto those weapons in case they can find federal charges against me."

Stevens, the defense attorney, told The Spokesman-Review that federal prosecutors offered to settle the case for a $50 ticket, but Bosworth elected to stand trial instead.

Bosworth, whose guns remain in federal custody, faces 30 days in jail when he is sentenced Nov. 10.

Stevens said his client may appeal the misdemeanor conviction.