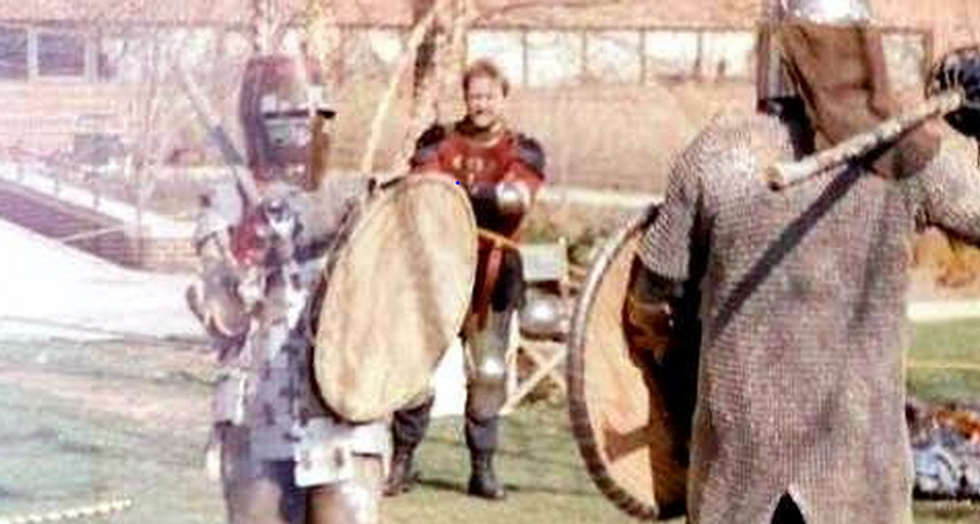 In what may be every cosplayer's dream, an Indiana woman fought off a home intruder using Medieval combat skills.

Karen Dolley, 43, was sleeping in her bed when she heard the sound of a man's voice in her house in the middle of the night, the Indiana Star reports. She flipped the lights on a discovered there was a strange man standing in her living room.

But Dolley didn't cower. Instead, instincts from years of training and conditioning in Medieval combat skills kicked in. She punched the man 10 times and cornered him.

“I didn’t think I was getting good blows in but my knuckles are bruised today,” Dolley told the Star. “Hitting someone like that, it isn’t like the movies. You’re expecting it to be louder and see people jerk around, but that’s not how it happens in real life.”

Dolley owns a gun, but when she went to grab it, she opened the wrong drawer in the chaos of the moment. So she reached for her ninjato -- which is a sword used in the Japanese feudal period.

She held the man at sword point until police arrived minutes later.

She began training in combat when she was 18 as a fighter for the group Society for Creative Anachronism, the Star reports. The group is dedicated to recreating arts and skills of pre-17th Century Europe. There, she wore armor and would fight men far bigger than her size-wise using rattan swords.

She told the Star that early on, her opponents were able to guess what her moves would be because she was too tentative, for fear of hurting them.

Clearly, that's not the case anymore.

"I definitely don’t need to work on my aggression, I guess,” she told the Star.

While Dolley, who is also a roller derby girl, has years of training, an expert in self-defense said untrained people should avoid fighting intruders if they can.

It's best to run, but if you can't, using a knife or stick is acceptable for someone with training in their use. Otherwise, using common objects around the house, like a lamp, is a last resort, Michael Valenti, who teaches self defense, told the Star.

Dolley is mostly annoyed that the intruder, who apologized to her as he was being led away by police, ruined her sleep and upset her pet cat.

“I’m really, really glad I didn’t have to do anything more,” she told the Star. “I know I could do it, but I don’t want to do that.”

Donald Trump is desperately trying to stop, or at the very least stall, the subpoenas from the Jan. 6 House Select Committee, but a CNN report explained that there are few legal options available to the former president. The current plan appears to be to bury any House request with years of lawsuits, said CNN.

Monday, Trump filed a lawsuit to stop the National Archives from handing over any communications from his White House staff relating to Jan. 6, organization and planning around the event and any efforts to promote rage among his supporters around a "stolen election."