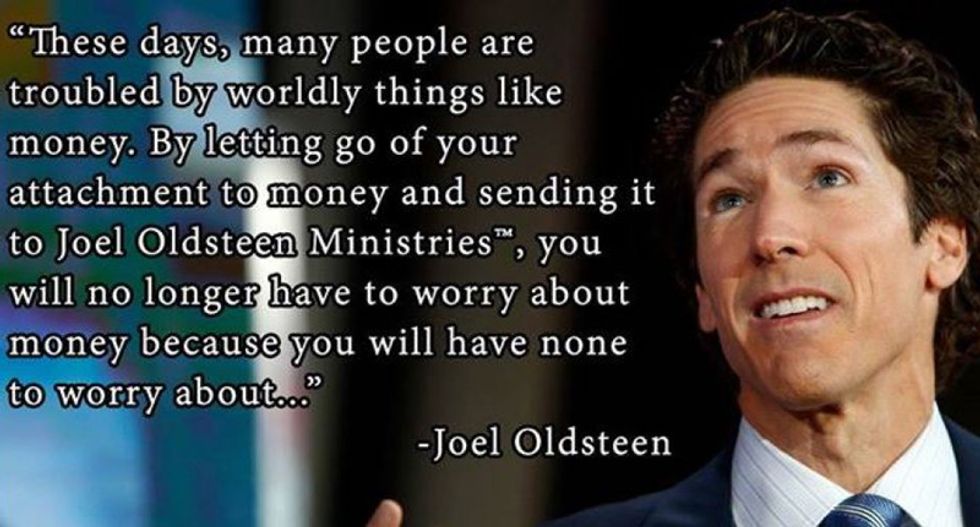 A Facebook prankster who maintained a parody page mocking evangelist Joel Osteen had some fun with followers of the mega-church head by impersonating Osteen on his own Facebook account and bragging about his wealth and how he fleeces true believers.

According to the Houston Chronicle, Ben Palmer -- whose Joel Oldsteen Ministries Facebook account was taken down following his hijinks -- showed up in Osteen's comments and engaged followers who thought they were hearing from the evangelist himself.

Palmer's trolling of Facebook commenters is reminiscent of Mike Melgaard who recently posed as the Target Help Desk and tweaked conservatives who were enraged when the retail chain stopped separating toys by gender.

Using an Osteen avatar and despite using the "Oldsteen" variation in the name, Palmer answered questions and hawked Osteen merchandise while continually pointing out how rich he was.

The responses by Palmer have since been deleted, but the Chronicle captured enough of them to show how Palmer parodied the evangelist who is as known for his self-merchandising as he is for talking about Jesus.

In one exchange "Oldsteen" tagged onto a real Osteen post discussing "serving an eviction notice" to negative thoughts.  Oldsteen added that he used the eviction analogy since most of his followers have been evicted from their homes at one time or another. He then stated: "Some of the items I have in my house are more expensive than your house. I have a tooth brush holder that could pay a year of your rent. How does that make you feel? Are you jealous?"

Facing criticism from "Linda" over not giving back to the poor, Oldsteen said the poor  would "be fine" if they bought his book "The Power of 'I Am,'" after which he said they could complete the title with "Out 16 dollars."

A sampling of Oldsteen Facebook posts below courtesy of the Chronicle: 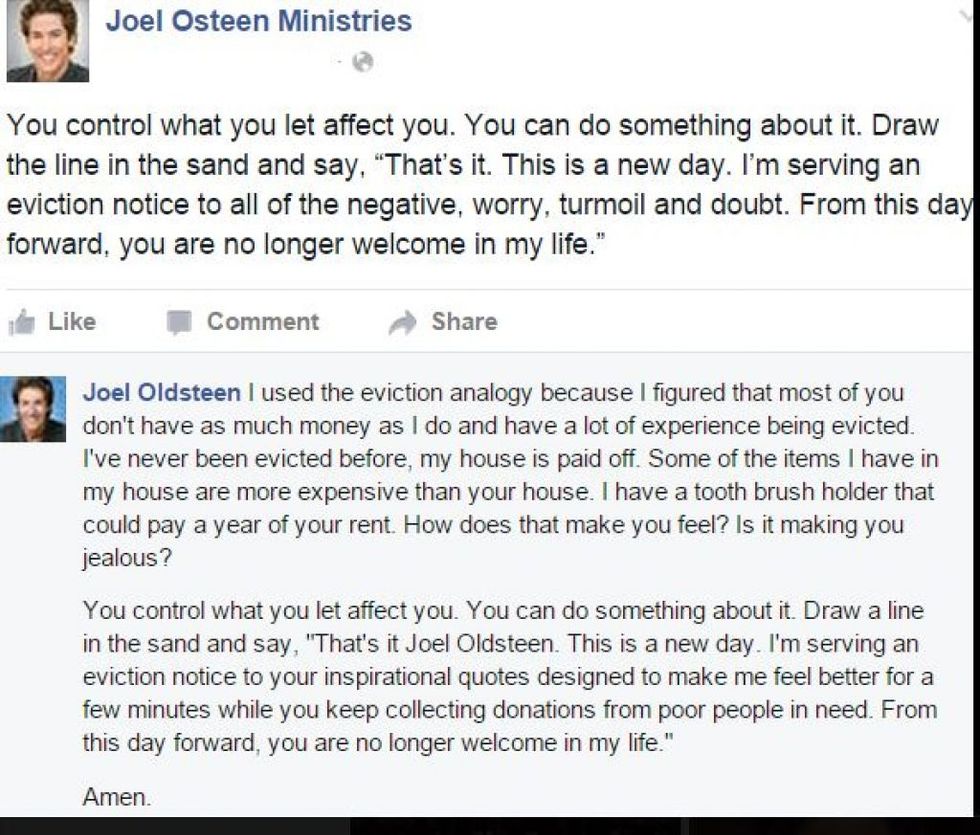 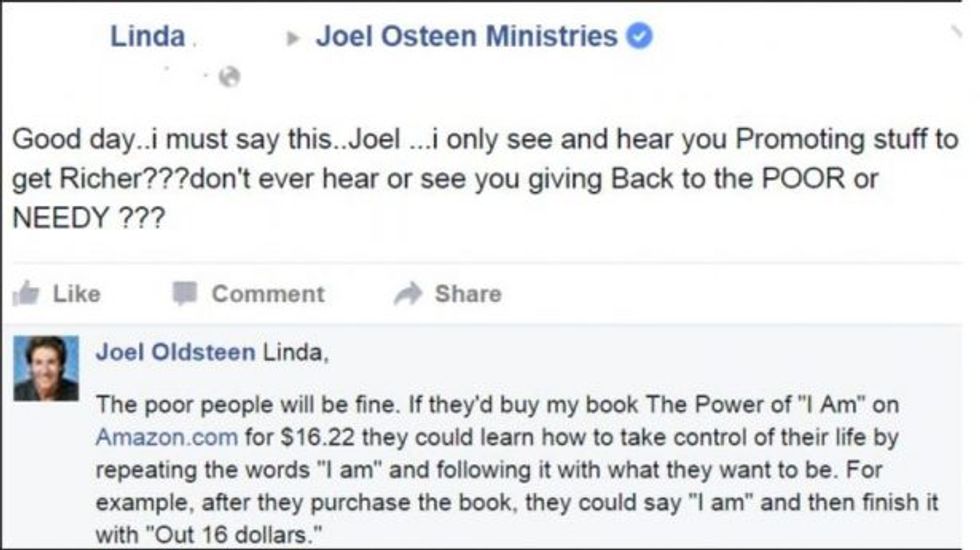 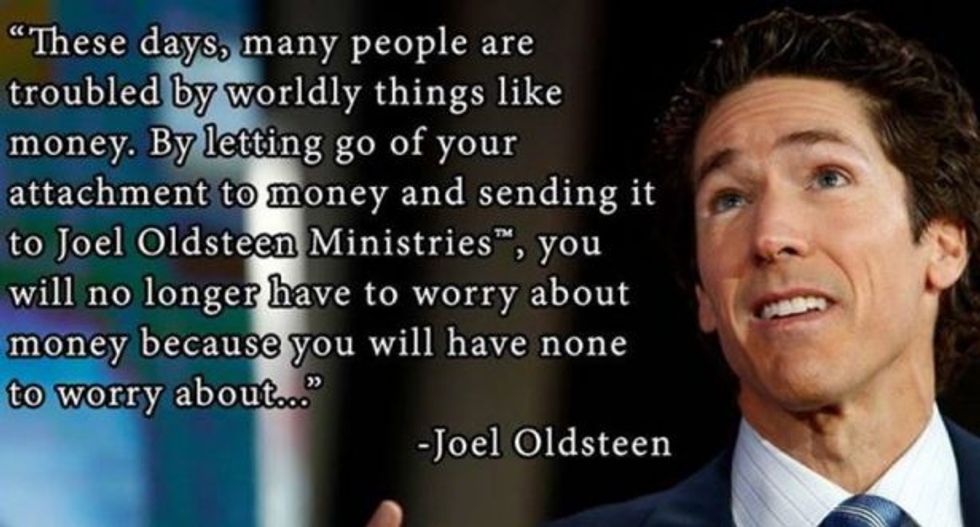 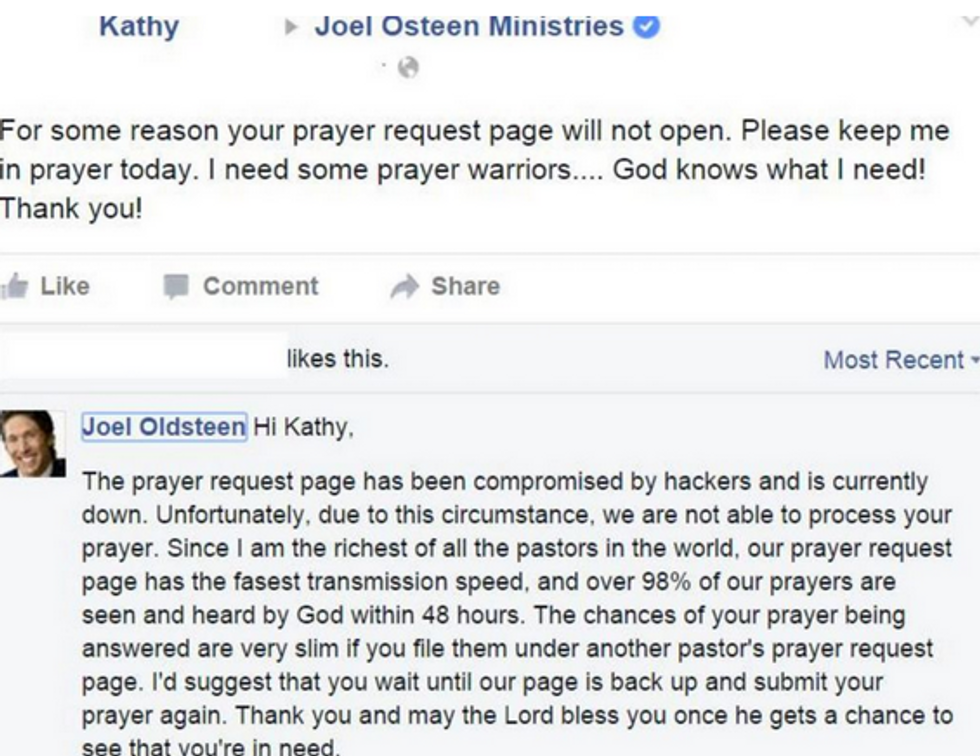 Indictments are coming: At long last, criminal justice will catch up with Donald Trump

Putting a former president on trial for alleged criminal behavior would be the first prosecution of its kind in American history. It would also do much toward restoring the myth that no person or corporation is above the law. As James Doyle has explained, putting Trump on trial "redeems American justice."

Looking both backward and forward, I would argue that putting the former racketeer in chief and his accomplices on trial for seditious conspiracy to overthrow the U.S. government — arguably the ultimate constitutional crime — is more tangible than the abstract goal of redeeming American justice. In this insurrectionary moment, "substantive" due process justice trumps "procedural" due process justice.