Islamic State militants blow up Arch of Triumph in Palmyra 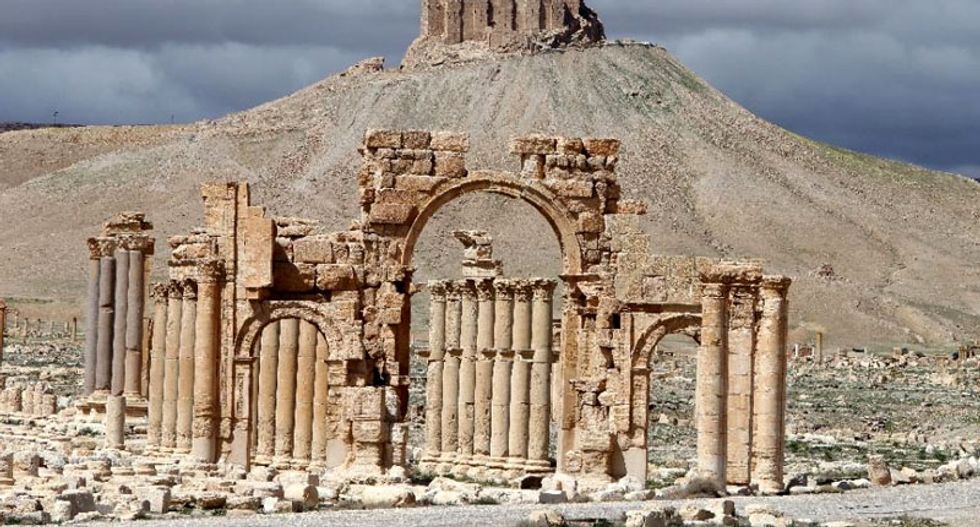 Islamic State extremists have blown up the famous Arch of Triumph, shown here in 2014, in the ancient Syrian city of Palmyra, the country's head of antiquities says (AFP Photo/Joseph Eid)

Islamic State group jihadists have blown up the Arch of Triumph in Syria's Palmyra, the country's antiquities chief said Monday, stepping up their campaign of destruction at the world heritage site.

The move was seen as the latest salvo in IS's propaganda war, and came just days after Russia launched air strikes against the extremists and other opponents of Syrian President Bashar al-Assad.

The West has accused Moscow of mainly targeting moderate opponents of the regime while neighbouring Turkey has branded the Russian bombing campaign "unacceptable".

Ankara said Monday that its F-16 jets had intercepted a Russian fighter plane that violated its air space near the Syrian border, forcing it to turn back.

The NATO member summoned the Russian ambassador and "strongly protested" the violation which took place on Saturday, its foreign ministry said.

Russia and Turkey have long been at odds over the crisis in Syria, with Moscow emerging as Assad's key international backer and Ankara urging his ouster as the only solution to the conflict.

Russian warplanes have been flying over Syrian territory since Wednesday, conducting air strikes on what Moscow says are IS group targets in the country's northern and central provinces.

The extremist group has seized large parts of Syria and neighbouring Iraq, committing atrocities including beheadings, rape and mass killings, and destroying archaeological and cultural heritage.

Syrian antiquities director Maamun Abdulkarim warned Monday of a catastrophe unfolding in Palmyra, which the jihadists have been dismantling since capturing it in May.

"This is a systematic destruction of the city. They want to raze it completely," Abdulkarim told AFP.

"Every time IS was attacked, they acted like this."

He said IS had booby-trapped the Arch of Triumph, situated at the entrance to the ancient city's historic colonnaded street, several weeks ago and blown it up on Sunday.

The jihadist group had already destroyed several famed tower tombs, the 2,000-year old Temple of Bel, and the Lion of Athena.

Known as the "Pearl of the Desert", the ancient oasis town of Palmyra situated about 210 kilometres (130 miles) northeast of Damascus became famous as a stopping point for caravans travelling on the Silk Road.

Under IS's extreme interpretation of Islamic law, these artefacts are considered idolatrous, and must be destroyed.

The jihadist group has also used the destruction of historic artefacts for propaganda, according to experts.

"It's a fairly low-risk, cheap way for IS to really maximise its international infamy," said Charlie Winter, analyst at the London-based Quilliam Foundation.

He said IS might have destroyed the celebrated arch as an attempt to recapture international attention after the Russian air strikes.

Experts say the militants have used the destruction to raise their profile to attract new recruits, and are also funding their "caliphate" by selling artifacts on the black market.

According to a political figure close to the regime, "the Russians want to retake Palmyra to show that they are protecting heritage in Syria."

But as the Syrian army fights to recapture Palmyra, there are fears that IS may speed up its razing of the ancient site.

For Winter, "the more the regime encroaches on Palmyra, the more likely it will be that it will be destroyed."

There was also a warning Monday from French Foreign Minister Laurent Fabius that the Syrian conflict could turn into a wider religious war.

"When you see a conflict which at first was a civil war, becoming a regional war involving international powers, Russia, Iran, the US, the risks are serious," he said.

Air strikes in Syria must target IS but also other groups considered "terrorists", Fabius added.

IS has taken advantage of the chaos in Syria caused by its four-year civil war, which has killed more than 240,000 people and sent millions fleeing, to expand its influence in the country.

A year-long US-led air campaign has failed to vanquish the jihadists, and Western governments fear that Russia's involvement could make things worse.