It's 2015 but US Christians are still blaming witches for mass shootings, tax fraud, and headaches 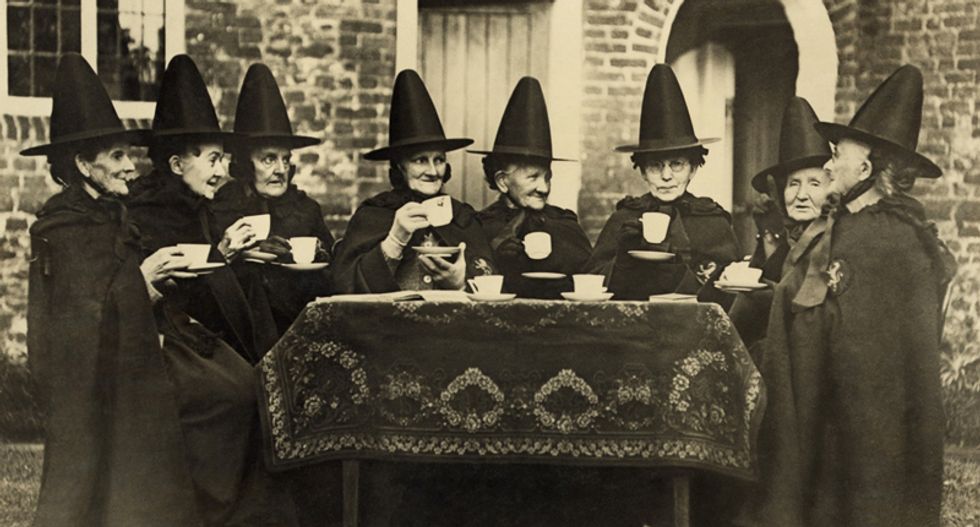 Eight women in high hats having tea. They are not a group of witches but the members of the Holy and Undivided Trinity of Castle Rising, Norfolk, England. Ca. 1920. -- via Shutterstock

With Halloween just around the corner -- now more associated with adults dressing as "sexy whatevers" instead of as a children's dress-up day -- some people are still going old school, warning about witches plying their trade among us.

According to the American Religious Identification Study, Wicca -- often associated with witchcraft -- is the fastest growing religion in the U.S. with those identifying as "pagans" close behind. That is in addition to the more than 200,000 "registered witches" claimed by evangelical scholars to be living in the U.S.

With so many people practicing a form of "natural magic" instead of turning water into wine, it's also natural that those who don't understand the non-traditional spiritual beliefs of others would blame their practices for society's ills.

According to Shane Idleman, a California pastor, the recent spate of mass shootings might possibly be blamed on Hollywood glamorizing the witchcraft and vampire lifestyles in movies and on TV.

"Much of the sex and violence today is tied to zombies, witches, vampires, and horror movies," Idleman wrote. "But there is no such thing as 'good magic or 'good witches' or 'nice vampires.' These things, by their very nature, are evil — evil is that which God defines as evil, it opposes the character and nature of God — there is nothing good about that. Scripture makes it clear that fascination with the powers of darkness and the occult have no place in the heart or the mind of a Christian."

Witchcraft has even invaded the Christian church, with a witness saying a desire to practice the "dark arts" resulted in the beating death of a 19-year-old man by his parents and parishioners in a New York church, although police have discounted that claim.

Not all law enforcement officials dismiss claims of witchcraft outright. According to the Center for Investigative Journalism, prosecutors have targeted practitioners of Santa Muerte, a rapidly growing Mexican folk religion that worships images of a shrouded skeleton.

According to the CIJ, they have recorded over "a dozen instances nationwide where law enforcement officials have used Santa Muerte practice as an indicator, targeting worshippers as criminals." Prosecutors are using items associated with the religion as evidence in criminal trials, including a high-profile case IRS tax fraud case where a practitioner was accused of placing a curse on a witness in order to frighten her.

Writing at the website Charisma, Christian writer Jennifer LeClaire claims that witchcraft is not only behind criminal acts, but is an everyday obstacle to living a happy life.

"Witchcraft releases strong confusion against our minds so that Jesus is not the clear focus of our lives," she wrote. "Once that happens, we are more vulnerable to the vain imaginations the enemy whispers to our souls. We have a responsibility to know about this spiritual wickedness and guard ourselves against it."

According to LeClaire, witchcraft is behind things most people would consider the daily grind of being alive.

She lists 8 "clear signs witchcraft is attacking you right now" (see here and here)  that include: confusion, inability to pay attention, a desire to be alone, "forgetting who you really are," depression, frustration, aches and pains, and exhaustion.

According to Le Claire, she has learned to combat everyday witchcraft, writing:  "Witchcraft doesn't hit me that way anymore. In fact, I've learned to take authority over it, cast down imaginations, be slow to speak and maintain my joy despite the exhaustion, low-grade headaches and burning eyes."