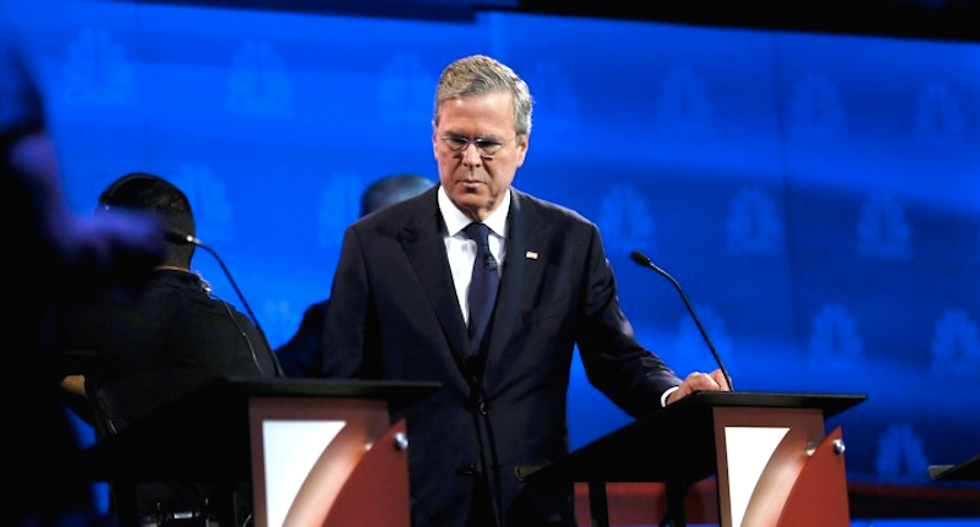 Jeb Bush needed a strong performance at the Republican presidential debate to silence the doubters. He did not get it.

Instead, his lackluster showing is likely to spur even more questions about his viability as a top-tier candidate, with his campaign manager immediately after the debate insisting that Bush would remain the race for the long haul.

The former Florida governor came into the debate after having dramatically downsized his campaign staff and huddling with nervous donors to calm their fears, the result of persistent single-digit showings in opinion polls.

Those donors are likely to be even more anxious following Wednesday night’s debate, after Bush seemed to come out on the losing end of exchanges with both U.S. Senator Marco Rubio and New Jersey Governor Chris Christie and disappeared from the screen for long stretches of time.

“You have all these donors invested in him,” said Craig Robinson, the former political director of the Iowa Republican Party, told Reuters after the debate. “At some point, they’re going to change horses.”

Said Ford O'Connell, a Republican strategist, “If he was looking to revive his campaign and replenish his coffers, tonight did not do him any justice.”

Bush hit fellow Floridian Rubio early with a jab at Rubio’s attendance record for votes on the Senate floor. But in what became one of the debate’s most-talked about moments, Rubio flipped the attack back at him, labeling Bush a craven opportunist.

The only reason Bush was making it an issue, Rubio said, was “because we’re running for the same position, and someone has convinced you that attacking me is going to help you.”

Startled, Bush had no response.

“This was their plan of attack on Rubio, and it was a spectacular failure,” Robinson said.

Added strategist O’Connell, “He went at Rubio with a knife, Rubio came back with a gun.”

Later in the event, Bush was asked whether fantasy football should be treated as gambling -- and he joked about his own fantasy team before suggesting the government should get more involved.

It was the rare moment when Bush was given a chance to show his sense of humor and one that otherwise might have gone over well. But he was interrupted by a fiery Christie, who exclaimed - to the approval of the audience -- “Are we really talking about getting government involved in fantasy football? We have -- wait a second, we have $19 trillion in debt. We have people out of work. We have ISIS and al Qaeda attacking us. And we're talking about fantasy football? Can we stop?”

Bush, whose diminished standing in the race was noted by the debate moderators, was not a factor for much of the night. Of the 10 candidates on the stage in Boulder, Colorado, for the main debate, the only one who spoke less often than Bush was another struggling contender, U.S. Senator Rand Paul of Kentucky.

“I think he acquitted himself well, but he didn’t dominate,” said John “Mac” Stipanovich, a Florida lobbyist and a longtime Bush ally. “The summer soldiers among Jeb’s supporters will not be comforted. Those made of sterner stuff will not be discouraged.”

Polls have consistently had Bush in the single digits, far behind the insurgent campaigns of billionaire developer and reality TV star Donald Trump and retired neurosurgeon Ben Carson. The latest Reuters/Ipsos five-day tracking poll had Trump in the lead with 32 percent, Carson behind at 15.5 percent and Bush at just 7 percent.

Still, Bush's campaign was unbowed, complaining after the debate that he got the short shrift among the time allotted.

“I think Jeb Bush did what he had to do tonight, which is talk about his record in front of millions of Americans,” his campaign manager, Danny Diaz, said after the debate, He maintained that Bush would stay in the race for the duration.

Diaz also suggested that the campaign would continue to make an issue out of Rubio, a first-term senator, and his lack of experience. Bush returns to New Hampshire on Thursday, a state his campaign now intends to make a priority.

But Robinson said Bush had handed Rubio an advantage at the debate.

“Rubio can grow so much if he can just get Jeb out of the way,” Robinson said. “He just might force his biggest rival out of the race.”