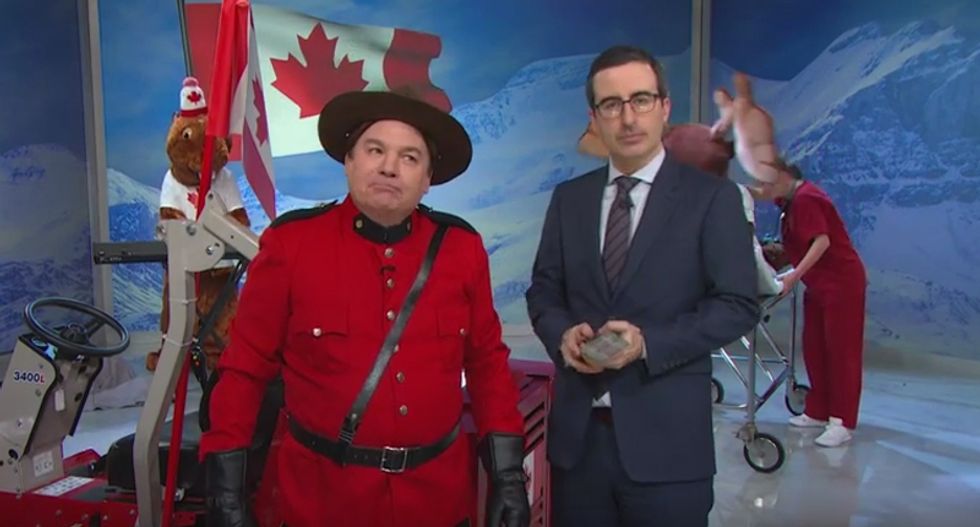 On Last Week Tonight, host John Oliver brought on a beaver playing "Sweet Caroline," a moose getting a colonoscopy, and comedian Mike Myers dressed as a Canadian Mountie to convince Canadian voters to break up with their "dickhead boyfriend" prime minster in Monday's election.

Calling Canada, "The country you think about so little -- that's it. End of sentence," Oliver brought to America's attention that our largest trading partner is having a historic election.

While briefly touching on various scandals --including one candidate caught on video peeing into a homeowner's coffee cup -- Oliver turned his focus on Conservative Prime Minister Stephen Harper, saying: “Don’t be deceived by his bland exterior. Where there is banality, there is evil.”

Noting that Harper once said there was “overwhelming and growing scientific evidence” that marijuana “is infinitely worse” than tobacco, an incredulous Oliver mocked the politician saying, “Are you high? Marijuana is not worse than tobacco!”

Oliver pointed out Harper's extremist anti-Muslim views that have led him to enact laws specifically targeting the religion, including banning women from wearing the niqab while taking the oath of citizenship.

The host then turned to making fun of the prime minister's side project: playing in a rock and roll band known as the Van Cats --  shown covering a sickly sweet version of "Sweet Caroline."

“Canada is America’s next-door neighbor, and Stephen Harper is her dickhead boyfriend," Oliver explained. "You know, the one she won’t split up with despite the fact that he tells her what to wear and makes her listen to his shitty, shitty band.”

The host then pointed out that -- as a non-Canadian -- his advocacy in Canada's election was subject to a $5,000 fine and 6 months in a Canadian jail (which he said was probably six months stuck in frozen Ottawa) and said he might as well get his money's worth.

With that in mind, he brought on Canadian Meyers who said, "I love Canada. But the fact that it has a law banning outsiders from telling Canadians how to vote is one of the least Canadian things possible. Oh, and don’t vote for Stephen Harper.”

“Don’t do it, and I’ll tell you why: Stephen Harper doesn’t care about black people,” added Oliver, referencing Kanye West’s infamous George W. Bush rant during a fundraiser with Myers.

Oliver corrected himself, saying, “Sorry, what I meant to say was: Stephen Harper doesn’t care about Muslim people.”