John Oliver tells Stephen Colbert: 'I couldn't give less of a sh*t' about Donald Trump 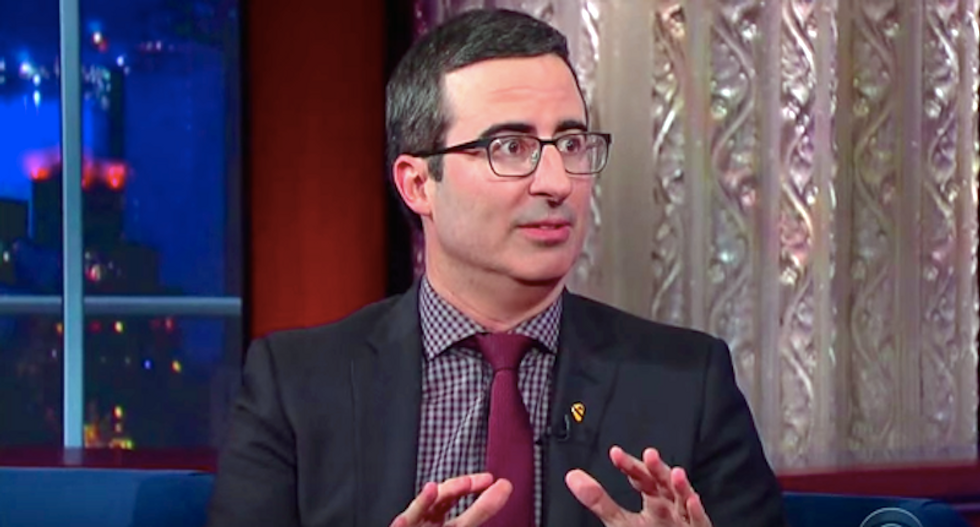 John Oliver said he "couldn't give less of a sh*t" about Donald Trump.

The host of HBO's "Last Week Tonight" appeared Wednesday night on "The Late Show With Stephen Colbert," where he told his fellow "Daily Show" alumnus that it was simply too early to care about the 2016 election.

"It's 2015 right now," he reminded Colbert. "I don't care until it's the same year as the thing I'm supposed to care about."

Oliver acknowledged that he wasn't an American citizen, and Colbert asked why he cared at all if he couldn't even vote.

"Taxation without representation -- you got all pissy about it when we did it," said Oliver, a British citizen. "Where's my vote? I'll throw your coffee into the river."

Oliver said his show was only a half hour long, so he and his producers didn't have to feign interest in the election just to fill airtime.

Colbert asked what issues Oliver thought the media and the candidates themselves should be focused on, and he suggested "almost anything that isn't election-related."

"There are plenty of problems in the world that they might want to talk about rather than themselves," Oliver said.

Colbert reminded Oliver that those topics tended be sad, while Trump's hair is basically a comedian's dream.

"You know, it's made of cotton candy," Colbert said.

Colbert asked Oliver if he missed their old boss, Jon Stewart, as much as he did.

Oliver agreed that new "Daily Show" host Trevor Noah had "crushed it" in his first week on the air, but he said Stewart was a tough act to follow.

"He's taking on the impossible," Oliver said. "You can't replace the irreplaceable."

Colbert, who took over the CBS "Late Night" program from David Letterman, joked that he "wouldn't know what that's like."