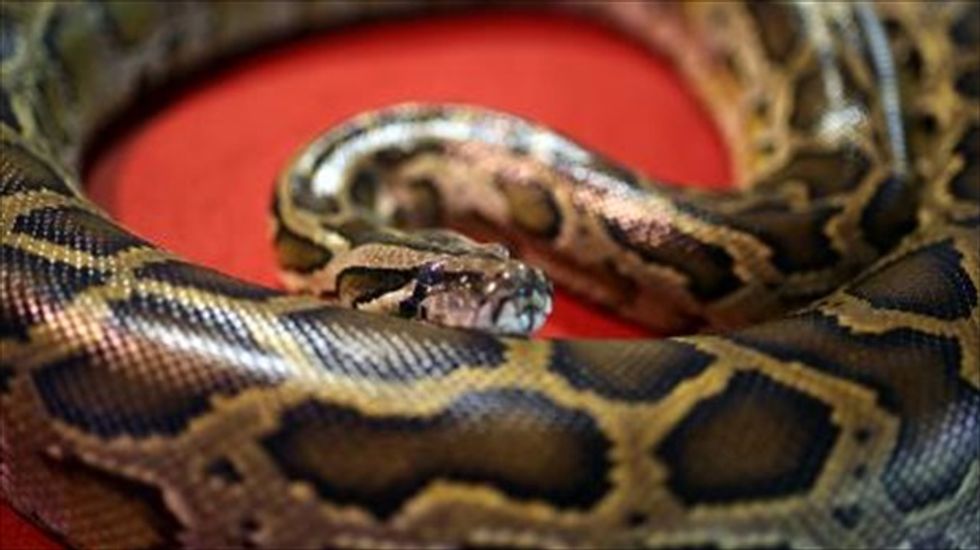 A Kentucky pet shop owner was nearly killed by a python before a quick-thinking police officer saved his life.

Wilkins was cleaning the python's cage when the snake latched onto his arm and then coiled around his body.

Officers said the man was lifeless and blood was splashed on the walls from an apparent bite wound to the shop owner's neck, reported WCPO-TV.

One of the three officers who responded, Lt. Greg Ripberger, was familiar with snakes and knew better than to shoot the animal -- which would have caused the snake to constrict even tighter and likely kill the man.

"If I would have been by myself, I would have thought of shooting it," Police Chief Tom Collins, who responded to the call, told The River City News.

Instead, Ripberger grabbed the snake after it briefly lifted its head off Wilkins' arm and managed to uncoil it from the shop owner's lifeless body.

Collins and Sgt. Daron Arnberg quickly grabbed the man as Ripberger put the snake back in its cage, police said.

They were able to get Wilkins breathing on his own before he was taken to a nearby hospital, where he remains in critical condition with life-threatening injuries.

"How do you prepare for this, and seeing this man and this snake?" Collins said. "The seconds that, literally, the decisions were made, and you just hope you were making the right decisions. It's like something out of a book. You just really can't describe it. Of all the events and things you respond to, to respond to a call of this nature where a snake has bit a guy and now he's strangling him to death. He was literally coiled from the guy's torso all the way up around his neck."

The shop specializes in breeding snakes, and this particular snake was more aggressive than most and not accustomed to being handled by humans.

Police found more than 100 snakes in the store.