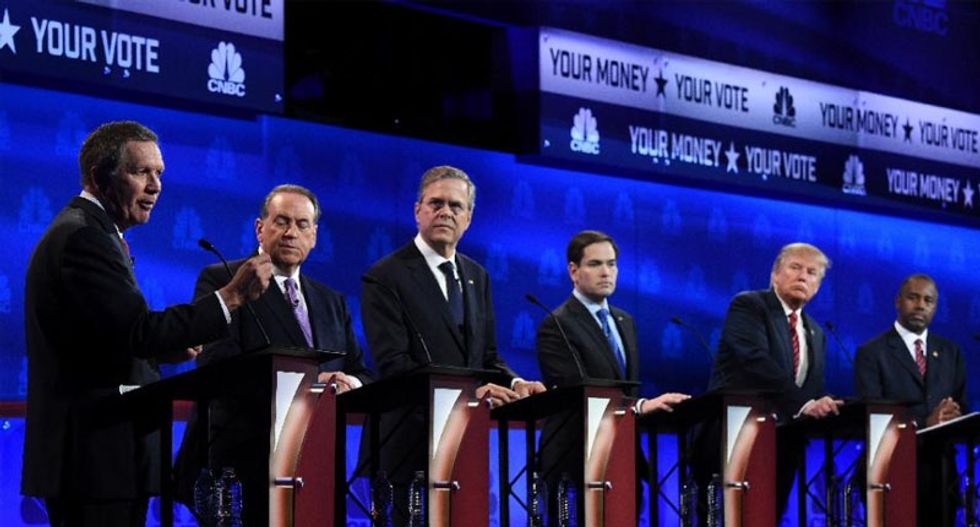 The knives came out as White House hopefuls traded barbs at Wednesday's Republican primary debate in Colorado. Here is a selection of the evening's best quotes:

CHICKEN IN EVERY POT

"Why don't we just put a chicken in every pot, coming up with these fantasy tax schemes? Folks, we got to wake up. We cannot elect somebody that doesn't know how to do the job" -- Ohio Governor John Kasich, laying into Republican frontrunners Donald Trump and Ben Carson

LAZY AS A FRENCHMAN

"This is a six-year term, you should be showing up. Literally, the Senate, is it a French work week? Just resign and let somebody else take the job" -- Jeb Bush, accusing Marco Rubio of neglecting his congressional duties

"I do carry on occasion. Sometimes a lot. But I like to be unpredictable" -- Donald Trump, asked about his special permit to carry a gun in New York

ALL THE MEDIA'S FAULT

"The mainstream media is saying it was the greatest week in Hillary Clinton's campaign. It was the week she got exposed as a liar" -- Marco Rubio, attacking what he sees as pro-Democrat bias in the US media

ALL THE MODERATORS' FAULT

"This is not a cage match. Donald Trump, are you a comic book villain? Marco Rubio, why don't you resign? Jeb Bush, why have your numbers fallen? The contrast with the Democratic debate, where every thought and question from the media was, which of you is more handsome and why?" -- Texas Senator Ted Cruz

AT LEAST WE'RE NOT DEMOCRATS

"The three people left on the Democratic stage: I see a socialist, an isolationist, and a pessimist. And I can't tell you which one is which" -- New Jersey Governor Chris Christie

"I may not be your dream candidate just yet. But I can assure you I'm Hillary Clinton's worst nightmare" -- Former Hewlett-Packard boss Carly Fiorina, the only woman in the Republican race

BLOATED AS A BLIMP

"The blimp incident that happened today, a perfect example of government: basically a bag of gas, cut loose, destroyed everything in its path, left thousands powerless but they couldn't get rid of it, because we had too much money invested so we had to keep it" -- Arkansas ex-governor Mike Huckabee, riffing on an intelligence blimp that came unmoored near Washington hours before the debate