Ex-NBA star Odom reported critical, Kardashian at his side 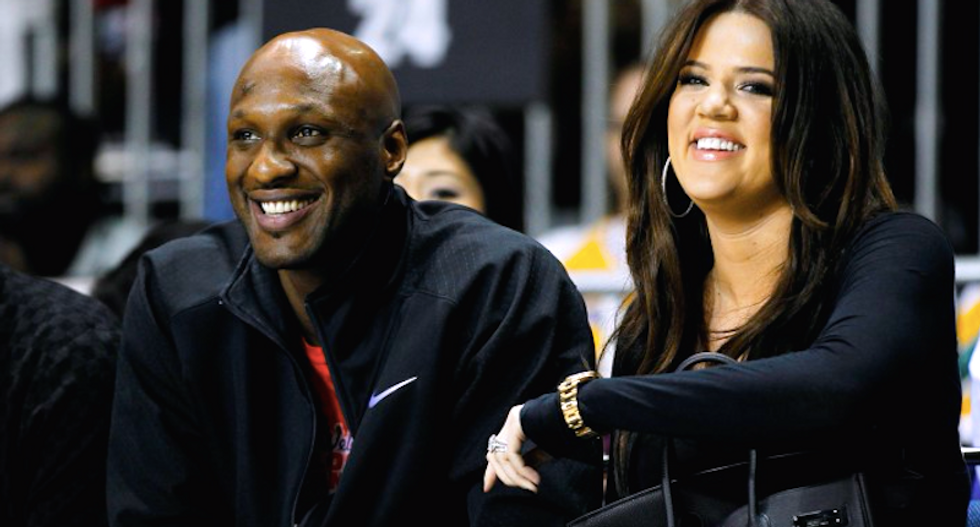 Los Angeles Lakers' Lamar Odom and his wife television personality Khloe Kardashian sit courtside as they attend the 2011 BBVA All-Star Celebrity basketball game as a part of the NBA All-Star basketball weekend in Los Angeles, in this February 18, 2011, file photo. Odom was hospitalized on October 13, 2015, after he was found unresponsive at a Nevada brothel, law enforcement officials said. (REUTERS/Danny Moloshok/Files)

Lamar Odom, a former professional basketball player and reality TV star, was reported to be fighting for his life in a Las Vegas hospital on Wednesday after he was found unresponsive at a legal brothel.

The 35-year-old former Los Angeles Lakers standout and ex-husband of Khloe Kardashian suffered a medical emergency on Tuesday at the Love Ranch brothel in Crystal, Nevada and was taken to the hospital, the Nye County Sheriff's Office said.

It was the latest episode in Odom's roller-coaster personal and professional life.

But celebrity website TMZ.com cited unidentified sources as saying Odom was in a coma and that some of his organs were failing.

Another outlet, E!, also cited unnamed sources in reporting that Odom suffered brain damage and at least one stroke, and was on a ventilator after taking multiple drugs. The E! cable TV channel airs the reality show "Keeping Up With the Kardashians."

The brothel's owner, Dennis Hof, said that, during his three-day stay, Odom had been taking large amounts of "herbal Viagra," a nonprescription product which can dramatically lower blood pressure and interact with other medications.

Khloe Kardashian, whose whirlwind romance with Odom was captured in "Keeping Up With the Kardashians" and its spin-off, "Khloe and Lamar," was at his bedside, TMZ and Us Weekly reported.

The couple split in 2013 after four years of marriage and their divorce was finalized in July, though she has remained in close contact with him.

Odom publicist Eve Sarkisyan said in a statement that "family and friends are extremely concerned for Lamar" but warned against "false information being circulated unofficially."

Odom's hospitalization followed a downturn in a 14-season career with National Basketball Association teams, including the Lakers from 2004-2011.

On top of the pressures of the life of a top NBA player, Odom, whose mother died when he was 12, had to deal with being a reality TV star after marrying Kardashian.

The 6-foot, 10-inch-tall (2-metre) athlete has long been reported to have had issues with cocaine abuse, although this has never been publicly confirmed. He has admitted only to using marijuana.

During the 2000-2001 season, Odom was suspended for violating the NBA's antidrug policy. In 2013, he pleaded no contest in Los Angeles to a charge of driving under the influence and was ordered to undergo rehabilitation for three months for alcohol abuse.

Former teammates rallied to his support on Wednesday.

Lakers player Kobe Bryant left following a preseason game to visit Odom in the hospital. Others took to Twitter.

"I have been praying all morning for my good friend and Laker great, Lamar Odom, that God will bless him to pull through," former Lakers great Earvin "Magic" Johnson, said in a tweet.

"What most people don't realize about Lamar Odom is that he's a better person than he is a basketball player," Johnson said.

Former teammate Dwyane Wade of the Miami Heat tweeted, "Everyone will ask why or say how could he do this or that. If you're not walking in life thru his eyes, you will never know what it's like."

Odom won two championships with the Lakers in 2009 and 2010. Currently a free agent, he last played for the Los Angeles Clippers during the 2012-13 season and is no longer attached to any team.

"He was polite and reserved, and he told multiple employees that he was there to get some privacy and spend some time relaxing," Hof said. While prostitution is illegal in most of the United States, brothels are legal in some parts of Nevada.

Hof said staff reported that Odom had been taking "herbal Viagra" capsules but that no illicit drugs were found in his room. Brothel employees found Odom unconscious on Tuesday and called police after he started vomiting, Hof said.

Despite their rocky relationship and divorce, Kardashian has remained close to Odom. In an interview with Complex magazine for its August/September issue, she said she still missed him and spoke to him frequently by phone.

"Lamar is genuinely one of the best people I've ever met, and everyone says that when they meet him," Kardashian said.

An MSNBC "Morning Joe" panel that was discussing former Vice President Mike Pence being booed by Donald Trump fans during a conservative Christian conference over the weekend led to one regular contributor to point out that it was entirely possible Republicans could blow their chance at regaining power in the 2022 midterms.

Discussing what was described as Trump's "cult," regular Morning Joe contributor Donny Deutsch served up a warning to Republicans that they are at risk of engaging in a "cycle" of losing.

The Trump-backed "audit" of Arizona's 2020 election results is expected to conclude in the coming weeks, and CNN reporter Donie O'Sullivan sees troubling signs that it could spark a fresh round of right-wing violence.

In the latest newsletter for CNN's "Reliable Sources," O'Sullivan thinks that Trump's decision to hype up the audit, which has been widely criticized by elections experts for lacking procedural rigor and integrity, mirrors his decision to hype up the January 6th "Stop the Steal" rally in Washington D.C., which he promised followers would be "wild."

On June 15, the U.S. House of Representatives passed a bill to award the Congressional Medal of Honor to the police officers who defended the U.S. House of Representatives against a violent insurrectionist mob on January 6. It was a 406-21 vote, and the 21 House members who voted against it were Republicans. Meanwhile, in Missouri, Republican Gov. Mike Parson recently signed into law a bill that calls for fines of police departments if they enforce federal gun laws. The St. Louis Post-Dispatch's editorial board, in a blistering editorial published on June 20, cites these controversies as examples of the fact that the GOP has no business calling itself the "law and order party."

"It was more than half a century ago that Richard Nixon successfully branded the GOP as the 'law and order' party, creating a political banner that has since been wielded, very effectively, by generations of Republicans," the Post-Dispatch's editorial board explains. "It was infused with some hypocrisy from the start — Nixon would ultimately be driven from the White House for his crimes in office — but in principle, at least, it aligned with a central tenet of conservatism: that respect for the law provides the restraint of passions that is necessary for society to thrive. So how on Earth did that Republican Party become the one we see now?"