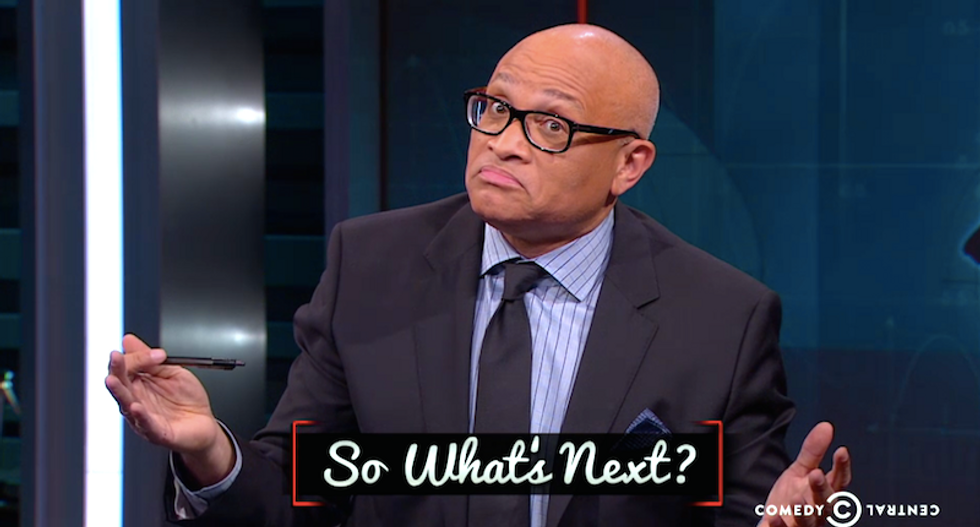 Larry Wilmore examined the horrible trend of toddlers shooting themselves or someone else on a weekly basis so far this year.

The Washington Post found that 43 children aged 3 years old or younger had shot someone this year, including 31 toddlers who found a loaded gun and shot themselves.

The "Nightly Show" host was so shocked he found himself at a loss for non-swear words.

"You have to be f*cking kidding me," Wilmore said. "Toddlers? I can't even -- this story is too sad. You know, I have too many emotions that I have to express that aren't quite appropriate for a late-night comedy show. I think the only way I can express them is in the 'Nightly Show' soundproof despair booth."

Wilmore stepped away from his desk to curse inside the soundproof booth set up onstage.

When he returned, he pointed out that the Post had not included shootings committed by slightly older children, including a 6-year-old Chicago boy who killed his 3-year-old brother over the weekend with a loaded gun his father kept on top of the family's refrigerator.

"So let me ask you a question: Should we just not care about this, and chalk it up to another -- how did Jeb (Bush) put it? -- 'stuff happens,'" Wilmore said, showing a video clip of the presidential candidate's remark. "Thanks, asshole -- I forgot."

Massachusetts is the only state that requires gun owners to lock up their guns at all times to prevent accidental shootings, Wilmore said, and he also noted that gun shops are broadly protected from legal accountability under a 2005 federal law when weapons they sell are later used in crimes.

"I just really have to ask one question for the NRA, gun activists, anyone on Capitol Hill standing in the way of gun reforms: So what's next?" Wilmore said. "Whenever there's a mass shooting in America, you guys say, 'Well, this wouldn't have happened if everyone had guns.' Well, by your rationale, we can solve toddler shootings by arming every toddler."

"What's next?" he continued. "Maybe you think we should start training toddlers, send them to firearms class -- maybe call it Gunboree. They can learn songs like 'Old MacDonald Had A Glock' (or) 'If You're Happy and You Know It, Pop a Cap.' So what's next? Would it just be easier to pass toddler control, toddler background checks, limits on the high-capacity vaginas that just keep pumping out toddlers? That's an easy one -- I know how much the GOP likes to legislate women's vaginas."

Then he turned serious.

"Here's the real question, I want you to actually think about this: Are the frequent deaths of children just the cost of doing business in your version of America?" Wilmore said. "It's a yes-or-no answer -- and the answer is not yes."