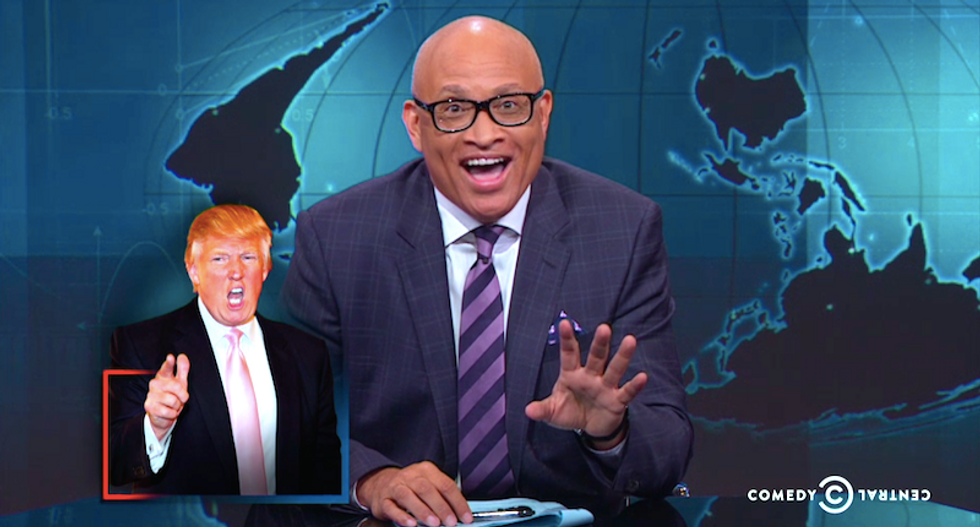 The Republican frontrunner released his tax plan Monday that would remove about half of all households -- roughly 75 million families -- from the federal income tax roll.

Larry Wilmore examined this plan Wednesday on "The Nightly Show," and he pointed out that single people who earn less than $25,000 or married couples who earn $50,000 or less would not be required to pay income taxes under Trump's proposal.

But, Trump being Trump, that's when things get goofy.

"How will these 75 million people pay their taxes?" Wilmore said. "This is true, guys -- according to Trump's website, they get a new, one-page form to send the IRS saying, 'I win.'"

"'I win?'" Wilmore said, laughing. "Only Donald Trump would (describe) households below the poverty line as a win. That's right, the poors win -- 364 days a year, loser, April 15, winner."

That's basically what the Journal argued more than a decade ago in a series of editorials, and conservatives still complain that "lucky duckies" who don't earn enough to pay income taxes constitute a "moocher" class.

Trump's plan would actually expand that category while also cutting taxes for the top marginal income rate, and the proposal would also eliminate the marriage penalty, estate tax and alternative minimum tax, and businesses would pay no more than 15 percent of their income in taxes.

"We took a closer look at Trump's website and discovered another form you might get in the mail," Wilmore said. "Now if you, like Trump, have to pay ex-wives, you get a one-page form saying, 'They win.'"

Wilmore explained that many of the proposals would actually benefit Trump and other extremely wealthy individuals.

"Donald Trump's tax plan would mostly benefit Donald Trump," Wilmore said. "This would be like if Obama slashed taxes on mom jeans."

Trump claims his tax plan would add nothing to the deficit, although some analysts have found that the various cuts would add up to $12 trillion to the national debt.

The real estate tycoon and reality TV star also claims that his plan would actually require him to pay more taxes, not less.

"He's lying to Americans, and yet he's still leading in the polls," Wilmore said. "It makes my mind explode."