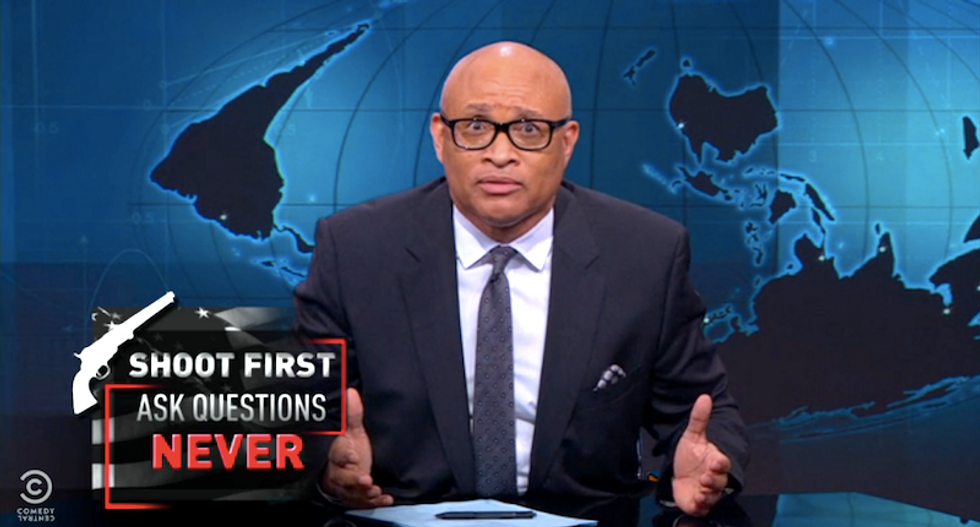 Larry Wilmore took aim at the rhetorical shifts and misdirections conservatives use to keep Americans from having an honest conversations about guns and gun violence.

The "Nightly Show" host said the media takes care of the first step in the process by overwhelming viewers and readers with numbers -- as they did last week.

When a gunman killed nine people and wounded nine others at an Oregon community college, that marked the 45th school shooting this year and the 142nd school shooting since Sandy Hook, and the media reported there had been 294 mass shootings so far this year, leaving 380 people dead -- and that number doesn't even include the 9,953 people killed this year in "everyday gun violence."

"That is a lot of numbers," Wilmore said. "You see, by overwhelming us with numbers, you do two things: First, you make us tired. Second, you make us feel like we're about to have that conversation. Are we going to talk about guns? That's exciting. No, we're just talking about numbers -- that's exhausting."

He said conservatives, including Republican presidential candidates Donald Trump and Ben Carson, then try to change the conversation to mental health by blaming the regular massacres on "crazies," rather than the easy availability of highly efficient instruments of death.

Then other conservatives, such as GOP candidate Mike Huckabee, change the topic to religion and suggest "tinkering" with the First Amendment to preserve the Second Amendment.

"The shifteroo is f*cking brilliant, you guys," Wilmore said. "We're still not having that honest conversation about guns."

Next, conservatives attack President Barack Obama after he makes his routine "somber plea," and Fox News offers them a platform to complain about the president's failed policies in the Middle East and for supposedly ignoring gun violence in black communities.

After that, conservatives offer a litany of horrible suggestions -- which usually means a call for more guns in more places.

"The stupidity of coming out of people's mouths is so jaw-dropping that your mouth stays open in horror, thus preventing you from having the conversation," Wilmore said.

Finally, Wilmore said, the conversation is shut down by claiming it's disrespectful after the tragedy to try to find a solution to prevent similar tragedies.

"Look, all I know is, if we never have this conversation and we keep thinking it's too soon, we'll stay in a constant state of 'too late,'" Wilmore said.