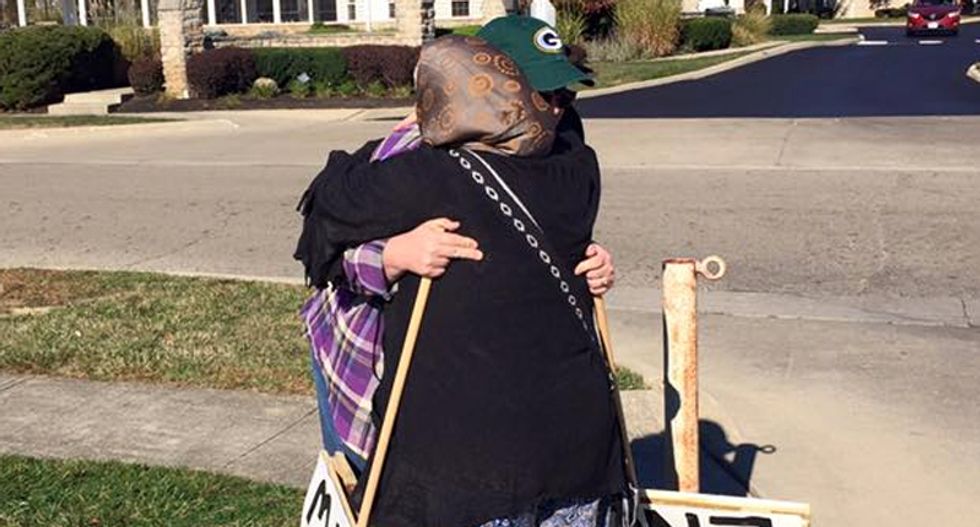 The  woman -- identified as Annie on Facebook --showed up Saturday at the Noor Islamic Cultural Center In Dublin, Ohio, on the day of the misleadingly named Global Rally for Humanity -- a nationwide protest against Muslims in the U.S.

Carrying multiple signs --including one stating 'No Sharia law"-- Annie was met by multiple counter-protesters who engaged her in a lively, but mostly friendly, debate about Islam, the Koran and President Obama, whom she claimed was a Muslim.

In the rather long video, both Annie and the counter-protesters agreed there was too much bloodshed in the Middle East, with the woman complaining about the "muzzies," stating that too many Muslims don't understand the Koran -- while admitting she has never read it herself.

Confronted by a Muslim woman wearing a hijab who offered to pose with her for a photo by saying,"I'm an American too," Annie accepted an invitation to enter the mosque and meet with the members who applauded her as she entered the foyer.

Before entering, Annie was stopped by a local policeman sent to keep an eye on the protest that never happened, who asked her if she was carrying a weapon. She replied, "nope," but joked that -- as a Christian -- she would probably burst into flames upon entering.

Watch the video below uploaded to YouTube by Micah Ben David: