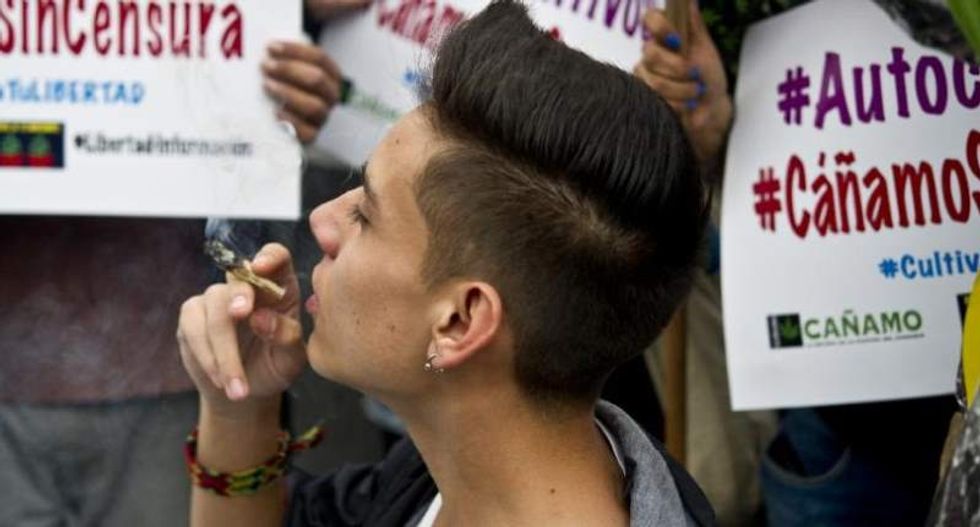 A young man smokes a joint during a rally in front of the Supreme Court in Mexico City on Oct. 28, 2015. Photo by Yuri Cortez for Agence France-Presse.

Mexico's Supreme Court postponed on Wednesday a much-anticipated hearing on a citizen group's bid to legally smoke marijuana, a potential landmark case in a country beset by drug violence.

While dozens of legalization supporters gathered outside the court in the capital's historic center, a judicial official said the justices decided to delay the debate until next week or a later date.

The case was brought by the Mexican Society for Responsible and Tolerant Personal Use, whose Spanish acronym spells "SMART," which is seeking permission to grow and consume its own pot.

Their bid reached the top court after government health regulators refused to grant them a permit.

"It's a problem that deserves to be analyzed and discussed, because it would result in us becoming a different nation," said Fabian Aguinaco, a lawyer for SMART.

Arturo Zaldivar, considered a liberal member of the court, sympathized with the group and put the case on the agenda, proposing that SMART be given permission to grow and consume its own marijuana for recreational use.

Dozens of supporters of legalization demonstrated outside the court, some smoking joints, others brandishing flash with the marijuana leaf.

Supporters hope a win for SMART could lead to other groups winning similar cases, and convince Congress to revive bills seeking to legalize marijuana.

Backers argue that legalizing marijuana could strip drug cartels of a key source of revenue and reduce violence that has killed tens of thousands of people in the past decade.

But President Enrique Pena Nieto, who took office in December 2012, is opposed to legalizing drugs.