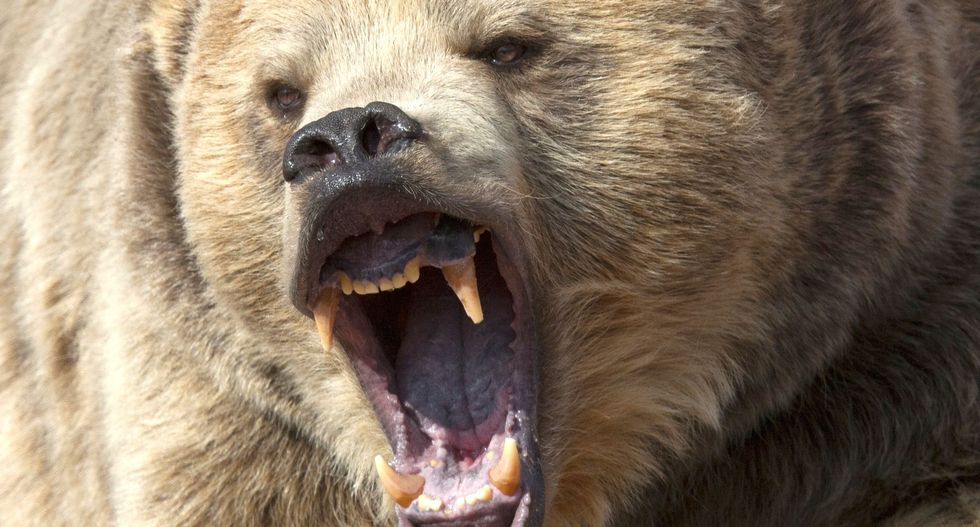 A hunter tracking elk in the Montana mountains said he fended off an attacking grizzly bear by shoving his arm into its throat to induce a gag reflex that would frighten it away, according to state wildlife managers.

Chase Dellwo, 26, was hunting with a crossbow for elk with his brother in the rugged foothills of the Rocky Mountains in northwestern Montana on Saturday morning when he surprised a 400-pound (180-kg) male grizzly lumbering along a creek, said Montana Fish, Wildlife and Parks spokesman Bruce Auchly.

"It was startled, he was startled; the bear engaged in a defensive attack," he said on Monday.

Dellwo later told wardens he crammed his arm crosswise into the back of the grizzly's jaws because he had read an article that said large animals have pronounced gag responses.

Wildlife managers were not acquainted with the literature or purportedly excessive gag reflexes among the massive, hump-shouldered bruins, but Dellwo's action prompted the bear to break off its attack and lumber away, Auchly said.

Wardens do not intend to capture the bear or kill it since it engaged in a defensive, rather than predatory, attack.

"If the grizzly wanted to kill him, it would have killed him," said Auchly.

Dellwo, of Bellgrade, Montana, was driven by his brother to a nearby clinic before being taken to a hospital in Great Falls where he remained on Monday for treatment of injuries that include cuts to his head and face, his wife Rebecca told Reuters.

Wildlife managers advise carrying bear spray to ward off attacks. Dellwo was not equipped with bear spray when he encountered a grizzly that is among the estimated 1,000 that roam along the northern Continental Divide in Montana.

Just five populations of the federally protected bears are found in the Lower 48 states, including the more than 750 grizzlies in and around Yellowstone National Park in Wyoming.