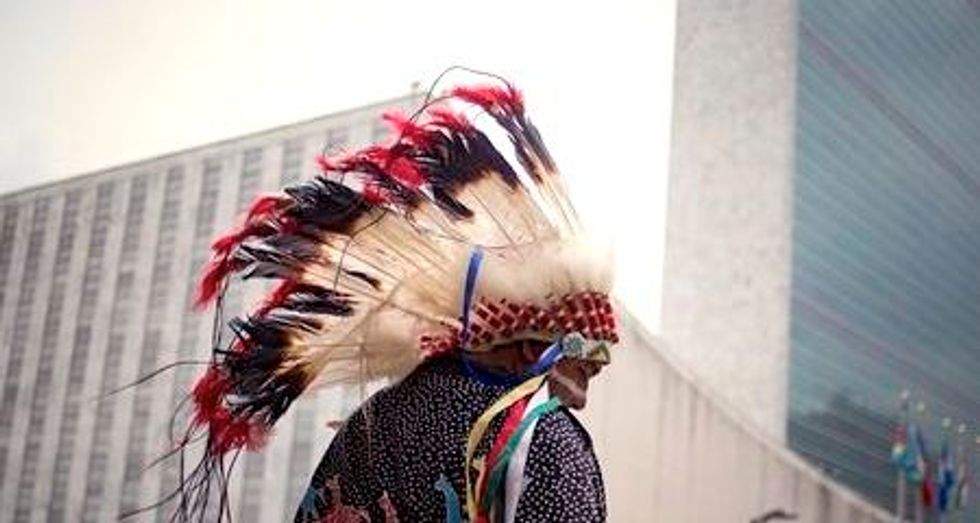 Travis Mazawaficuna of the Dakota Nation (Sioux) Native American tribe arrives with others to the International Day of the World's Indigenous Peoples outside the United Nations in Manhattan, New York, in this file photo taken August 9, 2013. REUTERS/Adrees Latif/Files

About four miles from the world's largest Christopher Columbus parade in midtown Manhattan on Monday, hundreds of Native Americans and their supporters will hold a sunrise prayer circle to honor ancestors who were slain or driven from their land.

The ceremony will begin the final day of a weekend "powwow" on Randall's Island in New York's East River, an event that features traditional dancing, story-telling and art.

The Redhawk Native American Arts Council's powwow is both a celebration of Native American culture and an unmistakable counterpoint to the parade, which many detractors say honors a man who symbolizes centuries of oppression of aboriginal people by Europeans.

Organizers hope to call attention to issues of social and economic injustice that have dogged Native Americans since Christopher Columbus led his path-finding expedition to the "New World" in 1492.

The powwow has been held for the past 20 years but never on Columbus Day. It is part of a drive by Native Americans and their supporters throughout the country, who are trying to rebrand Columbus Day as a holiday that honors indigenous people, rather than their European conquerors. Their efforts have been successful in several U.S. cities this year.

"The fact that America would honor this man is preposterous," said Cliff Matias, lead organizer of the powwow and a lifelong Brooklyn resident who claims blood ties with Latin America's Taino and Kichwa nations. "It makes absolutely no sense whatsoever."

But for many Italian Americans, who take pride in the explorer's Italian roots, the holiday is a celebration of their heritage and role in building America. Many of them are among the strongest supporters of keeping the traditional holiday alive.

Berkeley, California, was the first city to drop Columbus Day, replacing it in 1992 with Indigenous Peoples Day. The trend has gradually picked up steam across the country.

This month, Portland, Oregon, Albuquerque, New Mexico and Bexar County, Texas, decided to eliminate Columbus Day and replace it with the new holiday. Oklahoma City is set for a vote on a similar proposal later this month.

Columbus Day became a U.S. federal holiday in 1937. The federal government and about half of U.S. states give public employees paid leave, according to the Council of State Governments. Schools and government offices are generally closed, but many private businesses remain open.

Support for Indigenous Peoples Day has steadily risen in recent years, paralleling the growing perception that the wave of European settlement in the Western Hemisphere was genocidal to native populations.

Gino Barichello, who attended Berkeley city council meetings in the 1990s that resulted in the establishment of Indigenous Peoples Day, said he viewed the trend with pride.

"To have a recognition and celebration of all the indigenous cultures of the U.S., and Berkeley being one of the catalysts leading that charge, is very exciting," said Barichello, who says he is half Italian and half Muscogee, a Native American tribe based in Oklahoma.

The Columbus Citizens Foundation, a non-profit that organizes the parade, says on its website the event "celebrates the spirit of exploration and courage that inspired Christopher Columbus’s 1492 expedition and the important contributions Italian-Americans have made to the United States."

"By default, we're like the collateral damage of this trend," he said.

The foundation's leadership council is scheduled later this month to take up the issue.

One of the proposals expected to be floated at the meeting is to change the name to Italian American Day, taking the spotlight off Columbus and other European explorers. Under this proposal, Indigenous People Day would be celebrated on a different day.

"I think many people believe there could be a middle road," Viola said.