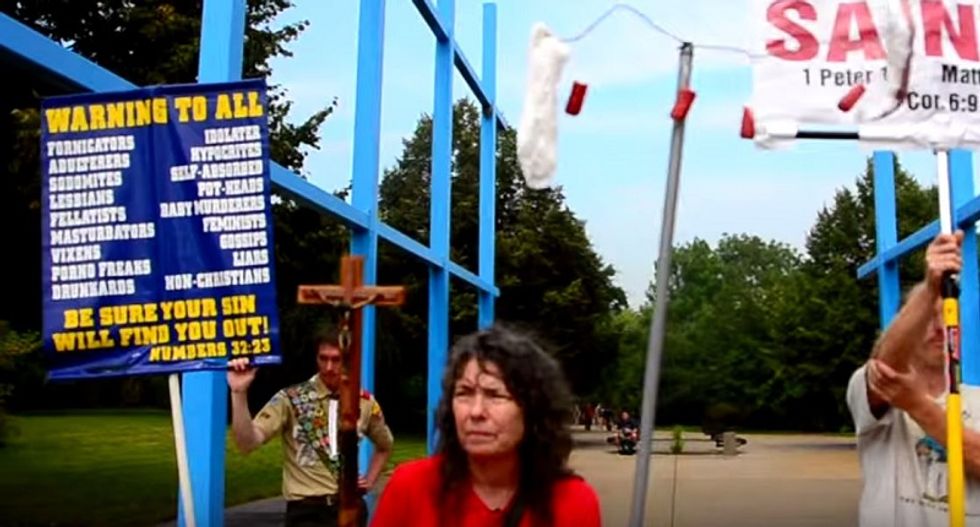 A group that attempts to proselytize to college students by carrying fake bloody tampons onto campus seem to be misunderstood when they had to explain they are "not against periods."

A YouTube video posted Tuesday shows Cindy Smock on an unspecified campus berating students for partying and drinking while brandishing a stick from which she dangled tampons and sanitary napkins covered with red ink.

The video was posted by Smock's husband, George Edward "Jed" Smock, Jr, who identifies himself online as "Brother Jed" and regularly joins her in these types of displays at college campuses.

"How do you deal with your period?" one female student asked. Another added, "she's preaching against tampons and stuff."

This forced Smock to explain, "I -- I'm not against periods."

In the bizarre video that features dramatic piano music and a large group of young people who don't seem to be taking her seriously at all, Smock tells onlookers that "Mrs. Doubtfire is in hell."

"Yes boys and girls," she hollered, "Robin Williams is in hell. Mrs. Doubtfire went to hell. Because Robin Williams bit the bloody tampon one too many times."

She then urges the students to "repent of the your sins, stop licking on the bloody tampon," but not before she said she had to guard her cross because "the Muslims are trying to steal it today."