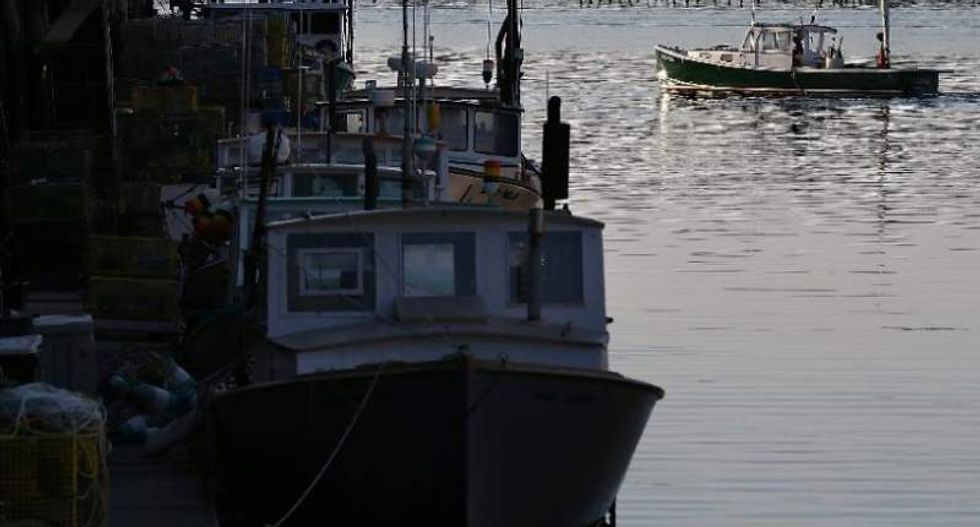 A fishing boat leaves a dock on July 21, 2012 in Portland, Maine, centrally located on a gulf scientists say has warmed "99 percent faster than anywhere else on the planet," threatening vital fisheries. Photo by Justin Sullivan for Agence France-Presse.

Unusual warming in the waters off the northeastern US has killed off vast numbers of Atlantic cod, further endangering a valuable and iconic fishery despite years of fishing restrictions, researchers said Thursday.

New England cod stocks are on the verge of collapse, numbering at three to four percent of what scientists say are sustainable levels.

The problem has been fueled by overfishing, and exacerbated by a stark warming trend in the Gulf of Maine that is unparalleled on Earth, researchers said in the journal Science.

"The Gulf of Maine had warmed faster than 99.9 percent of the global ocean over that period," said lead author Andrew Pershing, chief scientific officer of the Gulf of Maine Research Institute, who studied records back through the 1900s for comparison.

"It was a rate that few large marine ecosystems had ever encountered," he told reporters.

The reasons for the spike include global warming and a shift in the Gulf Stream.

For fish, these warmer temperatures led to fewer offspring and fewer juveniles surviving until adulthood.

Even a series of restrictions on cod fishing put in place to try to save the population was too slow to keep up with the fast-rising temperatures.

"The rate of changed outpaced the ability of people to make decisions about the ecosystem," Pershing said.

Quotas kept falling, meaning that fishermen were allowed to take fewer fish, but the models that helped managers make these decisions "consistently overestimated the abundance of cod," Pershing added.

"Warming waters were making the Gulf of Maine less hospitable for cod, and the management response was too slow to keep up with the changes."

Experts know that the warming climate is already forcing many species to shift from their traditional habitats toward temperatures that are more suited for their survival.

But rather than move north, the struggling Gulf of Maine cod population -- a species that prefers cold water -- has actually shifted southward over the past 45 years, researchers say.

A combination of both overfishing and reduced reproduction in warming waters are to blame for this unfortunate migration, experts say.

"We often wonder if it is fishing or climate, but it is both," said Janet Nye from the School of Marine and Atmospheric Sciences at Stony Brook University in New York.

"It is almost always environmental factors combined with fishing that cause stocks to collapse or fail to recover."

But not all cod are in the same boat.

A study out earlier this week found that cod to the north, off the coast of Canada, are rebounding and have made a comeback in recent years.

Researchers said their findings on the Gulf of Maine cod were likely to stoke controversy among fishermen, whose livelihoods are already limited by the fishing restrictions.

More adaptable approaches to management of fisheries could help resolve the problem in the future, said Katherine Mills from the Gulf of Maine Research Institute.

"The Gulf of Maine cod, I think, is a wake-up call that we need to bridge the disconnect that currently exists between oceanography, fisheries ecology and stock assessment science," she said.

"There is important science being done in all three of these fields, but perhaps their greatest value will be realized when they are brought together."