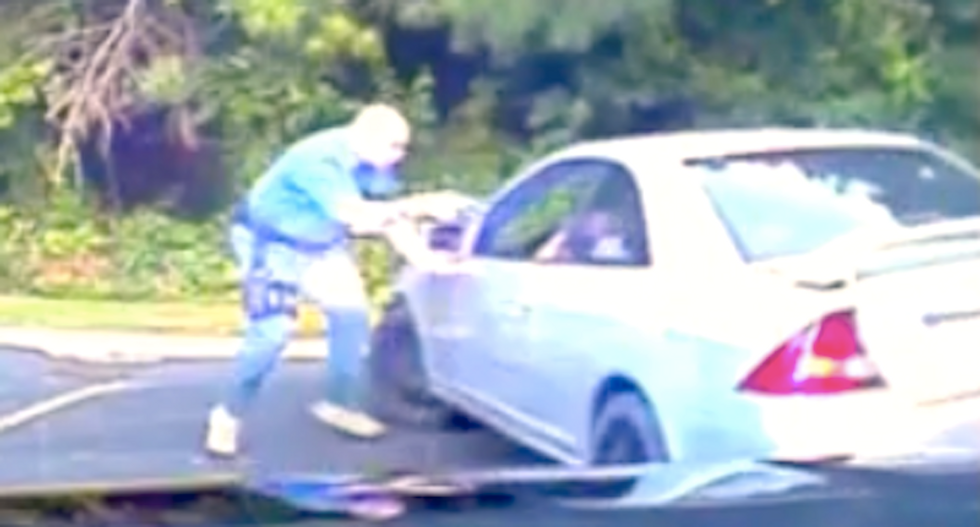 A South Carolina police officer won't face any charges in the shooting death of an unarmed man during a drug bust.

Prosecutors declined to charge Seneca Police Lt. Mark Tiller in the July 26 shooting death of 19-year-old Zachary Hammond as he attempted to drive away from the officer in the parking lot of a fast food restaurant.

Investigators finally released dashboard camera video, which shows Tiller park his patrol car directly behind the car where Hammond and a friend, Tori Morton, were eating food while on a first date.

Video shows the officer get out of his patrol car and draw his gun as Hammond backs up and attempts to drive around the approaching Tiller.

The officer gets close enough to Hammond's car to place his hand on the hood before he can turn the wheel and switch gears to drive forward past the officer -- who is leaning into the open driver's side window with his handgun drawn.

Hammond continues driving as the officer keeps his hand on the car's hood, and Tiller steps back once -- out of the car's path -- and opens fire twice less than 6 seconds after getting out of his patrol car in the Hardee's parking lot.

A witness said Tiller pulled Hammond's body from the car, went to the rear of his patrol car and pulled something out that he placed under the slain driver's body.

A police officer from a neighboring department said Seneca police officers lifted Hammond's lifeless hand and slapped it for high-fives.

The initial police report did not mention the shooting, which Chief John Covington said was justified because Tiller believed Hammond intended to run him over.

Chrissy Adams, the 10th Circuit Solicitor, announced Tuesday that she would not charge Tiller at the state level, saying the officer's actions were justified.

“What may seem ‘reasonable’ to any of us who are not in the heat of the moment or at risk of losing our life is a far cry from an officer actually being in a tense situation where he or she is force to make a split second decision while facing a criminal assailant,” Adams said in a statement.

Adams pointed to text messages later found on Hammond's phone that indicated he sold marijuana, acid, cocaine and prescription pills to multiple people and had referred to himself as a "criminal," a gang member and "like an animal now."

"(Hammond) even goes so far as to say that police will 'just take me one day,'" Adams said in a statement.

But the drug bust that led to Hammond's fatal shooting was apparently triggered by a text message mistakenly sent by "Tori" offering to sell a small amount of cocaine and marijuana to a South Carolina state trooper, who alerted Seneca police.

Tiller was unaware of Hammond's statements or that he had tried to evade arrest on an outstanding warrant -- but Adams said that didn't matter.

She said court rulings had found that a suspect's state of mind can later be used to justify an officer's actions even if the officer is unaware of that state of mind.

Hammond's family said they were surprised and disappointed by the prosecutor's decision.

Adams admitted the video showed a serious flaw in the way police officers are trained to respond to potential threats.

“When the full speed dash cam is viewed as a single piece of evidence standing alone, it does raise questions,” Adams said. "Our focus and our energy now need to be redirected toward training law enforcement officers in our State and ensuring training for situations such as this is offered on a recurring basis.”

Hammond's parents have filed a federal lawsuit asking the U.S. Department of Justice to investigate whether their son's civil rights were violated.

Morton, who was eating ice cream when Tiller approached and was not injured in the shooting, was arrested for possession of drug paraphernalia and faces a possible $500 fine.