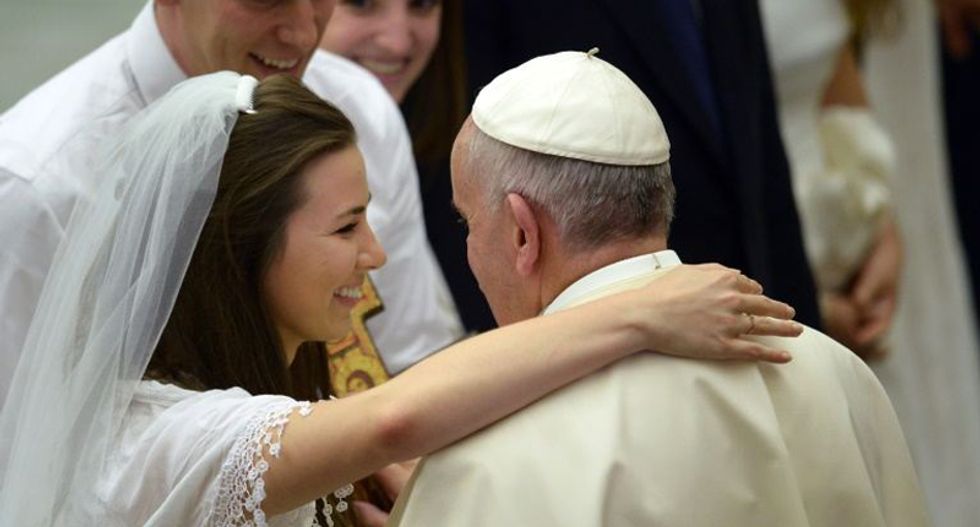 Divorced people who have remarried "are still part of the Church" and should not be treated as if they have been excommunicated or cast out, Pope Francis says (AFP)

New York Catholics basking in the glow of Pope Francis's recent visit are hoping that the imminent synod at the Vatican will make remarried divorcees more accepted by the church.

Three weeks of debate among bishops on the family that could radically reshape the Church's approach to divisive issues of divorce and homosexuality is due to begin in Rome on Sunday.

Canon law excludes remarried divorcees from taking communion and confessing to a priest, but worshippers leaving mass at The Church of Saint Agnes in Manhattan want that to change.

"My sister has been married for 15 years to a man who got married religiously before. She cannot get married in church. That's been bothering her ever since her civil marriage," says Carola, a well-dressed New Yorker in her 50s.

The ban on those who have divorced and remarried receiving communion has been in force for centuries but has become increasingly untenable as the number of divorces in Catholic families grows.

"They need to relax. If they turn their back on the people who got divorced and the women who had an abortion, they're going to alienate half the population," said Eric, a suited executive.

In September, Francis made it easier, quicker and free for Catholics to have their marriages annulled under reforms, saying that divorcees would always be part of the Church.

He has said the Church must tend to the "wounds" caused by family breakdown rather than seeking to exclude or judge people within its ranks living in "irregular" situations.

Ada Duran, a Catholic originally from Colombia but living in New York, welcomes the prospect of a quicker, cheaper process.

"It would be nice to make it easier for people to get annulment: cheaper, and also shorter. Many people don't do it today because of it," she told AFP outside the church in Manhattan.

"My sister got divorced and it took her 10 years. And it still is much easier here in the US than in my home country, Colombia. There, everything is very strict," she said.

- 'Everyone can be forgiven' -

In August, the pope said remarried divorcees were part of the Church and should not be treated as if they had been excommunicated.

"Awareness that a brotherly and attentive welcome... is needed towards those who... have established a new relationship after the failure of a marriage, has greatly increased," he said.

But for Joy Reyes, a New Yorker in her 60s, the September reform did not go far enough.

"Priests should help people taking these steps. Many of them are not educated, they don't know what to do," she said.

"My brother left his wife after 30 years. He's with a younger woman now. I told him: you should repent, you should pray. But he doesn't want to hear it," said Reyes.

"He tells me: I speak directly to God. So he doesn't go to church and he told me I shouldn't go either. But I do and I pray for him."

Ruth, a practising Catholic leaving the same church, said those who wanted to be part of the Church should follow the rules, but welcomed the pope's focus on mercy.

"Everyone can be forgiven. You have to review it case by case," she told AFP.

Vatican officials have been unusually frank in admitting that clashes are inevitable during what will be the final round of a review of Church teaching on questions related to family life.

The most important division is between reformers who want to make the Church more accommodating towards gay, divorced or cohabiting believers, and those opposed to any dilution of centuries-old doctrine which holds that marriage is for life and that homosexuality is sinful or an abomination.

Francis has made it clear he favors a fresh approach and his status as the infallible Vicar of Christ means he can ultimately decide what he likes.

But most experts agree he will be looking for majority support for any changes.

For Eric, the suited executive, the most important thing is to tell believers: "You're going to be judged by God, but we're not going to judge you."