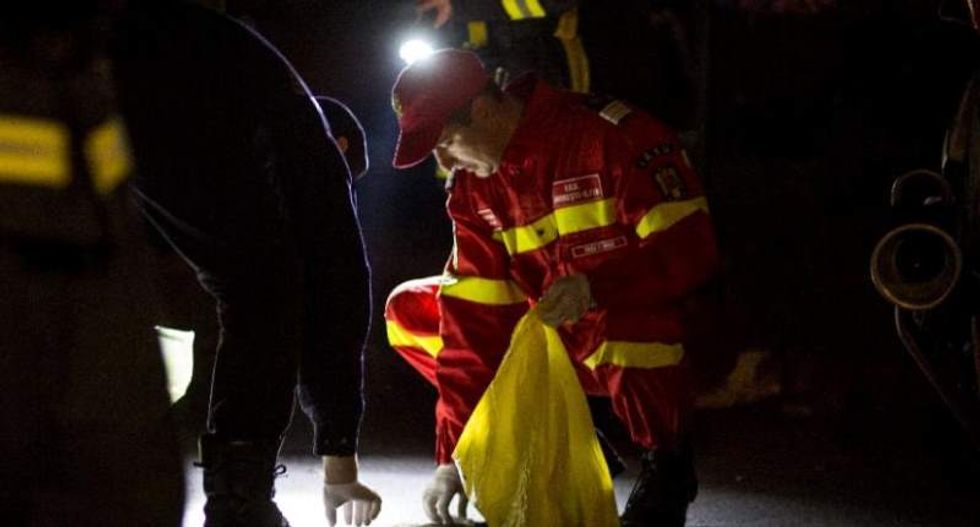 Emergency services and police collect evidence at the scene after at least 27 people were killed and more than 150 injured when a fire ripped through a nightclub in Bucharest on Oct. 31, 2015. Photo by Andrei Pungovschi for Agence France-Presse.

At least 27 people were killed and more than 150 injured after a fire ripped through a nightclub in Bucharest, government officials said.

The blaze broke out at the Colectiv night club in the Romanian capital at around 11:00 pm (2100 GMT), as some 200 people had gathered to hear a gig by rock group Goodbye to Gravity promoting their new album.

Witnesses quoted by local media said an explosion occurred when fireworks were let off as part of the show, sparking a violent fire and causing panic in the crowd.

Police have started an investigation into the incident, and in the early hours of Saturday morning groups of sombre-faced officers were still sifting through evidence outside the club.

Interior Minister Gabriel Oprea said a meeting had been called of a national emergency committee, which would include representatives from across the government.

President Klaus Iohannis said he was "shocked" by the incident, adding that he was in "deep pain following the tragedy that took place this evening in the centre of the capital".

"It is a very sad moment for our nation," he said in a post on his Facebook page, expressing his "solidarity and compassion" for the families of the victims.

The interior ministry said 27 people had died so far, raising an earlier toll of 25, while more than 160 injured people were being treated in several hospitals in the capital.

Oprea branded the incident a "tragedy" and his ministry said several telephone lines have been set up to keep friends and family of those hurt informed.

A Facebook page has already been set up calling on Romanians to donate blood.

"A tragedy has happened this evening in Bucharest. There is currently enough blood, but tomorrow we will need all of you," said a statement on the page, encouraging people to head to the city's blood transfusion clinic in the morning.