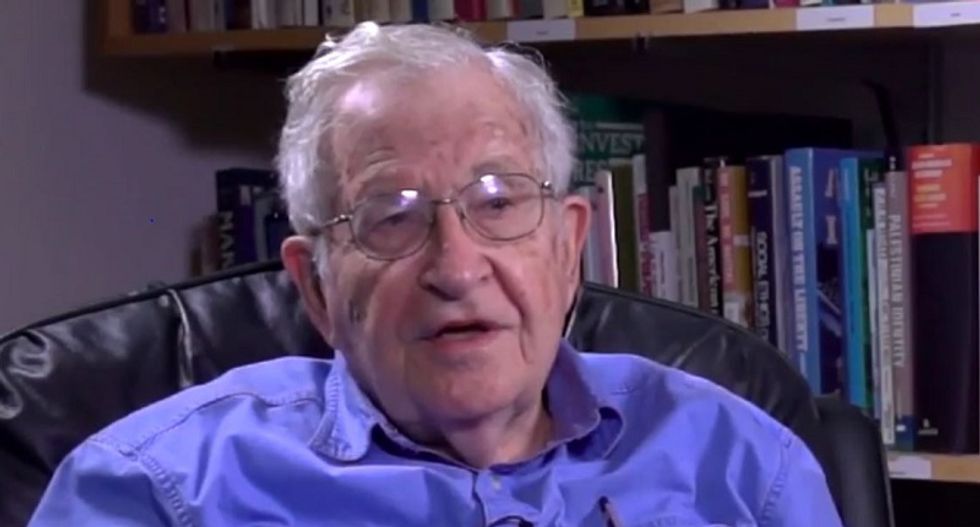 Noam Chomsky, MIT professor, linguist and philosopher, said in a recent interview with Latin American news provider teleSUR that the modern Republican party has "abandoned any pretense of being a normal political party" in favor of being extreme ideologues.

"The [American political] spectrum is broad but in an odd sense," Chomsky said in the interview, posted Saturday. "The spectrum is basically from center to extreme right -- extreme right. Way off the spectrum. So the Republican party about 20 years ago basically abandoned any pretense of being a normal political party."

He said "distinguished, respected conservative commentators" have described the current GOP as a "radical insurgency which has abandoned parliamentary politics" whose only policies are "don't do anything or bomb."

Chomsky said during the neoliberal period -- which scholars think of as starting with Margaret Thatcher in the United Kingdom and Ronald Reagan in the U.S. in which the private sector was strengthened via deregulation and privatization -- both the Democrats and Republicans shifted to the right.

"The Republicans just went off the spectrum," he said. "They became so dedicated to the interests of the extreme wealthy and powerful that they couldn't get votes."

Their solution has led to the spectacle today where the idea of a "moderate Republican" seems impossible, as the party's base demands more and more intransigence and extreme positions on issues like LGBT rights and social welfare programs.

"They had to turn to other constituencies which are there but were never politically mobilized," Chomsky said. "The Christian evangelicals, the nativists who are afraid 'they're taking our country away from us,' people who are so terrified they have to carry a gun into a coffee shop. That's their base, essentially."

There are no GOP candidates that have even a "semblance of rationality" competing for the nomination, he said.

He pointed out that Democrats have shifted too, and President Dwight Eisenhower would by today's standards be considered a Democrat, instead of a moderate Republican.

In the rest of the roughly 25-minute interview, Chomsky discusses U.S. foreign policy and the need for a popular social justice movement to continue beyond the presidential election.

When asked by journalist Abby Martin what people should be focusing their energy on, Chomsky said the Bernie Sanders campaign.

"He's doing good and courageous things, he's organizing a lot of people. That campaign ought to be directed to sustaining a popular movement which will use the election as kind of an incentive, then go on," he said. "And unfortunately, it's not. When the election's over, the movement is going to die. And that's a serious error."

Watch the entire interview, as posted by teleSUR English, here: