NYC hipsters spend $50 on ‘juice crawl' parties: ‘Your inner 5-year-old gets to have a mother-freakin’ blast’ 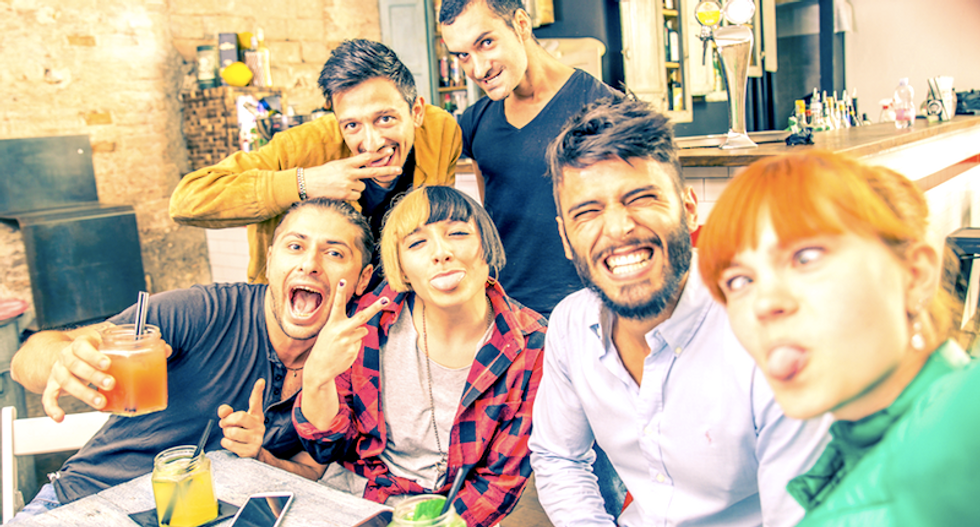 Hipsters having fun and partying (Shutterstock)

It is the responsibility of the young to annoy their elders and prance uninvited upon their lawns.

One particularly vexatious group of New York City hipsters is dancing on a lot of metaphorical lawns (wheat grass only, please) with a new, if not trend, then an activity joined by enough participants that a Twitter account has been created, as is customary, and T-shirts presumably printed up, as well.

It is also the responsibility, then, of journalists to notice such things and alert the general public, and so the New York Post reported on the "juice crawl" trend, which the newspaper warns is "the death knell of New York nightlife."

A juice crawl is, as the lamentation suggests, exactly what you think it is: young people traveling from bar to pub, drinking juice unadulterated by alcohol.

The reality is even more horrifying.

“It’s better without booze because you’re using your natural life-force energy, and I think that’s so important,” said Leora Edut, of Long Island City. “Your inner 5-year-old gets to come out and have a mother-freakin’ blast!”

The participants -- described by the Post as "a mix of hipsters, NYU kids, a few hard-core veggie lovers and precocious underage thrill-seekers" -- started with a "pregame" juice made from kale and coconut water at an establishment called, by way of warning, Rawpothecary.

Tickets for the event -- which also doubled as a "quiet clubbing" party that allowed participants to wear headphones playing all the same songs -- range from $15 to $50.

The headphones-wearing group grooved quietly to the beat of the same drum before swarming a Samsung store to dance around an irritated security guard.

The juice-sipping hipsters finished their night, as one does, at an art gallery to sing along to the Backstreet Boys' hit, "I Want It That Way," in that way that only true '90s kids can understand.

Intoxicant-free variants of popular activities normally associated with intoxicants are nothing new.

Some of us have read articles about drug-free raves, although no one has ever met anyone who went to one, and everyone has a friend whose urine turned day-glo yellow from overloading on vitamins after reading about "smart drugs."

There are even some people who insist you don't need psychedelics to enjoy a Phish concert, but whatever.

Ian MacKaye, the ethical face of the drug-free punk lifestyle, argued in the Minor Threat song, "Straight Edge," that he had "better things to do than sit around and f*ck (his) head."

But it's not clear from the Post's report that juice crawlers agree this maybe-trend is such an activity.

"One crawler wearing a 'Vegan' T-shirt and Vibram 'FiveFingers' shoes discreetly ducked into Blue & Gold Tavern across the street," the Post reported. "He emerged a few minutes later looking mighty pleased with himself."

A friend asked if he'd done a shot but was met with stony silence, but the group's guide pressed him for more details: "Two shots?"

"The buzzed vegan gave a big thumbs up," the newspaper reported.

Meanwhile, the true heirs to DeeDee Ramone are sitting in adult preschool, tripping balls on smuggled 'shrooms like some Animal Collective song come to life.