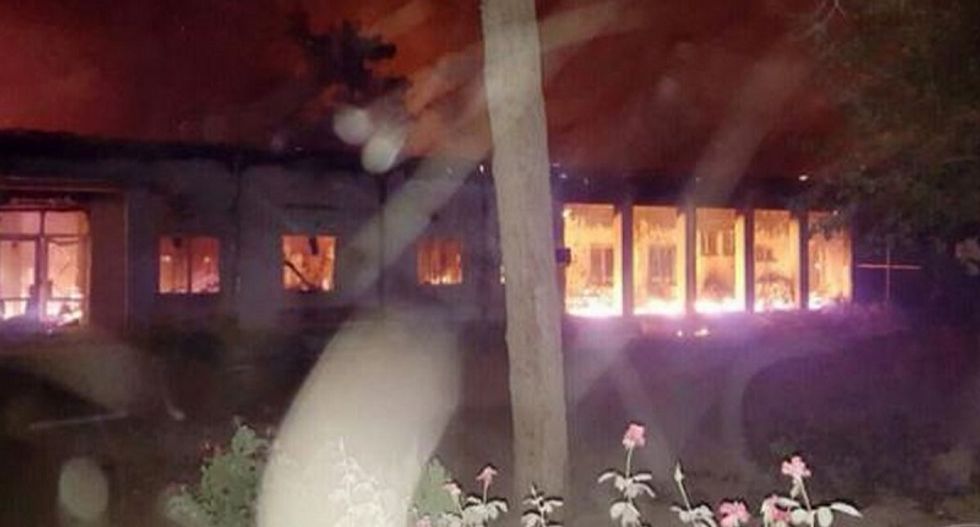 AFP/MSF/AFP - Photograph released by Medecins Sans Frontieres (MSF) on October 3, 2015 shows fires burning in part of the MSF hospital in the Afghan city of Kunduz after it was hit by an air strike

US President Barack Obama offered his "deepest condolences" over a suspected US airstrike on a hospital in the Afghan city of Kunduz that killed 19 people, and promised a thorough probe of the incident.

"On behalf of the American people, I extend my deepest condolences to the medical professionals and other civilians killed and injured in the tragic incident at a Doctors Without Borders hospital in Kunduz," he said in a statement released by the White House.

"The Department of Defense has launched a full investigation, and we will await the results of that inquiry before making a definitive judgment as to the circumstances of this tragedy," Obama said.

"I have asked the Department of Defense to keep me apprised of the investigation and expect a full accounting of the facts and circumstances," Obama said.

"Michelle and I offer our thoughts and prayers to all of the civilians affected by this incident, their families, and loved ones."

He added: "We will continue to work closely with President (Ashraf) Ghani, the Afghan government, and our international partners to support the Afghan National Defense and Security forces as they work to secure their country."

'No divorcing' the GOP from 'disgusting' racism and fascism after Orban's CPAC display: former party operative

On Friday's edition of MSNBC's "The Beat," Kurt Bardella — a former GOP operative and Breitbart staffer turned Democratic adviser — laid into Republicans at CPAC in Dallas for cheering on speakers openly promoting Christian nationalism and the erosion of democracy.

One of the key moments from that gathering was a speech delivered by Viktor Orbán, the strongman prime minister of Hungary.