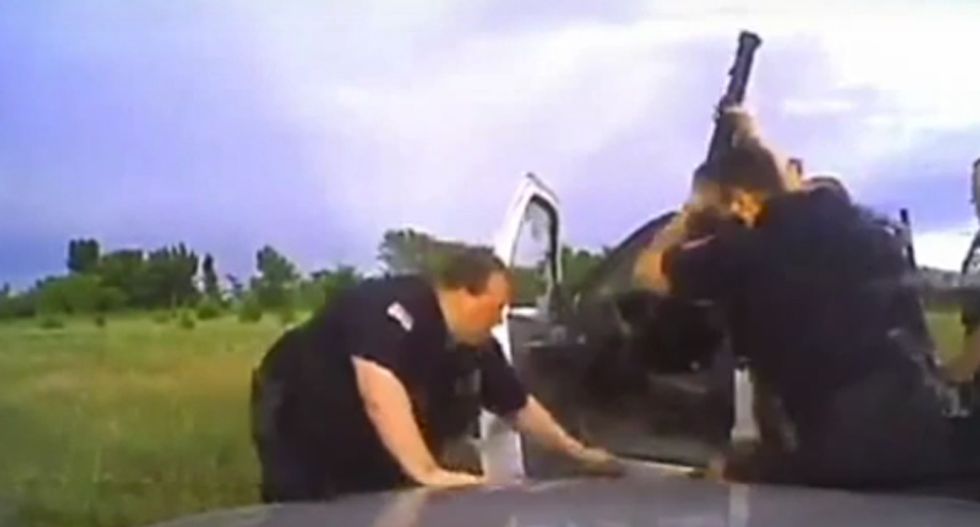 An Oklahoma cop has been charged with felony assault after beating a suspect with the butt of a shotgun while other officers held him down, Tulsa World is reporting.

Owasso Police Lt. Michael Dwain Denton, 49, has been suspended and faces assault and battery with a deadly weapon and reckless conduct with a firearm following a high speed car chase on June 14, caught on a police cruiser dash cam.

In the video, officers can be seen warily approaching a truck driven by a suspect identified as Cody Matthews.

With fellow officers aiming their weapons at the truck, one officer breaks the driver-side window using his baton. Denton can then be seen entering the picture and using the barrel of his shotgun to strike Matthews in the face before officers drag the man out of the vehicle.

As Mathews is dragged to the ground by multiple officers, Denton once again can be seen standing above the prone Mathews and using the butt end of his shotgun to repeatedly strike Mathews, as well as one of his fellow officers.

According to prosecutors, Denton demonstrated a “conscious disregard” for the safety of other law enforcement officers and created a “situation of unreasonable risk” for his fellow officers and Mathews by using the shotgun.

“Essentially, striking anybody in the head with a hard object is considered deadly force. And you can only use deadly force in a circumstance where it’s justified,” explained Kevin Buchanan, district attorney for Nowata and Washington counties.

Equally concerning to Buchanan was Denton shoving the barrel of the gun -- approximately nine times --into Mathews' truck.

“There are two things that cause me concern, and one is the shotgun barrel through the window,” Buchanan said. “He was striking the person that had been stopped with what I’ll call the business end of the shotgun, as well as one of police officers who was trying to take that man into custody.”

This is not the first time Denton has been accused of brutalizing a suspect.

In 2011 he was fired after video (seen below) showed him mocking a handcuffed suspect before repeatedly elbowing him in the face.

Denton sued for reinstatement and an appeals court ordered him reinstated with back pay totaling  $366,000.

The officer is expected to surrender himself Monday morning following the Friday indictment.

Watch the car chase video below from Tulsa World: