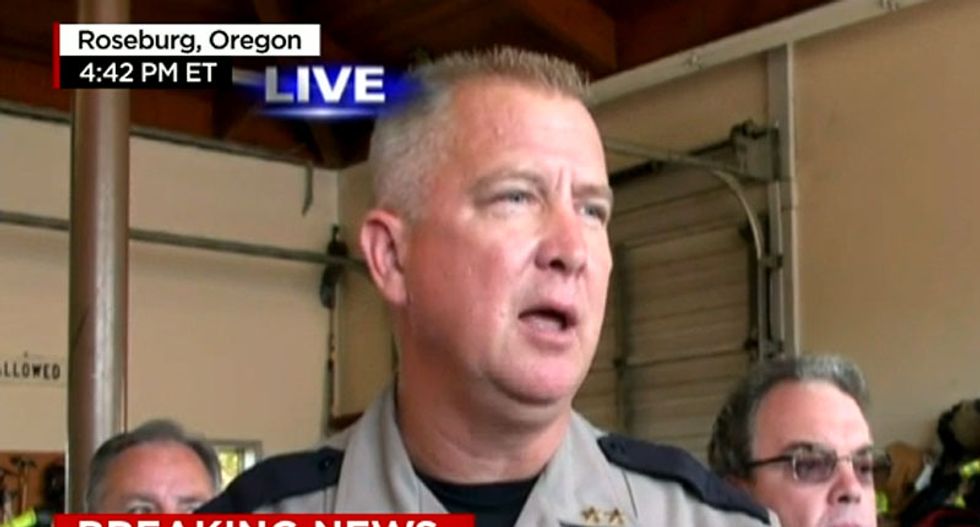 The Oregon sheriff investigating the execution-style killing of at least nine people in a college classroom refused to identify the suspect on Friday, saying he wanted to deny the shooter notoriety, the ultimate prize he sought in the bloodshed.

A day after the shooting at Umpqua Community College in Roseburg, residents of the quiet former timber town struggled to comprehend the deadliest mass killing this year in the United States. The gunman also wounded seven people in the rampage and died in an exchange of gunfire with police.

Law enforcement sources confirmed reports identifying the suspect as Chris Harper-Mercer, 26, who lived with his mother in nearby Winchester.

In a blog post linked to him, Harper-Mercer said he relished the headlines garnered by Vester Flanagan, the man who shot dead two reporters during a live broadcast in Virginia in August before killing himself.

"A man who was known by no one, is now known by everyone ... Seems the more people you kill, the more you're in the limelight," the post read.

In a highly unusual step, Douglas County Sheriff John Hanlin vowed never to utter the gunman's name and said he would let the coroner identify the gunman.

"I don't want to glorify his name. I don't want to glorify his cause," Hanlin, an outspoken defender of gun ownership, told CNN. The gunman stormed into a classroom at the college that serves mostly older students in career transitions, shot a professor at point-blank range, then ordered cowering students to stand up and state their religion before he shot them one by one, according to survivors' accounts.

Oregon Governor Kate Brown declined in television interviews on Friday morning to discuss gun control, as did the sheriff, and said it was a time for healing the community.

A month after the December 2012 mass shooting at Sandy Hook Elementary School in Connecticut, Hanlin wrote a letter to Vice President Joe Biden that defended the right to bear arms, protected by the Second Amendment of the U.S. Constitution.

"Gun control is NOT the answer to preventing heinous crimes like school shootings," Hanlin wrote in the letter, dated Jan. 15, 2013.

"Somehow this has become routine. The reporting is routine. My response here, at this podium, ends up being routine," he said. "We’ve become numb to this."

In a photo posted on what was believed to be the suspected gunman's MySpace profile, a young man with a shaved head and dark-rimmed eyeglasses stares into the camera while holding a rifle.

A man identifying himself as Ian Mercer, the gunman's father, told reporters outside his home in Los Angeles on Thursday night, "It's been a devastating day, devastating for me and my family."

Authorities offered no motive for the shooting. Hanlin said local homicide detectives and federal agents were conducting an investigation.

Not counting Thursday's incident, 293 mass shootings have been reported this year, according to the Mass Shooting Tracker website, a crowd-sourced database kept by anti-gun activists that logs events in which four or more people are shot.