Paul Ryan tells House GOP: I'll run for Speaker if all of you fall in line behind me 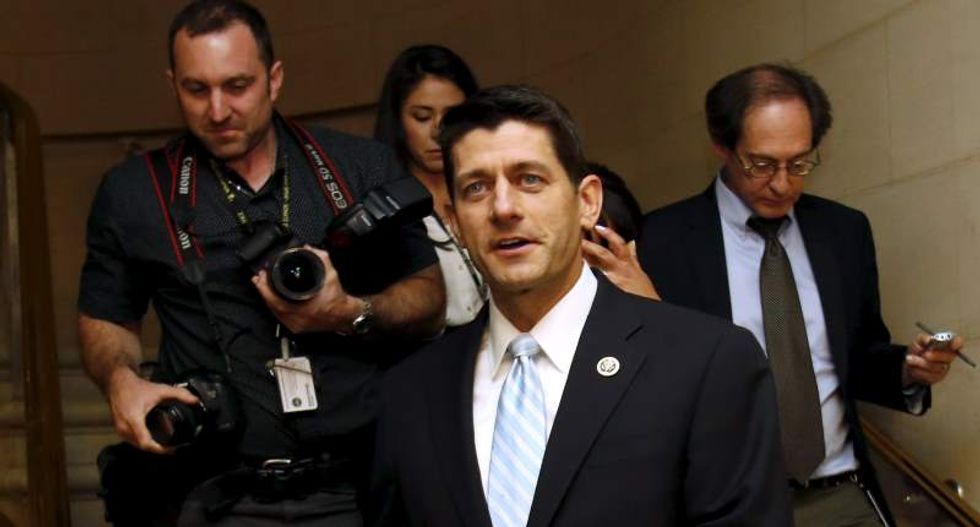 Representative Paul Ryan (R-WI) gestures as he walks on Capitol Hill in Washington on Oct. 20, 2015. Photo by Yuri Gripas for Reuters.

A reluctant Paul Ryan on Tuesday laid out a series of conditions under which he would seek to become speaker of the House of Representatives, replacing retiring Speaker John Boehner.

Following a week of near-seclusion in his home state of Wisconsin during a congressional recess, Ryan, a former Republican vice presidential candidate who is in his ninth term in the House, told his fellow Republicans that he might be willing to seek the top job in the House.

Ryan would do so, according to his spokesman Brendan Buck, only if he receives a clear message from the badly splintered Republican caucus that it would support him.

Earlier this month, House Majority Leader Kevin McCarthy bowed out of the race for speaker, saying he could not unify the party behind him as a small band of right-wing conservatives opposed him.

Besides seeking a clear message of support, Ryan laid down other conditions that could anger these conservative rebels who make up the House Freedom Caucus.

Specifically, Ryan wants a House rules change that would remove the ability of any member of the chamber to seek a vote to eject the speaker. Such a threat was hanging over Boehner in the weeks before he announced his resignation, effective Oct. 30.

Ryan also wants to be freed from some of the time-consuming tasks that Boehner performed while speaker since January 2011. Boehner spent many weekends traveling the United States seeking campaign donations for fellow Republicans.

Buck said Ryan "made clear that family comes first. And a successful speaker must be able to maintain a healthy work-family balance." Ryan has three young children.

Boehner is expected to announce on Wednesday the date for Republicans to nominate their candidate for speaker. It is not clear whether Boehner will have to delay his retirement until his successor is installed by the full House.

If Ryan decides at week's end not to run for speaker, it is unclear who would emerge as a front-runner, adding to the chaos that has plagued Republicans over the past month, since Boehner stunned Congress by announcing his resignation.

Leading members of the House Freedom Caucus met with Ryan as the House of Representatives reconvened and turmoil resumed over Republicans' inability to choose a new leader.

The Freedom Caucus, which has about 40 members, was key to Boehner's decision to retire, announced on Sept. 25, after being badgered for months by caucus members who accused him of not standing up strongly enough to President Barack Obama, a Democrat. The caucus also helped push McCarthy to drop out of the speaker race.

Ryan is considered the favorite among possible replacements for Boehner, although two other Republicans are announced candidates and some others have said they are considering running if Ryan does not.

Earlier Tuesday, Senate Democratic leader Harry Reid said he hoped Ryan would be the next speaker of the Republican-majority House of Representatives.

"It appears to me that he would be one of the people over there (in the House) that would be reasonable," said Reid, whose politics are anathema to many of the same right-wingers who battled Boehner.