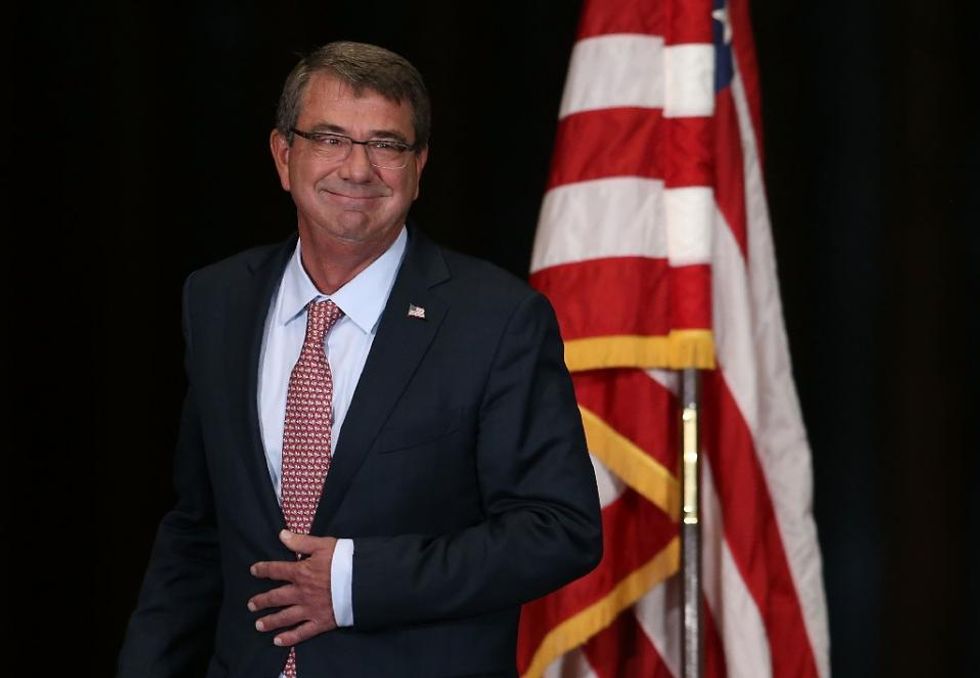 US Defence Secretary Ashton Carter arrived in Madrid on Sunday, beginning a European tour amid alarm over Russian bombardments in Syria and the refugee crisis sparked by the conflict.

He is also dealing with the fallout from a suspected US air strike on a hospital in the Afghan city of Kunduz that killed 22 people, some of whom burned to death in their beds.

"My reaction was I think the same as anybody's," Carter told reporters on the flight to Madrid, describing the situation as "confused and complicated."

"This is a tragic loss of life, your heart can only go out to innocent people that were caught up in this type of violence."

The five-day trip to Spain, Italy, Britain and a NATO ministerial summit in Brussels is intended to recognise the work of ally nations as they scramble to tackle the refugee crisis as well as respond to Russian aggression in eastern Ukraine.

The tour comes at a fraught time for Carter, who started in the Pentagon's top job in February and who faces pressure at home over Syria and a simmering scandal involving military officials allegedly cherry-picking intelligence.

The Kunduz incident adds to Carter's woes and he -- along with President Barack Obama -- has promised a full and transparent investigation.

A senior defense official said US special operations forces in an "advise and assist" role in Kunduz had been taking fire and called in air support from an AC-130. The plane opened fire but the military wasn't "positively certain" it hit the hospital, the official said.

While in Spain, Carter will visit a base in Moron de la Frontera, where a permanent force of 2,200 US marines has been established. The facility was bolstered in the wake of the 2012 attack on a US mission in Benghazi, eastern Libya.

The main mission of the Special-Purpose Marine Air-Ground Task Force Crisis Response (MAGTF) unit is to protect US embassies in Africa, evacuate civilians in difficulty, or intervene in conflicts or humanitarian crises.

Carter, 61, has been on the job for eight months but unlike some of his predecessors -- such as Donald Rumsfeld and Robert Gates -- he has not established himself as a household name.

Carter has appeared reluctant to stray from official White House talking points and critics say he is overly cautious in his public pronouncements.

The Pentagon is under massive pressure over its efforts to intervene in Syria. While the White House does not want to commit ground forces to another difficult Middle East conflict, opponents are outraged by what they see as a lack of US action to halt the war that has claimed some 250,000 lives and displaced millions.

America leads a coalition of more than 60 nations conducting daily drone and plane strikes against Islamic State jihadists in Syria and Iraq, but is not targeting the regime of Syrian President Bashar al-Assad.

The Pentagon is also trying to train moderate Syrian rebels to fight IS but the programme has been roundly denounced as a flop after some rebels gave ammunition to an Al-Qaeda-linked group and other fighters disappeared.

And a scandal has seen the Pentagon inspector general probe allegations senior military officials cherry-picked information to downplay the strength of the Islamic State group and Al-Qaeda's branch in Syria.

After Spain, Carter visits Sigonella in Italy, where a forward operating base for the MAGTF has been established. He will then meet leaders in Rome.

On Thursday, he travels to Brussels to attend a NATO summit expected to discuss Ukraine, Russia, Syria, Afghanistan and nuclear capabilities.

The US is helping train Ukrainian forces and has sent "non-lethal" military aid. On the ground, the security situation in east Ukraine appears to have improved in recent weeks with a truce between government troops and pro-Russian separatists largely holding.

He is also expected to discuss innovation. Carter, a physicist and a former Harvard University professor, has stressed the need for the US military to retain its technological edge.