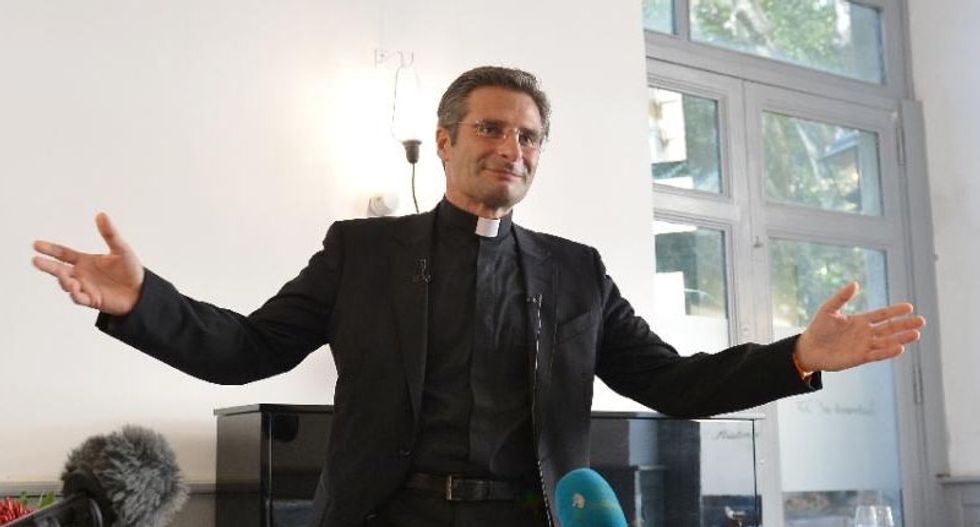 A Polish bishop has defrocked Father Krysztof Olaf Charamsa, pictured at a press conference on October 3, 2015, in the wake of his public declaration that he is gay and has a partner (AFP Photo/Tiziana Fabi)

A Polish bishop on Wednesday defrocked a high-ranking Catholic priest fired by a furious Vatican earlier this month after he came out as gay on the eve of a key synod on the family.

Bishop Ryszard Kasyna has decided that Krzystof Charamsa should no longer be able to celebrate mass, administer sacraments like communion and baptism or wear a cassock, according to a statement on the website of their northern Pelplin diocese.

Charamsa had held a senior position working for the Vatican office for protecting Catholic dogma, the Congregation for the Doctrine of the Faith.

The 43-year-old priest sparked outrage at the Vatican on October 3 by publicly declaring his homosexuality -- and presenting his Catalan boyfriend Eduardo -- on the eve of a bishops' synod set to touch on the divisive issue of the Catholic Church's relationship to gay believers.

Bishop Kasyna said he was forced to defrock Charamsa for failing to abide by his vow of celibacy following an earlier official warning.

"Considering Father Charamsa's lack of will to correct his behaviour and public statements indicating he will continue to break rules governing the behaviour of Catholic priests," the bishop decided to defrock him, the statement said.

"This penalty is intended to encourage Father Charamsa to mend his ways and can be rescinded depending on his behaviour," it said.

While Charamsa can no longer perform priestly duties, he has not been excommunicated, a move that would entirely banish him from the Catholic church.

After coming out, Charamsa presented a 10-point "liberation manifesto" against "institutionalised homophobia in the Church", which he said particularly oppressed the gay men who, according to him, make up the majority of priests.

He also revealed plans for a book about his 12 years at the heart of a Vatican bureaucracy only just recovering from a scandal under previous pope Benedict XVI over the influence of a "gay lobby" among senior clergy.