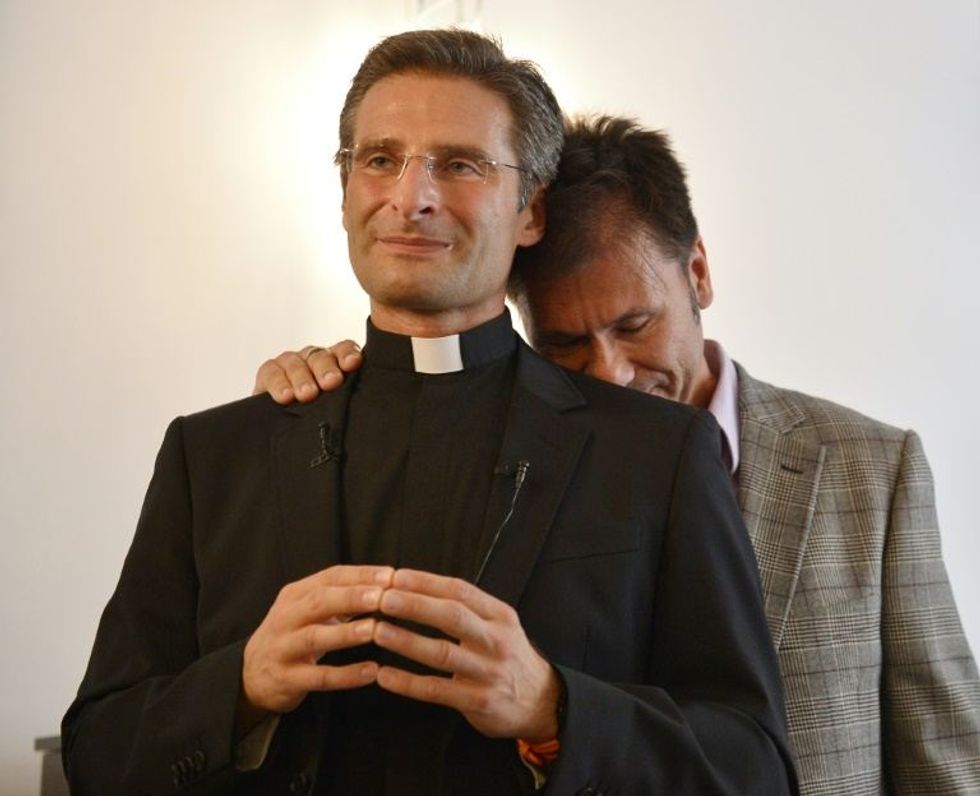 The Vatican reacted furiously to Polish priest Krzystof Charamsa's, pictured (L) with his partner, "very serious and irresponsible" declaration of his sexuality, saying he would be kicked out of his post as a theologian (AFP)

Pope Francis on Sunday defended marriage and heterosexual couples as he opened a synod on the family overshadowed by a challenge to Vatican orthodoxy by a gay priest.

During a mass to mark the three-week meeting of Roman Catholic bishops, the pope delivered a homily on "solitude, love between man and woman, and the family".

He referred to Genesis, the first book of the Bible, as a bedrock for understanding human relationships.

"This is God's dream for his beloved creation: to see it fulfilled in the loving union between a man and a woman, rejoicing in their shared journey, fruitful in their mutual gift of self," he said.

"God," the pope said, "joins the hearts of two people who love one another... (and) joins them together in unity and indissolubility."

The synod is the second and final round of a review of Catholic teaching on the family.

But the gathering of 360 participants has been overshadowed by a bombshell announcement by a Polish priest, Krzystof Charamsa, who works for the Vatican body that enforces Catholic dogma, the Congregation for the Doctrine of the Faith.

In separate interviews to Italy's Corriere della Sera and the Polish edition of Newsweek on the eve of the synod, Charamsa, 43, announced he was a practising homosexual with a partner.

"I know that I will have to give up my ministry which is my whole life," he told the Italian daily.

"I know that the Church will see me as someone who did not know how to fulfil his duty (to remain chaste), who is lost and who is not even with a woman but with a man!"

Charamsa said his decision to come out was motivated by concern for the Church's attitude to homosexuals, which he described as "backwards".

He presented a 10-point "liberation manifesto" against "institutionalised homophobia in the Church", which he said particularly oppressed the gay men who, according to him, make up the majority of priests.

The Vatican hit back, saying the timing of his "pointed statement" was "very serious and irresponsible, since it aims to subject the synod assembly to undue media pressure."

Charamsa will be unable to continue in his present job and his local bishop will determine "the other aspects of his situation", it warned.

Homosexuality is just one of a wide range of topics to be discussed at the synod, and some prelates have called for it not be included in the programme, according to Church sources.

Even before Charamsa's initiative, Catholic attitudes to sexuality were dominating headlines.

The Vatican confirmed on Friday that Francis had hugged an old gay friend and met his partner during his visit to the United States last month.

The highly symbolic gesture, indicative of what is seen as Francis's personally tolerant attitude towards gays, came a day before the pontiff met prominent gay marriage opponent Kim Davis -- another private encounter in the United States that the Vatican said did not indicate support for her stance.

Last year's first round of the synod sparked controversy when reformers tried to push through a statement that loving same-sex relationships had qualities the Church should recognise.

After a backlash from conservatives who regard homosexuality as a kind of sickness, that groundbreaking phrase was excised from the final conclusions.

Official Catholic doctrine holds that homosexuality is an "intrinsic disorder", but progressive theologians have recently come to accept that sexuality is innate, a premise that makes it harder to maintain a stance of outright condemnation.

At the heart of the synod's agenda is Francis's belief that the Church must demonstrate mercy in its bid to address the gulf between what it currently says about marriage, love and sex and what tens of millions of its followers actually do every day.

In practical terms, that is most clearly articulated in a demand for Catholics who have divorced and remarried to be allowed to take communion and confess their sins, rather than being de facto excluded from the Church as they currently are.

Francis appears favourable to change on this issue, saying the Church must tend to the "wounds" caused by family breakdown rather than judging followers in "irregular" situations.

In Sunday's text, he said the Church must "search out... welcome and accompany" a person "who falls or who errs".

"A Church with closed doors betrays herself and her mission, and instead of being a bridge, becomes a roadblock," he warned.