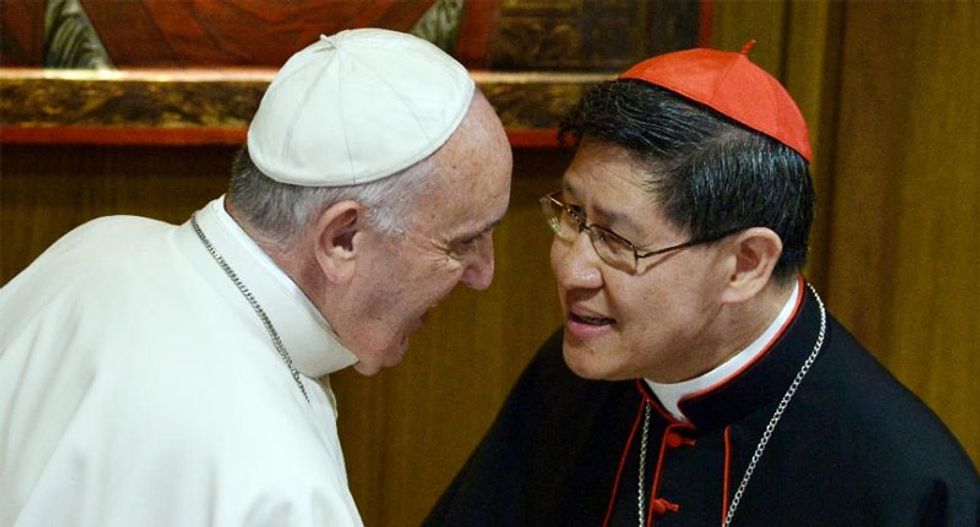 Pope Francis said Monday that the Church was "not a museum" but a place for progress, as members of a key synod started three weeks of debate aimed at reshaping Catholic teaching on the family.

Francis urged a spirit of "solidarity, courage and humility" as the Catholic Church's conservative and liberal wings began tackling hot-button topics from communion for remarried divorcees to acceptance of homosexuality.

The 78-year old reminded an audience packed with red-hatted cardinals and purple-sashed bishops that the Church was "not a museum to keep or preserve.

"It's a place where the holy people of God move forward," he told an audience that included a baby whose parents were among 18 lay couples participating in the synod.

At a mass Sunday marking the opening of the synod, the pope offered encouragement to both camps, defending marriage and heterosexual couples but also insisting the Church must have "its doors open to welcome all those who knock".

In an apparent boost to those who would have priests take a more merciful and inclusive approach to homosexuals, he said the Church must not "point the finger in judgement" of others, because doing so would "betray its mission".

But he has also said traditional marriage between heterosexual couples should be defended.

"The emotional intensity of the synod is amped up because of perceptions that the pope’s position is still a work in progress," Vatican watcher John Allen said.

"Whenever topics such as homosexuality and divorce are on the docket, feelings will run strong," he wrote for Cruxnow.

"What’s new now is a sense, however exaggerated, that movement might actually be possible. That's elicited strong passions both from those who see such movement as desirable, and those who view it as alarming."

The synod is the second and final round of a review of Catholic teaching on the family.

During last year's first round, language that would have seen the Church recognise the value of loving same-sex relationships was excised from the final working document that forms the basis for the talks here.

But the document does include a landmark statement that homosexuals must be treated with respect and that "all types of unfair discrimination must be avoided."

The gathering of 360 participants was overshadowed this weekend by the bombshell announcement by a Polish priest, Krzystof Charamsa, an official at the Vatican, that he is a practising homosexual with a partner.

The Vatican's ire -- which saw Charamsa fired from his post -- contrasted with the news of Francis's still close relationship with an old Argentinian friend and his gay partner, who were received and hugged by the pontiff in the United States last month.

"After his example, whatever the outcome of the synod it will be impossible for a priest not to welcome homosexual couples as the pope has... making them feel at home and gradually but progressively innovating Church mentality," said religious expert Piero Schiavazzi in the Italian edition of the Huffington Post.

He warned, however, that bringing the synod's opposing sides together on such issues was unlikely in the extreme.

"It would be easier to get Vladimir Putin and Barack Obama to agree... than cardinals Camillo Ruini and Walter Kasper," he said, referring to a staunch Italian conservative and a German liberal said to be close to Francis.

Homosexuality is just one of a wide range of topics to be discussed at the synod, and some prelates have called for it not to be included in the programme, according to Church sources.

Allen said the pope wants other threats to the family to be discussed, from "unemployment to war, environmental calamities, a culture of exaggerated individualism and consumerism, neglect of both children and the elderly".

"In his mind, the synod would likely be a failure if it doesn’t get around to considering those topics. If recent experience is any guide, the pope may have his work cut out for him," Allen said.