Rand Paul tells same-sex married couples: Keep your relationships out of the workplace 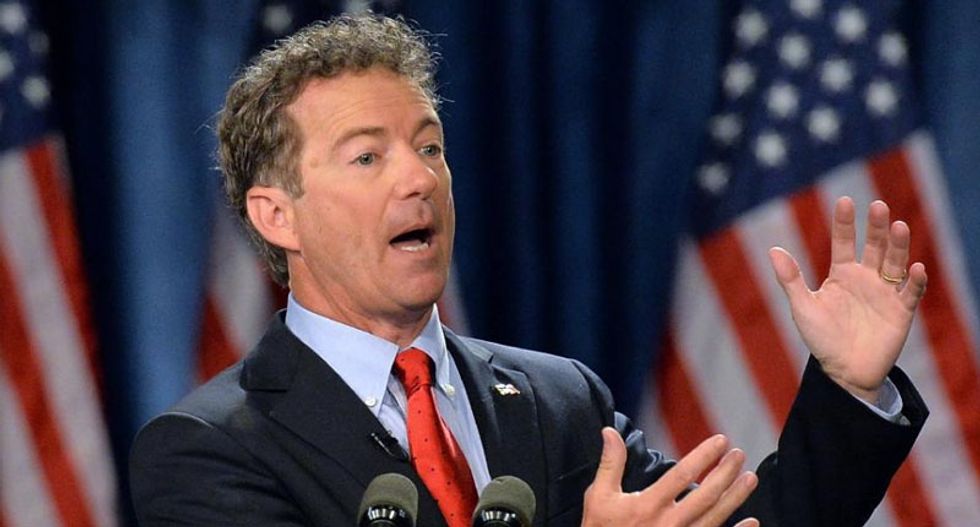 US Senator Rand Paul speaks to supporters during the kickoff of the National Stand with Rand tour on April 7, 2015 in Louisville, Kentucky (AFP Photo/Michael B. Thomas)

Sen. Rand Paul (R-KY) suggested on Wednesday that same-sex married couples should not openly mention their relationships at work, The Hill reported.

"I think really, the things you do in your house, if you leave them in your house, they wouldn't have to be part of the workplace," he said during an appearance at Drake University in Des Moines, Iowa.

Paul was responding to a question on whether employers should be legally allowed to fire LGBT employees because of their sexuality.

The Republican presidential candidate, who voted against a bill in July that would protect LGBT workers from discriminatory hiring practices, also argued that anti-discrimination laws are not necessary because they would create "a whole industry" of people looking to pursue lawsuits.

"Society is rapidly changing, and if you are gay, there are plenty of places that will hire you," he said. "I would say the vast majority of corporations already privately have manuals or work manuals that say don't discriminate in any way, and I think that to be the fact. So I'm really for the government not to be more involved in this situation."

Paul was immediately criticized by the Human Rights Campaign. The LGBT advocacy group noted in a statement that 31 states do not include sexual orientation or gender identity in their workplace discrimination laws.

"Rand Paul appears to be living in a different era," the statement read. "People should not be required to live in the closet or hide who they are in order to be treated equally and fairly under the law."

Watch footage of Paul's remarks, as posted online on Wednesday, below.

Rep. Eric Swalwell (D-CA) called for congressional action to hold former president Donald Trump and his administration accountable for their abuses of power.

The California Democrat, whose personal data was seized by Trump's Department of Justice, said the twice-impeached one-term president must face consequences for his abuses to ensure that future presidents aren't tempted to copy his playbook, just as Trump felt emboldened by Richard Nixon's pesidency.