‘Rehomed’ girls to appear on ’20/20’ to debunk Rep. Justin Harris’ claims about their demonic behavior 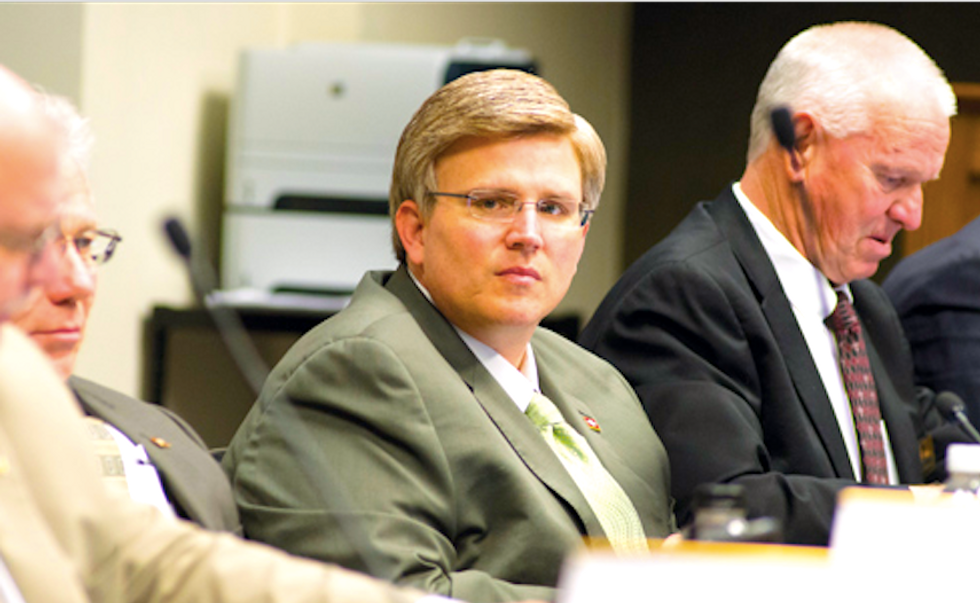 The briefly adopted daughters of state Rep. Justin Harris will appear Friday night on a television news program to repudiate the Arkansas Republican's claims that they are demonically violent.

The lawmaker took in three sisters in 2011 despite concerns that he and his wife were ill-equipped to care for the girls -- who had been abused -- but Harris apparently used his political influence to push through the planned adoption.

However, Harris and his wife believed the girls were possessed by demons and "rehomed" them less than two years later to an employee who is now serving a 40-year prison term for abusing one of the girls and two other children.

ABC's "20/20" will air a one-hour report on the story, including interviews with Harris and his wife, the couple who are now caring for the girls and the girls themselves.

"They’re so full of life," said "20/20" anchor Elizabeth Vargus during an interview with the Arkansas Times, which initially broke the story.

The anchor said she and her colleagues spent a full day with the girls and their foster family, and they never witnessed "any of this destructive, violent behavior that the Harrises allege."

Vargas said the adoptive family experienced difficulties in their first year caring for the girls, whose mother had a history of drug abuse and lived with a string of abusive men before she was deemed unfit to care for her children and asked Harris for help.

The girls' temporary foster family, caseworkers and others unanimously opposed Harris and his wife adopting the children because they were not trained to care for victims of sexual abuse, but the lawmaker claims his religious views were the real reason.

"They felt like we were a fanatical couple," Harris told "20/20." "That was their number one issue."

A judge granted the adoption, anyway, and the oldest, most seriously troubled girl moved into the Harris home in June 2012 while her younger sisters transitioned into the family over a six-month period.

The couple said the older girl, who was 6 at the time, threatened to kill people with knives, lashed out at her brothers and crushed a guinea pig to death.

"It never stopped -- just screaming -- and there were no tears," Marsha Harris said. "Just rage, screaming nonstop. This is what I'm dealing with eight to 12 hours a day."

A former babysitter told "20/20" the couple locked the middle girl in her bedroom for hours and blasted Christian music at the doorway to ward off demons, and she said the Harrises kept the younger girls separated because they believed they could telepathically communicate.

They even brought a group from Alabama to perform an exorcism over the girls, the former babysitter claimed -- although Harris disputes that.

"We are Southern Baptist," the lawmaker said. "We do not do exorcism, I'll be very clear about that. Period."

After reaching their "wits' end," Harris and his wife used a legal loophole to turn over the foster children to Eric Francis, an employee at their Christian day care, in October 2013.

"We've done all this counseling, and nothing is getting better, and I just said, 'God, I can't do it anymore -- we've done everything," Harris said.

Francis was later convicted of molesting the middle girl, who had been diagnosed with reactive attachment disorder, while his wife was out of town.

The two younger girls now 7 and 5, have been adopted by one family, who spoke to "20/20," and the oldest girl was adopted by another family and did not participate in the news program.

"These girls are not monsters, and they don’t like that people are calling them monsters," said Vargas, the anchor.

Vargas said the girls' first adoptive family and their new family did not experience the same behavior the Harrises claim, but she cautions viewers not to draw conclusions against the couple because "we can’t say what did or did not go on inside that house, because we weren’t there."

She said reporters and producers gave Harris an opportunity to address claims made by others during the news-gathering operation, but she was irritated that the lawmaker posted a photo on Twitter that gave the impression that "20/20" would vindicate his claims.

"I can’t speak for what Justin Harris believed," Vargas told the Arkansas Times. "When I posed for that picture with him … he did not tell me he planned to tweet that picture. That is not something we were particularly pleased with, but that happens. I don’t know his motives. He would have to speak to that."

The anchor did tell Harris that she had never seen a reaction to any news story quite like the response to the rehoming story.

"In all of my career of doing stories, many of them very controversial – and we went in and we spent days and days reading and watching all the commentary in response, largely, to your stories, (the Arkansas Times) reporting — I told him, 'I’ve never in my career seen a story where 100 percent of the comments that I have read thus far are negative -- about you, Justin Harris,'" Vargas said. "It was extraordinary, the backlash."

"Karl Rove says Texas’ abortion law is too extreme" was first published by The Texas Tribune, a nonprofit, nonpartisan media organization that informs Texans — and engages with them — about public policy, politics, government and statewide issues.

Liz Cheney says she will do whatever it takes to keep Donald Trump from the White House, even if it means leaving the GOP

By Matthew Choi, The Texas Tribune

U.S. Rep. Liz Cheney said she would do “whatever it takes” to make sure former President Donald Trump is not the GOP presidential nominee during the 2024 elections, including stumping for Democrats running against election deniers running as Republicans.

When asked by Texas Tribune CEO Evan Smith if she would consider running for president toward that end, the Republican congresswoman reiterated she would do everything in her power to prevent the former president from representing her party in the next presidential election.

“I certainly will do whatever it takes to make sure Donald Trump isn't anywhere close to the Oval Office,” Cheney said during the closing night of The Texas Tribune Festival.

Cheney, who lost to a Republican primary challenger in August but will continue as vice chair of the House Jan. 6 Committee until she leaves office in January, said she continues to identify as a Republican, celebrating the legacy of the likes of Ronald Reagan and Dwight D. Eisenhower.

But she said she would no longer be a Republican if Trump gets the party’s nomination in 2024.

“I'm going to make sure Donald Trump, make sure he's not the nominee,” Cheney said. “And if he is the nominee, I won't be a Republican.”

Cheney maintained that she is an ardent conservative on policy issues, voting in near lockstep with Trump’s legislative agenda when he was in office. But she warned a House Republican majority would give outsized power to members who have been staunch allies of the former president and his efforts to keep the White House, including U.S. Reps. Marjorie Taylor Greene, Lauren Boebert and Jim Jordan.

Cheney excoriated Trump for his failure to call off rioters at the U.S. Capitol on Jan. 6, 2021. She said without equivocation that any decision by the investigating committee about whether there should be criminal prosecution would be unanimous across the seven Democrats and two Republicans. She did not say whether the committee would decide in favor of a criminal prosecution.

“One of the things that has surprised me the most about my work on this committee is how sophisticated the plan was that Donald Trump was involved in and oversaw every step of the way,” Cheney said. “It was a multipart plan that he oversaw, he was involved in personally and directly.

“While leaders in Congress were begging him, ‘Please, tell the mob to go home,’ Donald Trump wouldn't,” Cheney said. “And just set the politics aside for a minute and think to yourself, ‘What kind of human being does that?’”

The committee is gearing up to wrap up its work in the coming weeks and is slated to meet this Wednesday for another public hearing, offering no details about what will be discussed then. She said next week’s hearing is unlikely to be the committee’s last, despite committee Chair Bennie Thompson, D-Miss., suggesting the opposite earlier this week.

When asked if she would like Trump to testify before the committee, she paused for a moment before offering the following: “Any interaction that Donald Trump has with the committee will be under oath and subject to penalty of perjury.”

Cheney suffered a precipitous loss in the Republican primary for her Wyoming seat for her role on the committee, and she said Saturday that she would not vote for the Republican nominee for her seat, Harriet Hageman, in the general election.

But she challenged the audience not to question her ability to keep fighting against Trump after she leaves the House.

When asked about her own presidential ambitions, Cheney demurred.

“It's really important not to just immediately jump to the horse race and to think about what we need as a country,” Cheney said.

Her criticisms aren’t limited to the former president. Cheney also flatly said she does not believe House Minority Leader Kevin McCarthy should ever become Speaker of the House, which would put him second in line to the presidency behind the vice president.

“At every single moment, when our time of testing came and Kevin had to make a decision … he’s made the politically easy-for-him, or the politically expedient, decision instead of what the country needed,” she said.

But Cheney didn’t give up hope in her party, saying: “I think we have to have a Republican Party that can be trusted to fight for” issues such as limited government and strong national security.

Cheney’s father, former Vice President Dick Cheney, is another vocal opponent of Trump. He called the former president a coward and the greatest “threat to our republic” in history in a campaign ad supporting his daughter’s primary run. Liz Cheney said that her father offered her a piece of advice on New Year’s Day this year: “‘Defend the republic, daughter.’ And I will,” she said.

This article originally appeared in The Texas Tribune at https://www.texastribune.org/2022/09/24/liz-cheney-texas-tribune-festival/.

Critics of mass incarceration are condemning a ruling handed down late Friday by a federal judge in Louisiana, who admitted the state's plan to send teenage inmates at a juvenile detention center to the notorious state penitentiary at Angola was "disturbing" even as she decided the plan could move forward.

Chief U.S. District Judge Shelly Dick ruled that the Office of Juvenile Justice (OJJ) can send two dozen children under the age of 18 from Bridge City Center for Youth, located outside New Orleans, to the Louisiana State Penitentiary, denying a motion brought by several law firms and the ACLU to halt the plan.