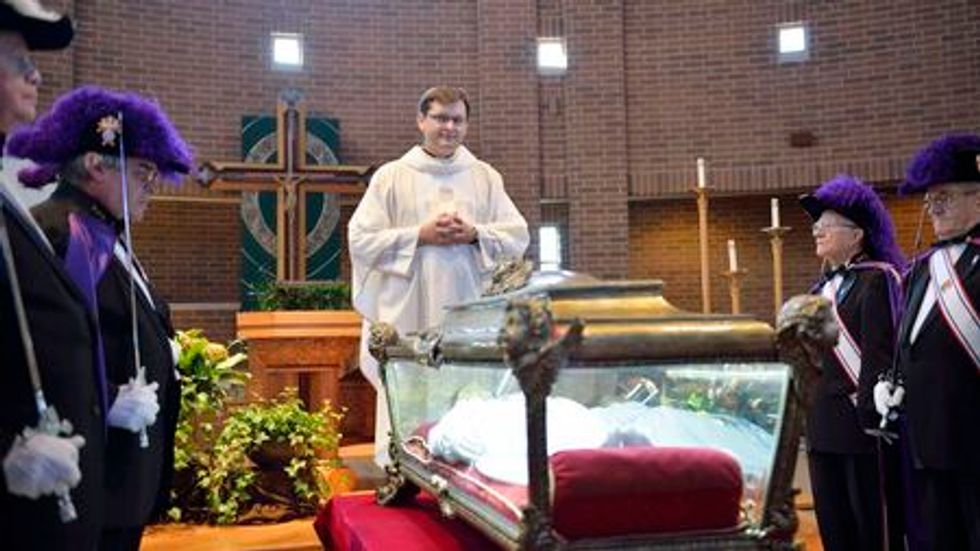 The Knights of Columbus, a lay Catholic men's group, stand guard over the remains of Maria Goretti, an 11-year-old Italian girl who is the youngest Roman Catholic saint in a ceremony officiated by Father Artur Sowa in Orland Park, Illinois October 14, 2015. REUTERS/Nikitta Foston

Thousands gathered at a church in suburban Chicago on Wednesday to visit a display holding the remains of Maria Goretti, an 11-year-old Italian girl who became the Roman Catholic Church's youngest saint.

The skeleton of Goretti, who was stabbed to death during an attempted rape in 1902, was encased in a wax statue lying inside a clear glass coffin. Viewers waited for hours to approach the display, and many were moved to tears. Goretti is seen as a symbol of forgiveness and mercy in a violent world.

The display at the St. Francis of Assisi church in Orland Park, southwest of Chicago, is part of a first-ever visit to the United States, and will take in 16 states. The remains also drew huge crowds at a viewing in Chicago on Monday.

Visitor Kathy McNolte, 43, said Goretti was an example of how violence could be met with mercy - a message she said was especially needed in Chicago, which saw 435 homicides in 2014, according to the Chicago Tribune.

"She showed mercy and we need to show that," said McNolte, who has three sons. "I'm here for my boys. They need someone to emulate. We need people who are kind and loving and forgiving to look up to."

Goretti was stabbed 14 times near Anzio, Italy, but asked forgiveness for her 20-year-old attacker before her death, according to the church.

"I forgive Alessandro Serenelli ... and I want him with me in heaven forever," she said in the hospital. After Serenelli's release from prison, he became a lay brother in a monastery.

The tour is a prelude to the "Year of Mercy," set to begin Dec. 8. It was declared by Pope Francis, leader of the world's 1.2 billion Catholics.

The display arrived early on Wednesday in a motorcade escorted by the Knights of Columbus, a Catholic lay group.

"Her presence here reaffirms the Christian faith in that there is forgiveness," said Patrick Allen, national coordinator for the tour. "She endured such agony and pain and yet had mercy."

Visitor Lorraine Kowalkowski said that while she was glad to see Goretti, violence in the city would not stop without parents teaching "care and respect" to their children.