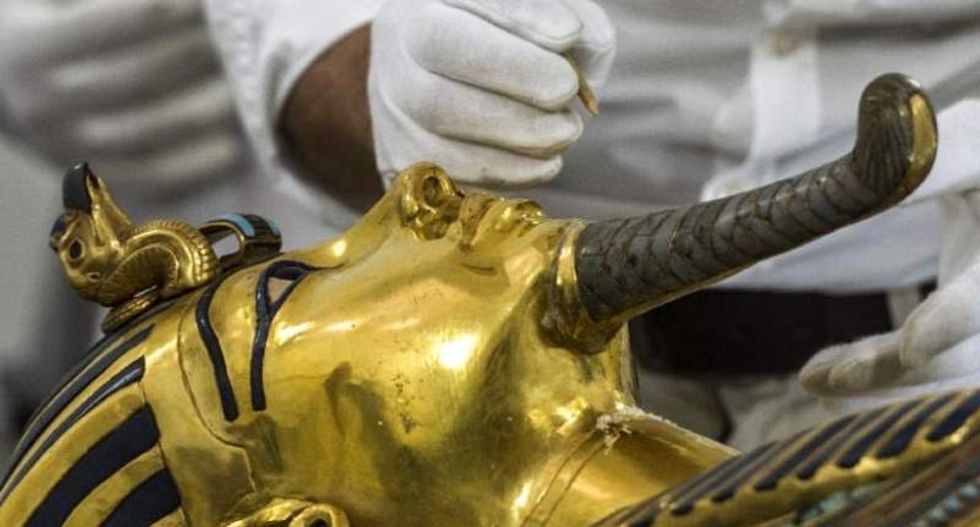 The golden mask of Tutankhamun is seen during restoration process by German specialists at the Egyptian Museum in Cairo on Oct. 20, 2015. Photo by Khaled Desouki for Agence France-Presse.

Restoration experts aim to have removed a crust of dried glue from the beard of boy pharaoh Tutankhamun's priceless golden mask by the end of the year, a German specialist said Tuesday.

The beard fell from the mask in an August 2014 accident at the Egyptian Antiquities Museum in Cairo, leading to its botched repair by employees.

The intricate operation "might be finished by end of this year or say in two months", Christian Eckmann, a specialist in restoration work on antiquities in glass and metal told reporters at a press conference held at the museum.

"We have not yet taken off the beard," he said.

The funerary mask is being restored in a room at the museum, and the golden relic with the beard still attached to it was shown to journalists as Eckmann's team worked.

The beard had fallen off when the mask was removed to repair the lighting of its display case.

In a hurried attempt to fix the beard, employees used too much epoxy glue to fix the relic, leaving a crust of the chemical behind.

Eckmann, who said on October 10 when the repairs started that the damage was reversible, said Tuesday that the restoration work would be carried out in two stages.

The beard would be detached and re-attached, followed by "a comprehensive study of the material used to manufacture" the mask.

The restoration work is being done manually, with the use of thin "wooden sticks" to remove the crust of dried glue, he said.

The death mask of the legendary boy king is one of the crown jewels of the museum, which also displays hundreds of relics from Tutankhamun's treasures, found in 1922 along with the pharaoh's mummy in the temple city of Luxor.

Tutankhamun, who died aged 19 in 1324 BC after a reign of nine years, is best known for the treasures found in his burial chamber, including the 11-kilogram (25-pound) solid gold funerary mask encrusted with lapis lazuli and other semi-precious stones.