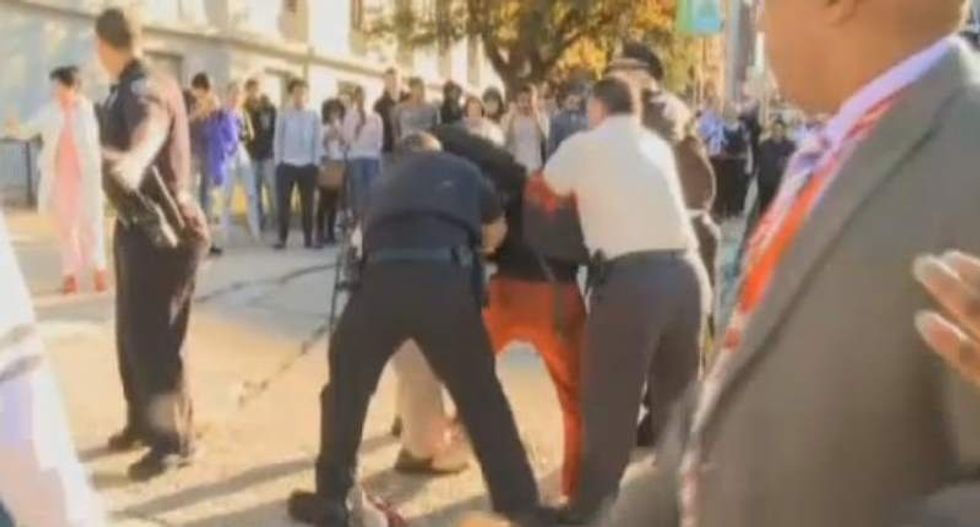 Police in Pawtucket, Rhode Island arrest someone during a protest at Toleman High School on Oct. 15, 2015. [WPRI-TV]

Police in Pawtucket, Rhode Island used pepper spray while arresting eight minors and two adults on Thursday during a protest touched off by a violent encounter caught on video, WPRI-TV reported.

"The message is for cops to ease up on kids," said one demonstrator, Montrell Sivils. "We shouldn't be treated as criminals."

The demonstration outside William E. Tolman High School, which reportedly drew around 100 students, was a response to footage of an officer slamming a 14-year-old student identified only as Tyler after handcuffing the boy's 17-year-old brother, identified as Evander.

The footage, shot on Wednesday, begins with Evander already on the ground. Within seconds, the officer can be seen wrapping his arm around Tyler's neck from behind and then throwing him down. Authorities said that the older brother was throwing punches at a wall before being handcuffed, an allegation he has denied.

Police have also said that Tyler approached the officer and threw punches at him, but that is not apparent in the footage. Both teens were charged with resisting arrest, though Ivander was also charged with simple assault.

According to WPRI, Thursday's protest began without incident until a fire alarm forced the school to be evacuated. A group of students were invited inside City Hall to watch the video of the siblings' arrests, but the crowd -- which had grown to around 200 students by then -- remained outside the building.

The demonstration then moved to a private business' parking lot, where authorities said one student broke a car window while others spat and threatened officers, prompting them to use their pepper spray.

Mayor Donald Grebien said that local police will work with state authorities to investigate the incident.

"I believe that we need to make sure this is a transparent process," he said. "There needs to be some open dialogue."

There are reportedly plans for another protest concerning the incident, possibly working with members of the Black Lives Matter movement.

"Whenever you talk about minors, it goes back to the training of policing across this nation," said a local activist, Gary Dantzler. "What is it showing?"

Watch WPRI's report on the protest, as aired on Thursday, below.