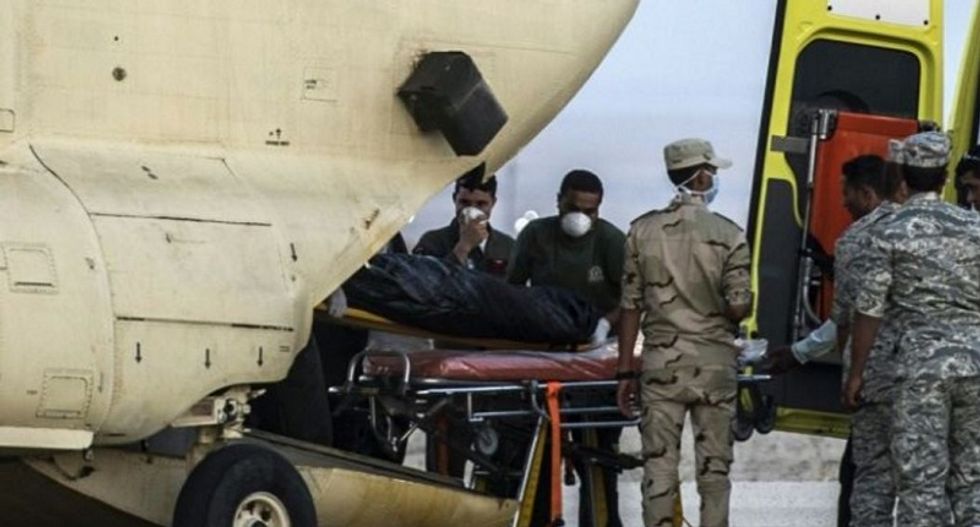 Egyptian paramedics load the corpses of victims of a Russian passenger plane crash in the Sinai Peninsula, into a military plane at Kabret military air base on October 31, 2015

A Russian airliner crashed in Egypt's Sinai Peninsula on Saturday, killing all 224 people on board, with officials launching a probe but swiftly downplaying a claim of responsibility by Islamic State militants.

The IS affiliate in Egypt said it was behind the crash of the flight run by the Kogalymavia airline, which operates under the name Metrojet, but did not give details and Cairo and Moscow both cast doubt on the claim.

Egyptian Prime Minister Sharif Ismail said experts had confirmed that a plane cannot be downed at the altitude the Airbus 321 was at, while Russian Transport Minister Maxim Sokolov said the claim "cannot be considered accurate".

Germany's Lufthansa, Emirates and Air France all said they would halt flights over Sinai until the reasons behind the crash became clear.

In March, the US Federal Aviation Administration had advised US civil aircraft to avoid flight operations in the Sinai below 26,000 feet.

The plane, carrying 214 Russian and three Ukranian passengers and seven crew, lost contact with air traffic control 23 minutes after taking off from the Red Sea resort of Sharm el-Sheikh, bound for Saint Petersburg.

"Unfortunately, all passengers of Kogalymavia flight 9268 Sharm el-Sheikh-Saint Petersburg have died. We issue condolences to family and friends," the Russian embassy in Cairo said.

Wreckage and dead bodies were found scattered over an area of six to eight square kilometres (two and a half to three square miles), around 100 km (60 miles) south of the town of El-Arish, Egyptian officials said.

The plane's black box data recorders have been recovered and sent for analysis, Ismail said. Late Saturday Russian Transport Minister Sokolov and Emergencies Minister Vladimir Puchkov arrived in Cairo with a team of experts to take part in an Egyptian-led investigation.

Two air accident investigators from France -- Airbus's home country -- are also to travel to Egypt along with six experts from the aerospace giant to help with the probe.

The IS affiliate waging an insurgency in the Sinai claimed that "the soldiers of the caliphate succeeded in bringing down a Russian plane", saying it was revenge for Russian air strikes against IS in Syria.

The charter flight was at 30,000 feet when communication was lost, according to an Egyptian official, and three military experts said IS in Sinai does not have surface-to-air missiles capable of hitting a plane at high altitude.

But they could not exclude the possibility of a bomb on board or a surface-to-air missile strike if the aircraft had been descending.

After not answering its phones for much of the day, Kogalymavia broke its silence with a statement offering condolences to the families of the victims.

"We will all need great courage to overcome these losses," it said.

Russia has declared Sunday a day of national mourning for the victims, who ranged in age from a 10-month-old girl to a 77-year-old woman.

Ella Smirnova, 25, said she had come to meet her parents.

"I will keep hoping until the end that they are alive, but perhaps I will never see them again," she said.

An Egyptian air traffic control official said the pilot told him in their last exchange that he had radio trouble, but Civil Aviation Minister Mohamed Hossam Kamal later told reporters that before the crash communications had been "normal".

"There was nothing abnormal... and the pilot didn't ask to change the plane's route," he said.

Russia has a dismal air safety record, with charter operators often under pressure to book to capacity on ageing jets in an attempt to cut costs.

The crash is likely to raise renewed concerns about the safety of air travel in a country with an ageing fleet of airliners.

The last major air crash in Egypt was in 2004, when a Flash Airlines Boeing 737 plunged into the Red Sea after taking off from Sharm el-Sheikh.

All 148 people on board, most of them French, died.

Millions of tourists, including many Russians, visit the resort, one of Egypt's major attractions famed for its pristine beaches and scuba diving.

But an Islamist insurgency has raged in north Sinai bordering Israel and the Gaza Strip since the army ousted president Mohamed Morsi in 2013.