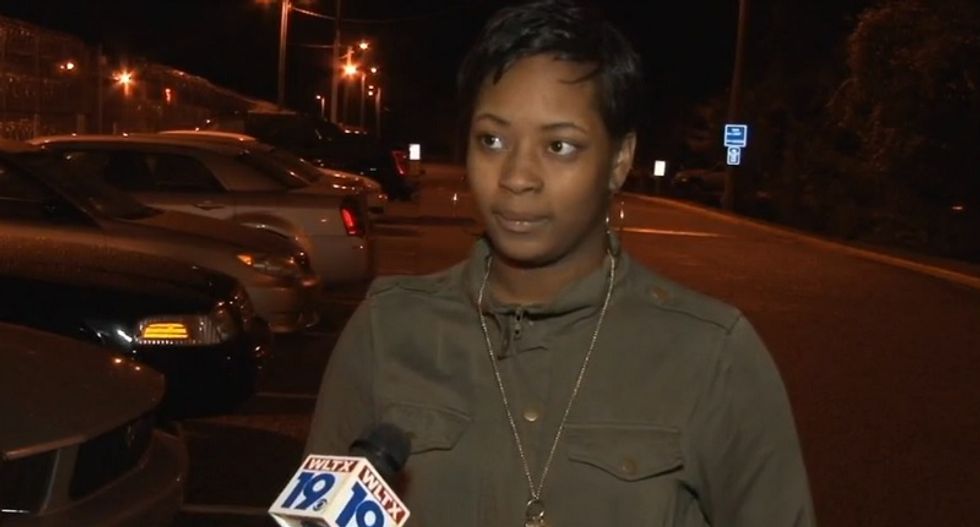 A South Carolina high school student who witnessed her classmate being physically abused by a school resource officer was arrested and held on $1,000 bond for filming the incident.

Niya Kenny, 18, told WLTX she was shocked and disturbed when she saw Officer Ben Fields flipping her female classmate out of her desk and pinning her to the ground for refusing to leave class.

"I was screaming 'What the f, what the f is this really happening?' I was praying out loud for the girl," Kenny told WLTX. "I just couldn't believe this was happening I was just crying and he said, since you have so much to say you are coming too. I just put my hands behind my back."

The video, posted Monday by New York Daily News writer Shaun King, shows Fields wrapping his arms around the neck of the pony-tailed girl. He then flips her desk over backwards and throws her onto the ground, saying "put your hands behind your back."

Kenny said her classmate is only about 5'6" and said she never saw anything like it before.

"A man used that much force on a little girl, a big man, like 300 pounds of full muscle," Kenny told the station. "I was like no way, no way, you can't do that to no little girl."

Her classmate wasn't participating in math class at Spring Valley High School in Columbia, and was asked to leave by the teacher. The girl refused, so the teacher called an administrator, who called Fields.

Kenny's mom, Doris Kenny, said her daughter was just standing up for the girl and said Field's actions were excessive.

Niya Kenny was charged with "disturbing school," which her mother questions.

"Who was really disturbing the school?" Doris Kenny asked. "Was it my daughter or the officer who came in to the classroom and did that to the young girl?"

Watch the WLTX report, as posted to YouTube by Loren Thomas, here: