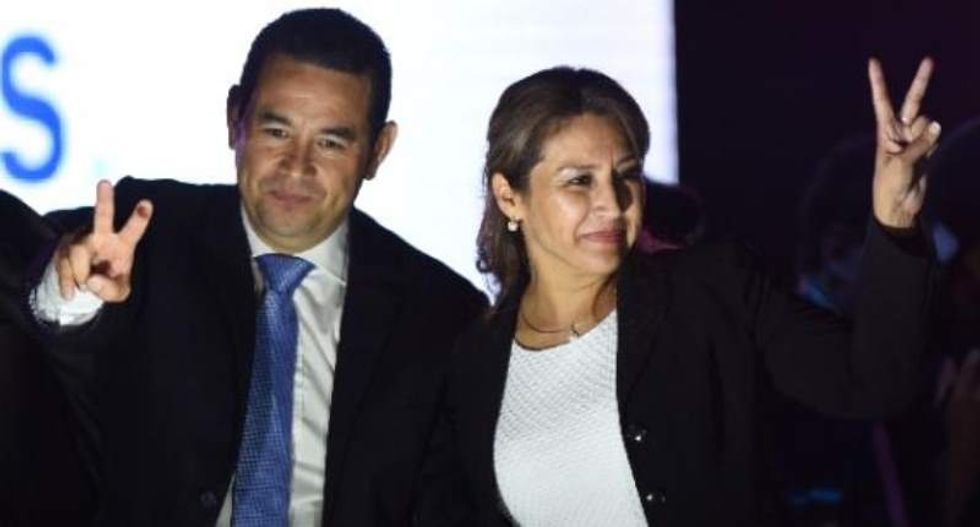 President-elect Jimmy Morales and his wife Hilda Marroquin greet supporters at a Guatemala City rally after his landslide victory in Guatemala's presidential race on Oct. 25, 2015. Photo by Johan Ordonez for Agence France-Presse.

Comedian and political neophyte Jimmy Morales, elected president of Guatemala in a landslide, faced the morning-after challenge Monday of restoring confidence in a state ravaged by corruption, gang violence and poverty.

The 46-year-old conservative swept to victory Sunday on a tide of voter outrage over a corruption scandal that felled his predecessor, Otto Perez.

"With this election you have made me president, I received a mandate and that mandate is to fight the corruption that has consumed us," said Morales on national TV.

"Thank you for this vote of confidence. My commitment remains to God and the Guatemalan people, and I will work with all my heart and strength not to defraud you."

Morales, a comic actor and TV personality who has never held elected office, now must set about governing an impoverished Central American country with little to work with but high public expectations and a deep yearning for change.

His conservative FCN-Nacion party holds only 11 seats in the 158-seat Congress.

"What we ask of the government is concrete results from the first day," said Jorge Briz, head of an umbrella group that represents the private sector. "We want to see a fight against corruption with measurable results."

Morales rode a wave of outrage with politics-as-usual in Guatemala, which is torn by gang violence and still recovering from a 36-year civil war that ended in 1996.

After a surprise first round win, he steamrolled over Sandra Torres, a former first lady and candidate of the social democratic UNE party, in Sunday's balloting.

Morales won 67 percent of the vote against 33 percent for Torres, according to final election results released Monday.

His economic team is to meet Monday with congressional leaders to lay out his spending priorities for the next year, including funding for nutrition programs, the resupply of public hospitals suffering from shortages of medicines, and support for production.

The president-elect has also pledged to increase funding for the public prosecutors to purge the government of corruption and to support the work of the UN-backed anti-corruption commission that led the investigation that nabbed president Perez.

His transition team, meanwhile, will meet with interim President Alejandro Maldonado, a former Constitutional Court judge who replaced Perez after he resigned and was arrested on corruption charges on September 3, three days before the first round of voting.

Perez, who is in jail awaiting trial, is accused of masterminding a corrupt network of politicians and customs officials that took bribes from businesses in exchange for illegal discounts on import duties.

Prosecutors and UN investigators say the network collected $3.8 million in bribes between May 2014 and April 2015 -- including $800,000 each to Perez and jailed ex-vice president Roxana Baldetti.

It was the latest in a string of graft scandals in a country where corruption accounts for 50 percent of political parties' funding and some $500 million in state funds goes missing every year, according to the Central American Institute for Fiscal Studies.

An estimated 54 percent of Guatemala's 15.8 million people live below the poverty line of $1.50 a day, and 6,000 people a year die as a result of violence, one of the highest murder rates in the world.

Public support for Morales may prove shallower than his huge election victory would suggest, as turnout was a relatively low 56.3 percent.

Famous for playing a country bumpkin cowboy who nearly becomes president, his real-life run was for a party founded by former military officers, including some accused of committing atrocities during Guatemala's civil war.

Morales has denied his party has any abusers in its ranks, but analysts say he will be under close scrutiny.

"The big challenge is to avoid any sign of corruption," said Cristhians Castillo, a political analyst at the Universidad de San Carlos. "That could generate protests once again."