Suburbanites are becoming the new face of homelessness in America 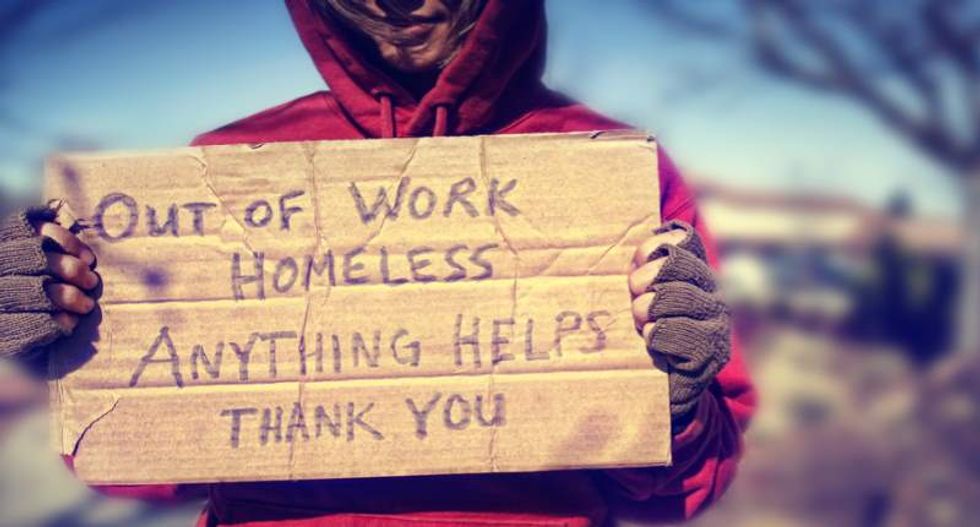 “People look at me and say, ‘You’re not homeless,’” says Rita Sharratt, a 57-year-old grandmother of three. “And I look right at them and say, ‘Yes I am.’”

Sharratt is sitting at a table at the New Life Evangelistic Center , a homeless shelter in the heart of downtown St Louis. New Life is a 25-minute drive from Bridgeton, Missouri, the quiet suburban town where Sharratt lived until 2013. In her former life, Sharratt was a telecommunications specialist, earning an average of $50,000-$60,000 a year. In 2000 her husband fell ill, and as his health worsened she quit her job to care for him full time. They lived off his retirement money and Social Security until February 2012, when he passed away.

That’s when everything fell apart. Sharratt, now in her 50s, couldn’t find a job in a St Louis economy decimated by the recession, and felt discriminated against due to her age. She burned through her savings, and in 2013 foreclosure on her house began. Sharratt discovered that her mortgage lender had sold her bank loan to another financial establishment, but had written it only in her deceased husband’s name.

“Bank of America would not talk with me to negotiate, no matter what I tried,” she recalls. “They said they couldn’t because my name wasn’t on the loan. In September 2013 they kicked me and my grandchildren out.”

Sharratt and her grandchildren lived in her car, searching for shelter, but there was nowhere for them to go. Not only is there no homeless shelter in Bridgeton, there are no homeless shelters anywhere in St Louis County, a region of over one million people (St Louis the city is not part of the county).

In late 2013, Sharratt was googling shelters at the library and discovered New Life. She has been living and working there ever since.

“I am far from the only person from the suburbs to be here,” Sharratt says. “More and more people are losing their jobs and it’s not because they’re doing something wrong, it’s because companies keep downsizing. People in the suburbs are losing their homes because the money is not there and the banks aren’t willing to negotiate. Middle class people that had never had this problem before are facing it all the time. People you would never think are homeless, are.”

Sharratt’s story is not unusual. Over the past 15 years, suburban poverty and homelessness have grown rapidly. Between 2000 and 2011 the number of poor residents in the suburbs of the US’s largest metropolitan areas grew by 64%. By 2008 the number of suburban poor exceeded the poor in cities by 1.5 million. Whereas once-poor city residents fled to the suburbs for a better life, impoverished suburbanites like Sharratt now rely on city shelters to take them in.

Megan Hustings, director of the National Coalition for the Homeless, says suburban homelessness is on the rise but is also hard to track.

“In suburban areas, what you’re seeing is a sort of invisible homelessness,” she says. “There aren’t good numbers that exist anywhere, but anecdotally we know that suburban homelessness is increasing, especially as cities become more expensive.”

In St Louis, New Life Evangelistic Center is under attack. The surrounding downtown area has gentrified, and nearby businesses and residents have protested the shelter’s existence, deeming it a public nuisance.

Reverend Larry Rice, who has run the shelter since it opened in 1972, sees a two-fold problem. St Louis County’s refusal to build a shelter has brought the suburban homeless to his door, as New Life is the only walk-in shelter in the region. At the same time, wealthy suburbanites have begun moving to his neighborhood, and they are determined to put New Life out of business. Tactics used to hurt New Life include banning porta-potties, thus making a homeless person more likely to be arrested for public urination, and requiring Rice to build a barrier around the building.

“The irony is that the homeless were here first,” Rice says. “People from the suburbs have started coming into the city to buy cheap property. But they want the homeless out of sight and out of mind. Don’t forget ‘gentrification’ is rooted in the word ‘gentry’. St Louis’s gentry, rich suburbanites, move their problems to our backyard and then they want to destroy our yard because they don’t like the people living in it. They’re hateful, vindictive, and vicious. They’re all white people, and they like to think of themselves as white progressives. But all problems have to be in someone else’s backyard. It’s a very racist issue.”

Rice, who says about 50% of New Life residents come from the suburbs, is fighting closure through demonstrations and the courts, which he claims are violating a Missouri law that says every county is obligated to provide a shelter. He says responsibility for the homeless has fallen to the police, who are unequipped to handle the rapid rise in suburban poverty.

“All the state programs have been cut and the police are left to solve the problems – they’re now the sociologists, the psychologists,” Rice says. “When people see a homeless person, they call the police. What do the police do with them? They take them to a different municipality so that it’s not their municipality’s problem anymore. They don’t let them sleep, they just tell them to move on – but they have nowhere to go, night after night.”

Homeless people at New Life come and go but some, such as Sharratt, have a deeper commitment to the organization. She is part of a two-year program that allows her to work at the shelter while living in an apartment in the city, provided by New Life, with her grandchildren. As her grandchildren struggle with the move from the suburbs – “They lost everything – their friends, their school, their home” – Sharratt struggles with stigma.

“The hardest thing at first was admitting that I was homeless,” she says. “It took a lot for me to do that, because of the way I was raised, because of the way suburban people think. But it can happen to anyone. One person ends up unemployed, and then you lose your house and everything else. The first thing is you deplete your savings, then your home, then you’re gone.”

Sharratt worries about the fate of New Life but like many there, she finds comfort in faith.

“Even though I’ve always had God in my heart, this experience has brought me closer to Him,” she says. “The Lord was homeless, after all. He slept out in the wilderness. So I think the Lord will not let anyone shut New Life down.”

Her new goal is to work at New Life as full-time staff. Homelessness has changed her perception of the world and her place in it.

“I want to help other people who are homeless,” she says. “This is the first job that has really meant something to me. In other jobs, money was the end game. But this work is for my soul.”