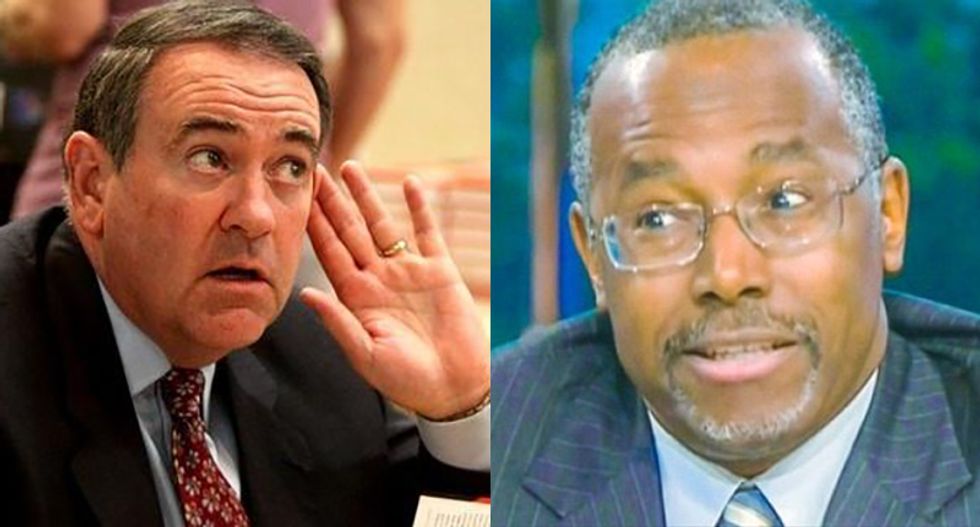 At the Republican primary debate on CNBC Wednesday night, candidate Ben Carson made claims -- which were rapidly debunked -- that he had no connection to Mannatech, a Christian-run company that sold bogus dietary supplements to the faithful.

However, Carson is not the only evangelical Christian in the GOP race making money by selling phony "cures" to gullible Christians. Former Arkansas Gov. Mike Huckabee has also come under fire for endorsing "Bible-based" cancer cures and a so-called "diabetes solution kit" designed to convince diabetics to stop taking their insulin and start taking herbal supplements like cinnamon pills.

During Wednesday night's debate, moderator Carl Quintanilla asked Carson, "This is a company called Mannatech, a maker of nutritional supplements, with which you had a 10-year relationship. They offered claims they could cure autism, cancer. They paid $7 million to settle a deceptive marketing lawsuit in Texas, and yet your involvement continues. Why?"

Carson responded, "Well, that’s easy to answer: I didn’t have an involvement with them. That is total propaganda. And this is what happens in our society -- total propaganda. I did a couple speeches for them. I did speeches for other people. They were paid speeches. It is absolutely absurd to say that I had any kind of relationship with them. Do I take the product? Yes. I think it’s a good product."

However, as Politifact pointed out, Carson is featured prominently in Mannatech promotional materials including infomercials and the company's home page.

Furthermore, the Wall Street Journal said that Carson wholeheartedly endorsed Mannatech supplements during those paid speeches, including remarks from a 2004 Mannatech sales convention like, "I started taking the product, and within about three weeks, my (cancer) symptoms went away."

In a 2013 Mannatech sales video, Carson said, "The wonderful thing about a company like Mannatech is that they recognize that when God made us, he gave us the right fuel. And that fuel was the right kind of healthy food.Basically what the company is doing is trying to find a way to restore natural diet as a medicine or as a mechanism for maintaining health."

Huckabee, for his part, signed on in February of this year as a spokesman for the "Diabetes Solution Kit," a video and guidebook that bills itself as an alternative treatment for Type II diabetes. Huckabee is an on-and-off dieter who has lost and regained hundreds of pounds over the last two decades.

As Ron Fournier said on CBS News, Huckabee is making "infomercials that are endorsing cures and treatments that no health agency supports. He's linking cancer to cures to Bible verse."

"Prescription drugs aren’t going to cure you," Huckabee said in one video. "They’re only going to keep you a loyal pill-popping, finger-pricking, insulin shooting customer so Big Pharma and the mainstream medical community can rake in over $100 billion a year annually."

“Let me tell you, diabetes can be reversed,” he said. “I should know because I did it. Today you can, too.”

Politifact: "(T)he video discusses at length the 'Double C Diabetes Remedy' of cinnamon and chromium picolinate, which is described as a 'weird, spice, kitchen cabinet cure' that 'will allow you to live life just like when you didn’t have diabetes at all.' Lon the narrator calls this precise combination of cinnamon and chromium picolinate a 'cornerstone' of the system."

Huckabee has testily defended his involvement in the company, saying it's more of a lifestyle manual and diet plan than an excuse to sell common household substances in pill form at inflated prices.

The New York Times commented in March that shilling vitamins is an "unconventional" choice in how to fund a campaign, and also described other money-making schemes in which the former pastor and Fox News host is currently engaged.

One ad arriving in January in the inboxes of Huckabee supporters, who signed up for his political commentaries at MikeHuckabee.com, claims there is a miracle cure for cancer hidden in the Bible. The ad links to alengthy Internet video, which offers a booklet about the so-called Matthew 4 Protocol. It is “free” with a $72 subscription to a health newsletter.

Another recent pitch sent out to Huckabee’s supporters carried the subject line “Food Shortage Could Devastate Country.” It promoted Food4Patriots survival food kits, described as the “No. 1 item you should be hoarding.”

Erstwhile Fox News personality Glenn Beck, conspiracy-mongering Texas radio host Alex Jones and disgraced televangelist Jim Bakker have all hawked end-of-the-world survival kits and bogus dietary supplements of their own. None of them, however, are currently running to be president of the United States.